If you're dreaming of a summer getaway to the Mediterranean, this special event at the Conrad Tokyo might be the next best thing. The hotel is hosting a Blissful Summer Sweets Buffet event on Saturdays, Sundays, and public holidays from June 5th until September 5th, and it includes various tastes of the region.

There will be 12 kinds of sweets that incorporate citrus fruits of the Mediterranean coast including lemon, bergamot, and blood orange, savory favorites like moussaka and souvlaki, and the beverages of your choice. Also, whilst not traditionally Mediterranean, it wouldn't be an afternoon tea styled event without scones - and yes, those are included, too.

The Blissful Summer Sweets Buffet is priced at 6100 yen per head, and reservations can be made via the Conrad Tokyo website.

The Conrad Tokyo is located just three minutes on foot from Shiodome Station. served by the Toei Ōedo Line and the Yurikamome Line. 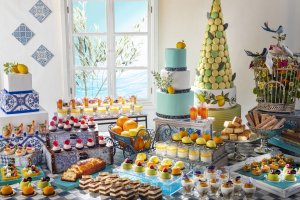