The dummy's guide to enjoying Kabuki

My first foray into Kabuki-za was a decade ago, and it was completely unmemorable. I was taking a friend on a stopover to India around Ginza aimlessly, and though neither of us were theater fans, we decided to see one act of the show since it was cheap. More of an incentive was a desire to get out of the hot sun. We had no idea what the stories were about, and readily accepted the English audio guide. Waiting in the lobby until the next intermission, we actually became excited, trying to decipher the cryptically English translated leaflet they gave us. We didn't have seats together, which we didn't mind as much as the fact that we both had rotten views. The static of the audio guide felt like an alien brainwash and I took it off before my migraine got worse. Peering over at my jet-lagged friend, she was clearly asleep or completely overtaken by the alien sound waves. For the price of a cappuccino, we got to rest our tired feet and my friend enjoyed her much needed nap. Also we got to spend time in Kabuki-za! However truth be told, I adore a good chat over gourmet coffee, so it would be years before I would venture into the hallowed halls of Japan’s most famous theater again.

Once in a while, I would catch a television documentary on the lives of famous Kabuki actors and I gradually became open to the idea of going to see a show again. This time it would be for the full show and I would actually know the plot. I waited another decade hoping someone would invite me to see a show. Finally, it was me who forked out over ￥20,000 per ticket to buy the best seat category. Unlike the cheap ones, we could hear the twang of the string instruments being plucked, marvel at the spectacular colors of the embroidered kimono, and watch the subtle expressions of the actors change. It was a favorite relative’s 70th birthday and she had done me countless favors through the years so this would be a lump sum display of gratitude. Our plan was to have lunch in Ginza before the matinee show, where she would give me a detailed explanation of the stories we would be seeing. That plan was foiled when she missed her train. Instead, I bought us lunch boxes – a two-decker colorful assorted one for her, one with sushi balls and beef cutlet sandwiches, a Higashi Ginza specialty, for myself. Boy, everything was all delicious! We remained in our seats during intermission to eat and she updated me on the plot. For our show, it would be a classic tale of Chushingura, based on the true story of which the 47 Ronin. It ended up being one of the most memorable experiences of my twenty plus years in Japan. However I am no way a convert to Kabuki. Actually, I’m back to hoping that someone will invite me along. Only now, much more eagerly than before!

My non-expert advice to enjoying Kabuki-za: 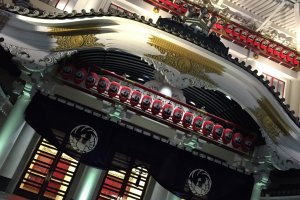 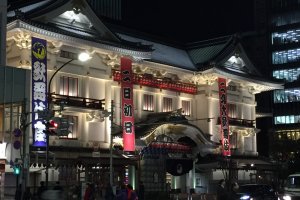 Sleiman Azizi a year ago
I saw Satomi Hakkenden once at Kabuki-za and absolutely loved it. I agree with the advice about putting away the translations and audio. Sometimes it's just better to not know and feel the performance. Perhaps some light reading before the show to give you a brief idea of the story and plot? Whatever you choose, kabuki really is a great experience.
Reply Show all 0 replies

Anne Lauenroth 4 years ago
I found the new subtitle system to be quite fantastic last summer, much better than the audio guide we had at the National Bunraku Theatre in Osaka. Not only is it less distracting from the performance, you can simply choose to not look temporarily when a scene gets too fascinating. It probably helps when you're used to watching foreign films and TV subbed or opera surtitled, but I imagine even without such prior experience it's still much better than the audio system. I would highly recommend the subtitle system.
Reply Show all 1 replies

Carol Akiyama Author 4 years ago
Thank you Anne for sharing your experience! It sounds really cool, an interesting innovation. Makes me want to go to one act just to fiddle around with it!
Reply

Param Pon 4 years ago
Good one.
Reply Show all 0 replies

Justin Velgus 4 years ago
Wasn't the Kabuki-za rennovated a few years ago? I think readers will appreciate your honest opinion, but I am curious: did you try the audio guide this time? Did you view the stage from the same seats as before? I want to know if anything changed to provide updated information. I have still not been so wondering.
Reply Show all 2 replies

Carol Akiyama Author 4 years ago
Justin, you brought up a great point about whether the renovations included updating the foreign language services! It seems that they have abandoned the old audio translations and give out a box with "subtitles." But I did not use it so I cannot comment on that. This is actually a blog post, not a guide or article, so it's more based on my own opinions and experience. But I will stand by my opinion that people should not go to a live theater to "read" from a box because it would take away from the experience of enjoying the actors and live music. I know I wouldn't use it. But if you ever go, try it and see which way you prefer and let us all know!!
Reply

Justin Velgus 4 years ago
Ah, thanks for clearing that up. I agree that people should watch and learn!
Reply
7 comments in total