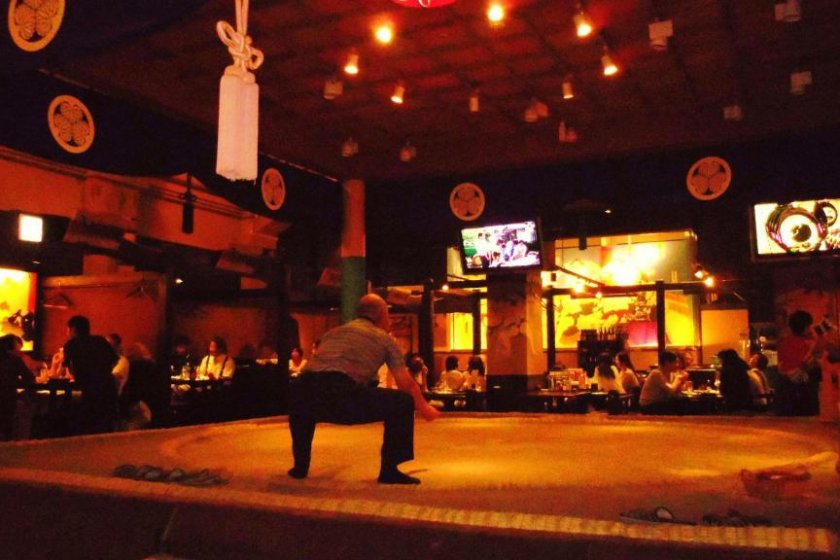 The sumo ring or dohyo

I love going out. Readers of my other articles will have already understood that. So when one of my roommates asked me to join his party I didn’t even try to understand why he was throwing it or where and when it was supposed to be before my head enthusiastically nodded.

My roommate booked a table at a sumo-themed izakaya (Japanese bar/restaurant) called Hananomai, close to our apartment in Ryogoku and full of promises about nomihodai (all-you-can-drink​) and tabehodai (all-you-can-eat). Naturally, you have to pay for this, and I gave a sour laugh when I saw the price of 3,980 yen on the website. My wallet was complaining, but I gave it a wink and hid it at the bottom of my bag. No more complaints! Especially since I was going to see real sumo!

It is kind of strange to eat while watching fights, but I really wanted to try. My roommate tried to explain first, that we were not doing tabehodai but only nomihodai, and second, that they would not fight. Whatever--my mind had already fixed on the idea.

In a group of 23 people, we went there, gasping. During nomihodai, you had better be thirsty if you want to make it worth the price! Unfortunately, we almost cried when our waiter told us that since we did not reserve for nomihodai, it was not possible to get it! We didn’t know about this when we booked.

Anyway, even this bad news would not ruin our great night, so we simply ordered our food and drinks. When the food arrived, we were impressed. Big plates of sashimi (with more ice that fish unfortunately), delicious takoyaki, sumo's infamous staple chankonabe, cooked octopus, pizza, pasta, meat--we were able to find everything. The drinks were nice too, but if you want to party, it is better to order nomihodai so it will be way cheaper!

In the end we had to pay around 3,000 yen per person. Still hungry, a few of my friends went to top up on ramen. I advise you to go to Hananomai with fewer people so you can order more without being too afraid of the bill. And book your nomihodai and/or tabehodai. The price is important, but the food is good.

No sumo fights were waiting for us, but we were treated to 4 men on the dohyo (outer ring) in the middle of the room. They first came to the closest tables, including ours. Curious, they asked where my friends and I were from before announcing it to all the room. Very elegant in their yukata (summer kimono), they were singing in Japanese. And believe me, you just have to close your eyes and your mind is taken out of your body, far away from the lights and the 21rst century, back to the samurai time when Japan was all green, scenery of rice paddies covered by fog at dawn. With a small effort--or just a big imagination--you can even feel the humidity of this fog, the small wind singing in the hills and the soft noise from the awakening village behind them.

These songs were really great to hear. People stopped eating to watch the singers and to enjoy their powerful voices.

The performance usually happens every Saturday, but it's better to check their website first. 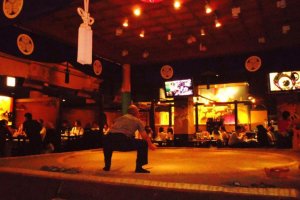 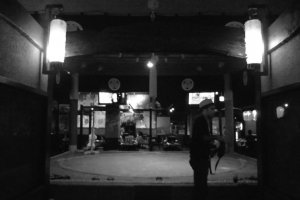 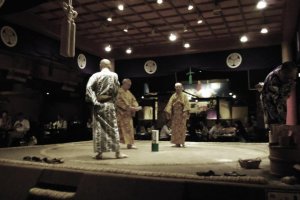 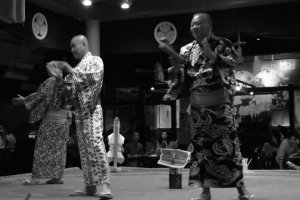 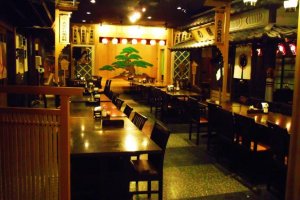 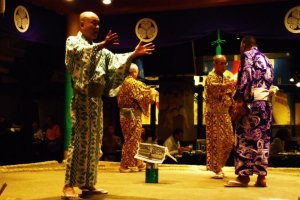