An event at Ginza's Whitestone Gallery

From October 8th until October 30th, Ginza's Whitestone Gallery will be hosting a solo exhibition of works from contemporary artist Kohei Kyomori. Born in Ehime Prefecture in 1985, Kyomori graduated from Milan's Marangoni Fashion Institute in 2008, and the foundation of knowledge he gained there has been a source of inspiration throughout his career.

Part of Kyomori's approach when it comes to his art involves researching the ornamental function of ceramics, architecture, and textiles, and then producing an artwork based on his findings — essentially turning 3D items into 2D. This exhibition will focus primarily on kacho fugetsu (images of nature), and many of the works on display will include motifs of flowers, birds, and butterflies. 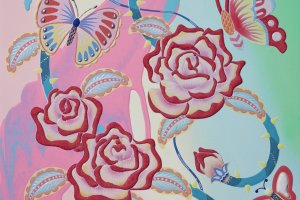