Looking for somewhere to have lunch in Shibuya one day, on the main street from the crossing to Tower Records I saw a sign advertising a vegetarian Indian buffet lunch for ¥1000. There's no more to the story, really: I like Indian food, especially if it's cheap, so it sounded good, and in I went.

The interior is very pleasant, with authentic-looking Indian carvings and pictures decorating the walls, and slightly gaudy chandeliers hanging from the ceiling, apparently also only as decoration. It's mostly tables for four or six, but if you're on your own and get in early, you can get a table overlooking what I call in my mind 'Son of Shibuya Crossing', the intersection in front of Marui, surprisingly quiet at a weekday lunchtime. (I mean, the crossing was quiet: the restaurant was packed by 12:15pm with a lively mix of students and shoppers.)

There's a time limit of ninety minutes, I imagine to deter people from lingering too long rather than overeating, though you'd have to be seriously committed to eat non-stop for that long: I was in and out in less than an hour. The buffet features four different curries, some staples, some of them daily options: the day I was there, they had a mild lentil and eggplant curry, a medium kidney bean curry, a medium soy meat and mushroom curry, and a hot Kashmir vegetable curry, this last one the only non-vegan one. (All the vegetables used in the curries are organic, grown on dedicated farms which are part of the company.) I enjoyed all the curries, but between my three forays to the buffet, I went for the medium two more than the others. As well as the curries, there's turmeric rice on the buffet, plain and organic nan bread, and a fairly basic salad and dessert.

The menu is comprehensive, all in both English and Japanese, with notes on each dish of allergens and vegan options: everything is vegetarian, many of the dishes are vegan or can be prepared vegan. As well as the buffet, there are lunch sets available: these are ¥980 for a single curry set, ¥1180 for a double, more if you include a spinach curry. (These prices are before consumption tax, 8% at the time of writing.)

There's a good range of curries as well as those above, and several different types of nan bread available: sesame, garlic, vegan, and kabuli, baked with nuts and raisins. For an extra ¥280 or ¥380 you can add a drink, such as a lassi (plain, mango or organic soy), or an organic juice, tea or coffee. If you go in the evening, then they have eight-course dinners starting at ¥2180 a head, or ten courses from ¥3480 a head.

So now I have another lunch option in Shibuya! (Also in their other locations, Ginza, Aoyama, Ogikubo, or out in Tateshina.) And if you're into cheap, tasty Indian food, particularly if you're vegetarian or vegan, this is a good place to try. 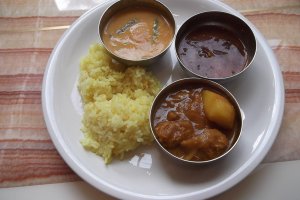 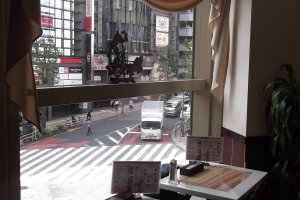 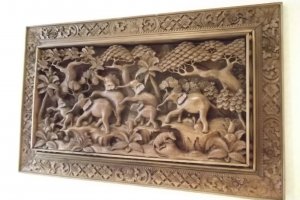 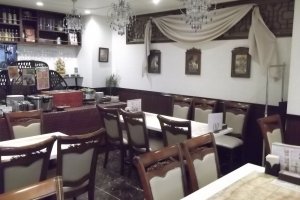 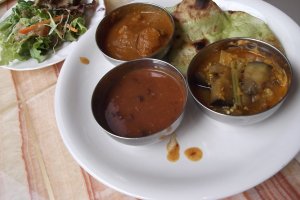 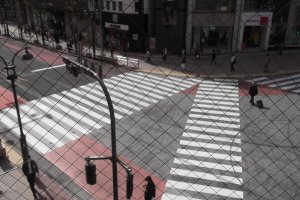