There's a bounce in the air when one steps into the Todoroki Valley, in Setagaya, Tokyo. Fifteen meters down, it is not a large or deep valley. But Nature might have done a Marie Kondo, for there's enough packed in for shinrinyoku, forest bathing or therapy. This is the relaxation, invigoration, even healing, that can come from proximity to nature.

Greenery bursts out everywhere, wild, disorderly, wonderful. Bamboo groves merge with temperate rain forest, with beech, zelkova, maple, cherry. Sound effects are natural, as in gushing water, the more than 30 bubbling springs, lightened up with the sounds of birds and cicadas. Sometimes, an uncluttered and untouched forest can make us feel at ease, reassured with what we are. I think this is also shinrinyoku.

Todoroki's natural state is actually Tokyo's vegetation before Tokyo's urbanisation. It is pretty much as it was when it was formally recognized in 1933. Also retained are precious historic sites, the Todoroki Fudoson Temple Shrine and Fudo-no-Taki Waterfall, as well as ancient tombs that date between the third to the fifth century. A very small shrine can be spotted on the grounds nearby, with the statue a likeness of Kobo Daishi, a revered Buddhist monk, as a child. You'll also spot an old, hand carved, stone basin, with Todoroki's award-winning spring water flowing through bamboo pipes.

The Todoroki Fudoson Temple and Fudo-no-Taki Falls share a joint sanctity through association with Kobo Daishi. Both have roots in ascetic and esoteric practices, some of which continue. The Fudo-no-Taki Waterfalls is a small waterfall with a Guardian God and two dragons purifying the water. It gives Todoroki its name, coming from the sound of a roaring waterfall, or todoroita. The Temple protects the Waterfall. They both augment the greenery with a reverential atmosphere.

The Todoroki Fudoson Temple started as a much visited pilgrimage site around 1100. It contains a graceful looking viewing deck constructed from slender planks of wood, and a main shrine. It still remains popular with worshippers seeking help in particular for transport and study. It was cute, if anything religious can be called cute, but the temple amulets have paw prints on them, said to be for pets.

If one walks to the Temple, it is up some steep and uneven steps, hewn from granite stone. This makes a stop at the traditional Tea House Setsugetsuka welcome. Sit outdoors and have tea and a sweetie next to a mountain wall of boulders and rocks, and inhale the invigorating freshness of the surrounding forests. There is also a mini-Japanese Garden wrapped around with slopes studded with different types of trees and bushes.

I didn't go near the ancient keyhole-shaped tombs known as yokoana. Nature is life, so it seemed contrary to hang around tombs, even though extinct and one can only hope no longer inhabited. Some of them can be crawled through. The biggest is over 100m long. They are mossy and smell dank. Children were jumping up and down on a large mound in the center of the play ground. This turned out of all things to be a historic grave.

Todoroki Valley is the only valley in all of Tokyo's 23 other wards. It came about as a river, the Yazawa, ate into the land, resulting in a ravine on both sides, and the valley in between. The two sides are joined by a striking red steel bridge built in 1961. It replaced the original wooden one built some time between 1926 and 1945. The red steel newbie is still known as Gorufo-bashi, or Golf Bridge, because it once led to one of the first golf clubs in Japan. It was built by the Tokyu Corporation, the Line that takes you today from Tokyo to Todoroki.

If you walk in, and this is highly recommended, you will start at Gorufo-bashi. The walk is only about a kilometre, a sneeze, but time will pass seeing the sites and enjoying the benefits of shinrinyoku.

I took the JR Keihin-Tohoku Line from Tokyo to Oimachi. Then changed to the above mentioned Tokyu Oimachi Line to Todoroki. 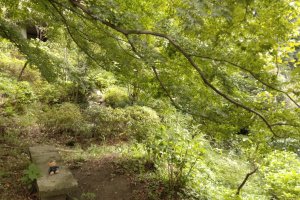 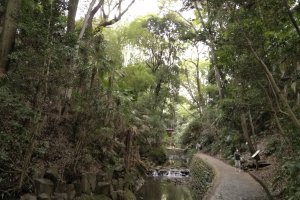 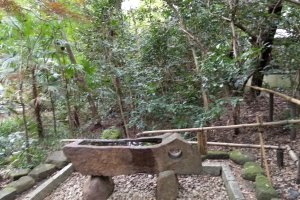 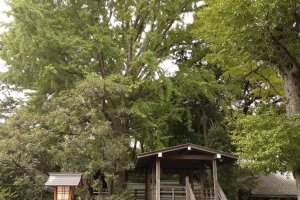 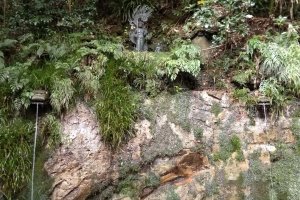 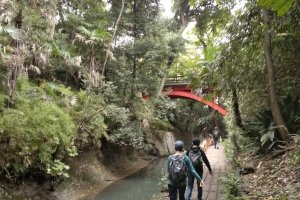 Cathy Cawood 4 weeks ago
I loved this place when I went there!
Reply Show all 1 replies

Arlene Bastion Author 4 weeks ago
Cathy, I'm so glad to hear from you. Cheers!
Reply
2 comments in total