The Birth of the One Eyed Monster Boy, Kitaro

Shigeru Mizuki, born Shigeru Mura, was a very famous manga artist, but many are not aware that he was also a historian who wrote about his experiences during World War II. From his childhood until his death November 30th 2015 he lived a life filled with mystery and purpose. Many of his famous ghost stories came from a local Sakaiminato women he nicknamed “Nonnonba”. She would sit with Mizuki for hours telling him folklore tales of Yokai, traditional Japanese monsters, ghouls, and goblins. He began drawing at a very young age and quickly developed self-taught skills in cartooning.

While stationed on the Pacific island New Britain part of Papua New Guinea he contracted Malaria and was not expected to live. To make matters worse he was injured during an Allied bombing and a dentist (the only doctor available) had to remove his left arm. He was left-handed and so it seemed his cartoon drawing would come to an end. To add insult to injury as the only survivor of his unit he was ordered to die. Not a promising start to his career. As a result of this experience, he stated in an interview that his ghost characters appeared only in times of peace and had no particular nationality or ethnicity.

After the war ended he wanted to stay on the island because of developing close relationships with the village people. His dentist doctor advised against it, as he would need additional corrective surgery or die young. He came back to Tokyo had several surgeries, attended art school, and learned to draw with his right hand. He continued his relationship with the villagers for over fifty years and in turn they bestowed an honor by naming a street after him in Papua New Guinea.

From the end of the war through 1956 Mizuki worked as a movie theater operator and published his first comic book Rocketman in 1957. From that beginning he went on to publish 760 books with over 17,000 pages of illustrations. Many of his Kitaro series characters represented not only the folklore Yokai, but also his personal life experiences. A true believer in the supernatural, Mizuki traveled to over 60 countries researching local ghost tales.

Kitaro is a one eyed boy monster that runs around assisting people with supernatural problems. His father Medama Oyaji, a small eyeball accompanies him on many of his adventures. The Manga industry owes much of its success to Shigeru Mizuki.

He has won multiple awards including the Eisner Award for Best U.S. Edition of International Material – Asia for “Onward Towards Our Noble Deaths,“ a manga book about his war time experience. In May 2016 the first seven Kitaro books titled “Shigeru Mizuki’s The Birth Of Kitaro” were published in English with more to come. I purchased the book and even for an adult is was very entertaining. The Kitaro series was also turned into movies, TV shows - and our public broadcaster NHK produced a TV drama about Mizuki’s married life.

When visiting Japan you can learn more about this very interesting man, meet Kitaro and his many monster friends on Mizuki Shigeru Road in Sakaiminato, Tottori Prefecture. Along the street there are over 100 bronze ghost statues, Mizuki Shigeru museum, and shops selling every type of ghost souvenir, including Kitaro Sake.

After learning about the life of Shigeri Mizuki and reading my first Kitaro book I want to go back to Sakaiminato to see all that I missed the first time. There is an excellent information center at Sakaiminato Station. 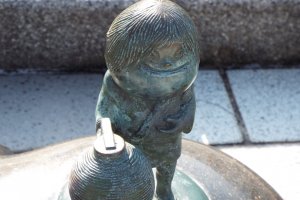 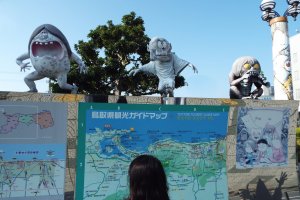 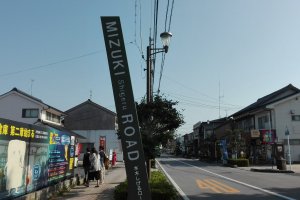 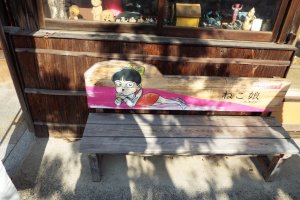 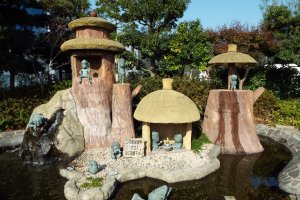 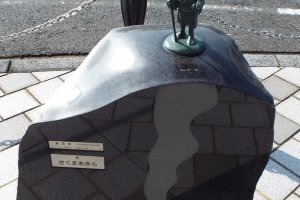