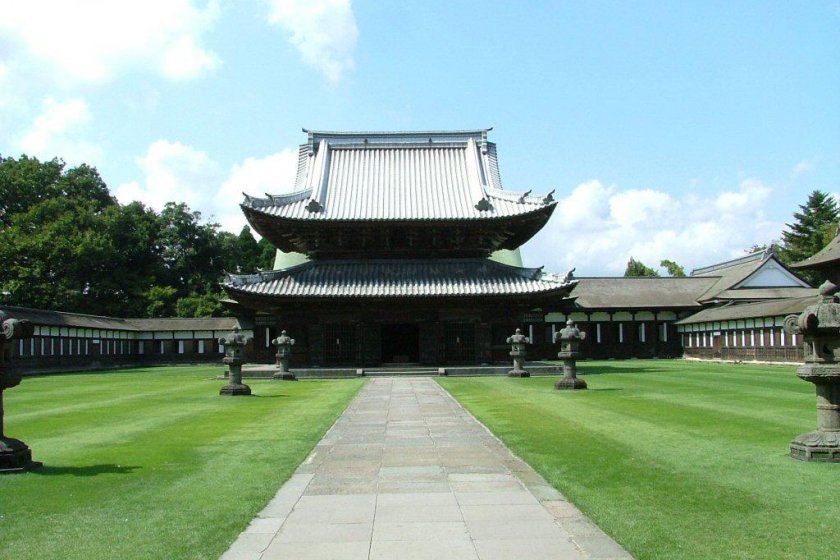 Ten minutes walk south of Takaoka station in Toyama Prefecture, tucked unassumingly away off a side road, sits Zuiryu Temple, one of the largest and most important temples of the Soto sect of Zen Buddhism. It sits at the western end of the Maeda Toshinaga Path, which commemorates the founder of both Zuiryu Temple and the town of Takaoka itself. Maeda Toshinaga was the second lord of the Kaga Domain (present day Ishikawa) and founded Takaoka in 1609 as a counterweight to the growing might of Toyama in the east and Kanazawa in the west. Takaoka began as a castle town, but in an attempt to diversify from a purely military base he ordered the construction of Zuiryu Temple in 1614.

The entrance to the temple is very impressive; a two-story entrance gate towers over the small ticket office (entrance fee 500 yen, about $5), and the two huge gold lotus emblems on the imposing wooden doors have reminded visitors for centuries that this was very much Maeda Toshinaga’s project; his family crest was the five leaf lotus.

The first space inside the temple proper is an expanse of white gravel either side of the central pathway. Zuiryu temple is said to be designed in the shape of a body, and the outer wings of this first courtyard represent legs; this is where the less important secular functions of the temple such as washing and bathing happen. The sanmon (main gate) stands sentry over the heart of the temple and allows a glimpse of the central precincts; a wooden block in the stone floor marks the best spot to stand in order to see the central butsuden (Buddha Hall), framed perfectly by the gateway of the sanmon.

The Butsuden itself is spectacular; set in the centre of the temple complex and surrounded by cloisters, and you might think that the raised stone platform that it sits on is to give it a further air of grandeur and status. In fact, the truth is somewhat more prosaic; the Butsuden has a very rare lead-tiled roof, which makes it so heavy an especially strong foundation was needed to support it.

Inside, take note of the two massive pillars supporting the roof; each is said to come from a zelkova tree more than 600 years old.

Behind the Butsuden is the Hatto (ceremony hall), where services and rituals are performed, and you can take green tea and a sweet for 500 yen (around $5). The painted ceiling by famed 17th century artist Kano Tanyu is worth straining your neck to gaze at, as are the wooden light fittings; if they look ancient, that’s because they haven’t been replaced since the late 19th century.

An inconspicuous door in a corridor off the Hatto leads to an equally inconspicuous garden, where the temple’s founder Maeda Toshinaga is interred. A simple grave suffices for him and his wife; perhaps he believed the temple itself was monument enough. 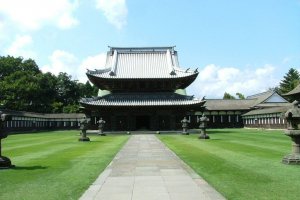 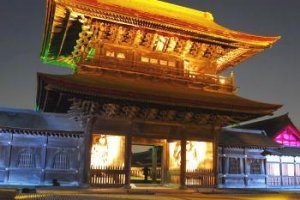 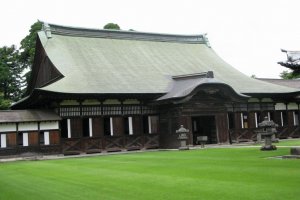