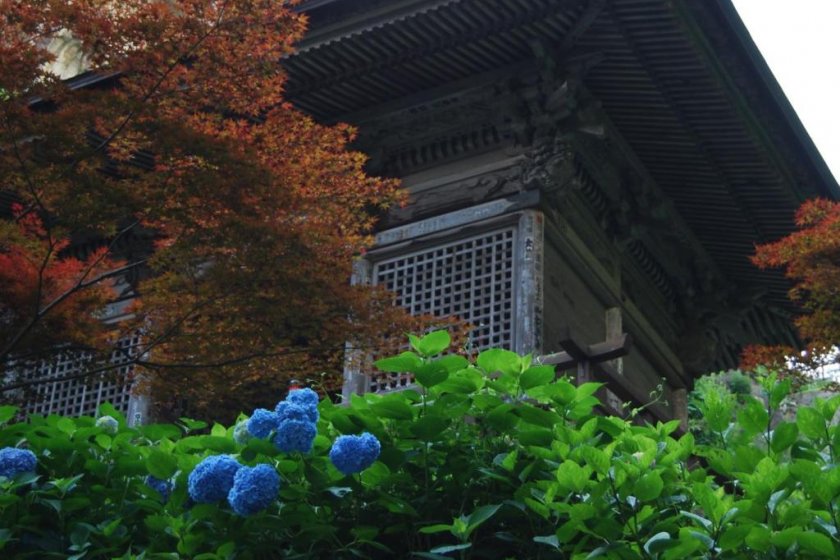 Yamadera: The Temple in the Mountain

When Japan’s most famous poet, Matsuo Basho, was bitten by the travel bug, his Wanderlust took him north and deep into the Tohoku region in Yamagata Prefecture.

During his 5-month arduous journey he also ventured through the Province of Yamagata, where he penned some of his best-known haiku (a form of Japanese poetry).

As the name Yamagata (“mountain-shape”) hints, two-third of the region is covered by mountains. No wonder then that one of Yamagata’s most famous landmarks, Risshaku-ji Temple, is nestled to a rocky hill. It is commonly called Yamadera (“mountain temple”) and it was originally just caves carved into the volcanic rock of the mountain and used for praying and ascetic practice.

Later buildings were added and now there are 40 temple structures dotted all over the hillside. The temples and pavilions on the slopes of the hill make for a picturesque landscape and the views are particularly enchanting in autumn when leaves change color.

Yamadera was established in 860 by Ennin, a monk of the Tendai sect of Buddhism, which is headquartered at Kyoto’s Enryaku-ji Temple. On foot of the hill at Yamadera there is the Komponcho-do, the temple’s main hall.

This 14th century building shelters the “eternal light of Buddhism”, a flame that Ennin brought the whole way from Kyoto. It is said to have been burning ever since and it is up to you to figure out which of the temple’s seemingly unremarkable lanterns carries the holy freight.

Walking along the foot of the hill, one passes a statue of Basho who sits in travel gear on a rock and seems to ponder over his next literary effusion. Basho’s 2,400km journey is detailed in his travelogue “The Narrow Road to the Deep North and Other Travel Sketches”.

If you want to know more about this traveler-cum-poet, then check out the Yamadera Basho Memorial Centre. Basho, the Edo-period haiku poet (1644-1694), and Ennin, the Heian-period Zen monk (794-864) who is said to have written more than 100 books himself, would have found enough topics for an interesting chat had they actually met at Yamadera.

Once visitors have passed the San-mon Gate, an exhausting climb up the hill starts and it only ends a 1,100 or so stone steps later at the Nio-mon Gate, the entrance to the temple complex on the summit.

On the way up one can catch a glimpse of the Nio-mon through age-old cedar and oak trees lining the path. It is winding its way up the hill past forlorn-looking stone lanterns, moss-covered rock carvings and countless weather-beaten Jizu statues dutifully watching over the huffing and buffing tourists and devotees as they make their way up the steep staircase.

In front of Okuno-in, the temple on the summit, there is a huge stone lantern, which is said to be one of the three biggest stone lanterns in Japan.

A nearby path leads to the Kaisan-do where Ennin is enshrined. From there one can see the Nokyo-do, a small, red-lacquered pavilion sitting atop a cliff, making for a nice photo shot throughout all seasons.

Godai-do, a terrace precariously perched on the side of a cliff, marks the end of the path.

The views over the surrounding area and the mountain scenery are stunning; well-worth the strenuous climb and the 3-hour Shinkansen journey from Tokyo.

Find out more about Yamadera Temple. 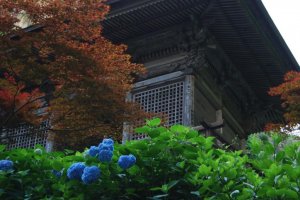 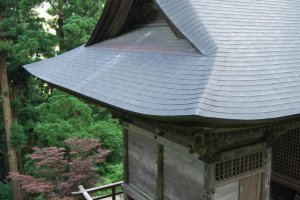 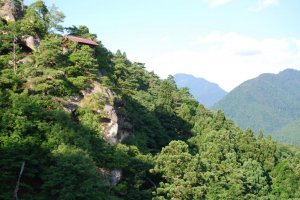 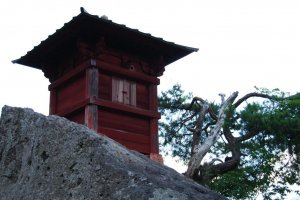 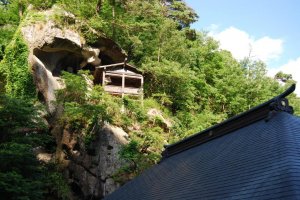 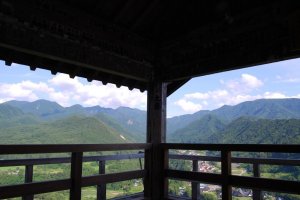