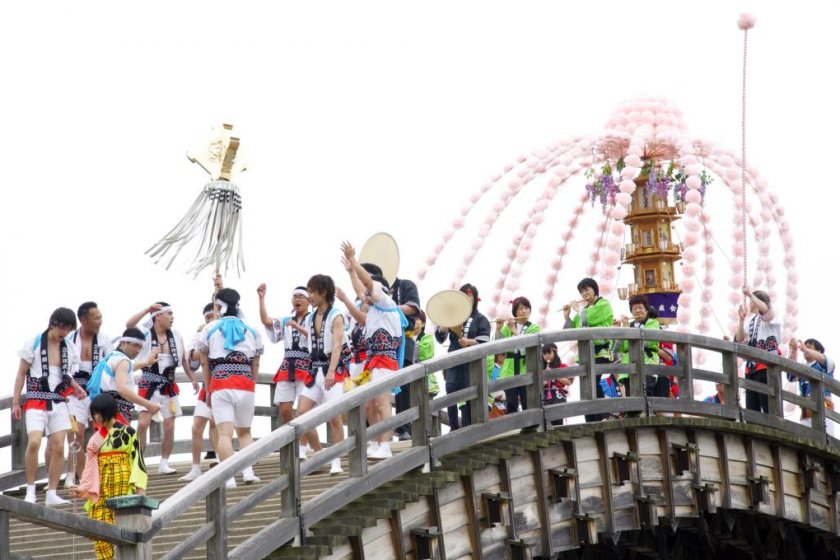 Every year on April 29 (a National Holiday commemorating the birthday of the Showa Emperor, Hirohito) the Kintai-kyo Bridge Festival is held in Iwakuni. Centered around the iconic and beautiful five-span arched Kintai Bridge, the event attracts large numbers of people and is a fun day out.

The highlight of the event is a reenactment of the departure of the local daimyo, or lord, and his entourage for of Edo, a requirement of the sankin-kotai system imposed by the Tokugawa Shogunate. The parade of men and women dressed in colorful period costume usually cross the bridge at around 2pm.

The parades are followed by a demonstration of the firing of antique matchlock guns by local volunteers dressed in Edo Era armor and Japanese taiko drumming. You’ll find other demonstrations and performances, as well as all the usual food and drink stalls common at Japanese festivals.

More about the parade

One of the Tokugawa Shogunate’s more ingenious means of controlling its powerful vassals was the institution of sankin koutai which required local lords (daimyo) to spend every alternate year in the capital, Edo. Over time a culture of one upsmanship developed as daimyo would, a great financial cost, vie to outdo each other in the magnificence of their progresses. The parade is a reenactment of the return of the local daimyo with his entourage from the capital.

Over a two and a half hour period, starting just after 1pm, various groups make their way over the five arches of the bridge, some performing elaborate and dexterous moves. The procession culminates with the daimyo, the highest-ranking vassals and women dressed in beautifully colored kimono. Look closely and you’ll notice that some of these participants look a bit different from the rest of the paraders; they are from the local US marine base which is located in Iwakuni. The whole thing is slow-moving, but, as the bridge is closed to the public during the procession, it is a great sight evocative of woodblock prints of the time. While the parade is in progress, a troupe of volunteers dressed in samurai armor give a demonstration of 17th Century gunplay on the riverside using antique weapons.

As the bridge is closed to the public during the parade, it makes sense to choose your viewing point well before it starts. The parade reenacts the return of the daimyo, so comes over the bridge towards the park that lies below Iwakuni Castle. The firearms display, however, is on the other side of the river, near where festival-goers park their cars.

As well all the usual festival stalls selling tasty stuff to eat, including places to buy Iwakuni’s own version of pressed “box sushi” (which predates the Tokyo-style nigiri-zushi that predominates today) and Iwakuni lotus root (renkon), you can drink Japanese tea served by ladies in kimono in a pleasant tea garden, and wander around one of the largest flea markets in the region which spreads along the bank of the river.

If you are lucky, some of the cherry blossoms may still be around, but even if they are not, in good weather this festival makes for an excellent day out.

We snagged a space on the riverbank just to the side of the castle-side end of the bridge: this allowed us to see the parade as it went over the high arches, and the kids could paddle in the river below. We also had easy access to food and drink stalls, as well as to a toilet. We didn’t get a great view of the firearms display on the other side of the river, but could “kind of” see it - we definitely heard it! 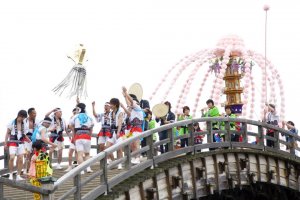 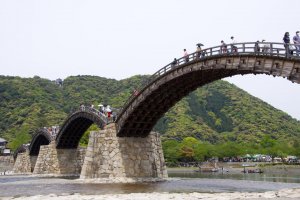 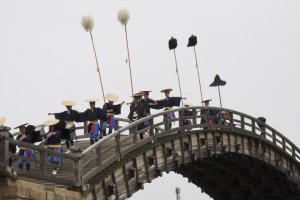 Elena Daurtseva 3 months ago
Is this a reenactment of the departure or return of the local daimyo? I didn't quite understand
Reply Show all 0 replies

Kim 2 years ago
The parade makes the photogenic bridge even more glorious to capture, it seems!
Reply Show all 0 replies
3 comments in total