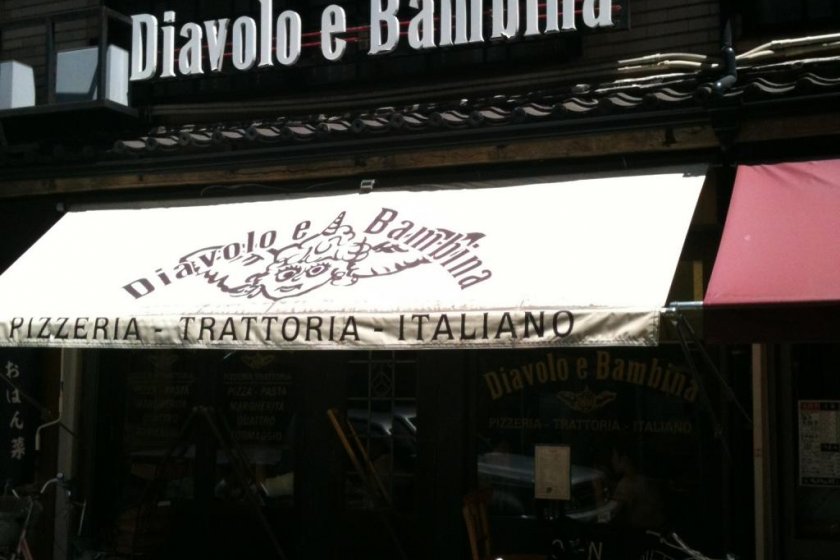 Most people traveling through Nagoya will eat in JR Nagoya Towers with its plethora of restaurants from Italian to deli to Asian cuisines but usually if you arrive anytime after 11:00, you will have to wait in a line to get in. We had three kids in tow, so waiting was not on our list, yet we wanted to give our kids a good restaurant experience without bending to convenience of McDonalds or other fast food chain. The result, a discovery on my wife’s part, was Diavolo e Bambina, which my mother tells me means “The devil and the baby girl” in Italian.

Much of downtown Nagoya is concrete and steel but walk two minutes from the station and you will be in an area dotted with pre-war minka-style buildings featuring a variety of restaurants and boutiques. Located in the middle of one row of these buildings was the well labeled “Diavolo e Bambina. It had only one door and through the window looked fairly crowded with salary men and women. I entered first and asked if they could see a family with two children and a baby. They said sure. We entered. Two very helpful staff escorted up a very very narrow stairs which lacked a hand rail. One was a young woman who led the way, the other was the manager who carried our stroller.

The frame is 100% wood covered with plaster which was in turn covered with the signatures of the famous and non-famous and messages from past patrons wishing happy birthday to a friend, and celebrating an anniversary. There was even a message from Star Alliance promoting their business. Anyone is welcome to leave a message on the wall if desired.

The second floor was still fairly deserted. We were seated at a round corner table so that we could put our baby in the stroller without interfering with traffic or other customers. Lunches are in set menus including soup, salad, pasta and fire baked pizza or two. The soup was a basic minestrone with vegetables and sausages. We chose a cream based pasta, a simple margherita pizza and instead of a second pizza we chose a calzone. Like many Japanese lunch sets, we had a choice of drinks for after the meal. Our children were given drinks for free and we only had to pay for one of their meals. This was not printed on the menu but the manager made it so. Maybe they don’t receive many families so printing it is not needed; none the less, it was a nice addition.

The soup and salad were nice starters and only helped when the pasta arrived. My kids sucked it up and just before they finished, the pizza arrived hot and still bubbling hot from coming out of the oven. We let it cool and dove in. It was at this time that my son, completely overwhelmed the the mornings hike around the city, started to fall asleep at the table. The amazing thing was that even though he was falling asleep he still chewed his food and opened his mouth for more. It was that good.

The last dish was the calzone. Upon arriving, my daughter examined it, looked at me and said, “daddy, what’s this?” I told her it was a calzone, basically a pizza that has been folded in half. I cut it into four parts and gave a nice center section to my daughter who didn’t quite appreciate it. In the end my wife and I split the calzone and gave the remaining pizza to the kids. It all got finished off with coffee for me and juice for everyone else.

The restaurant was finally packed with people both up and down stairs. We gathered our things and again the staff helped carry our stroller down while another helped guide our children. One lady even sat on the stairs with our son, who had woken up, and slid down the stairs step by step on their bottoms.

I don’t understand why the restaurant is called Diavolo e Bambina but after the great service, atmosphere and delicious food at the wonderful price of ¥4000 for a family of five, I would call it Angelo e Premio Personale (angels and the premium staff). 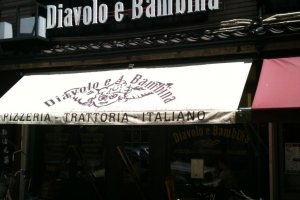 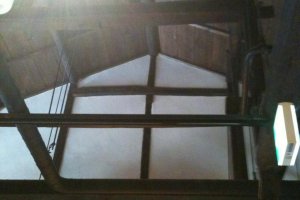 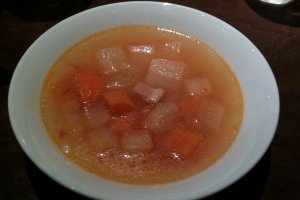 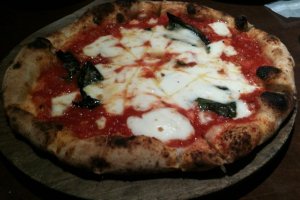 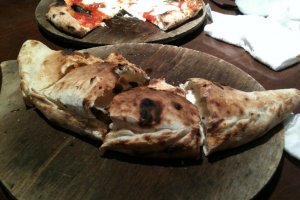 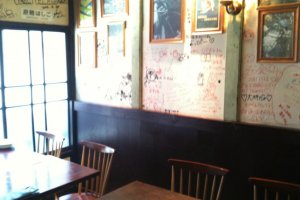