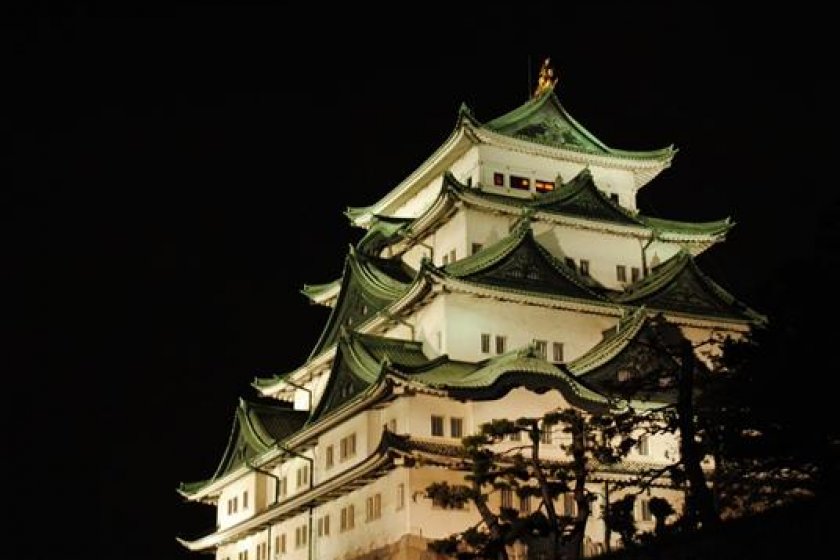 Party at the castle

Summer in Japan can be as hard on the locals as it is on travelers. The heat and humidity bear down during the day, making being outside unpleasant. In recognition of that, the Nagoya Castle Festival doesn’t start until 5, when the sun is well on its way down for the day.

The festival runs for from the first Friday in August and goes for thirteen evenings. Admission is 500yen for adults and free for children. You’re given a schedule and an uchiwa - a flat Japanese fan – on your way in.

The entertainment on stage and guests vary from night to night, and a more popular entertainer might draw a larger attendance at the festival.

There are festival games running down the main stretch of the path toward the castle. The highlight of the games, in my opinion, was that there were options like archery and shuriken (ninja star) throwing. Those aren’t exactly standard festival sightings in Japan.

By far and away outweighing the number of games is the number of food stands. A few are the typical small, colorful stands common around local festivals, but most of them were massive semi-permanent stands erected to last the two weeks of the festival.

At the end of the main street, down past the bridge for the entrance to the castle, there is a stage set up with lanterns. This is the typical set-up for Obon Odori, the traditional dancing that goes with the Obon holiday in Japan. People in colorful, matching yukata dance in circles around the stage with dance leaders and musicians on top. Anyone can join in, and festival-goers in normal clothes are often interspersed.

Festival food is a bit pricey, but generally worth it. The Satsuma-imo (sweet potato) sticks are very starchy and a lot to eat, so they’re good for sharing. My friends and I got our snacks and beer and settled at some tables provided near a food area so we could watch the dancing. Some overly-friendly locals decided to top off our cups several times and engaged us in friendly, curious conversation. It was a good time.

Other things to see at the festival are the castle lit up at night and the live performances of the non-musical variety. The main path to the castle is closed, but there are several places from which you get a fantastic view of the castle lit up at night. Entertainment performances we saw included someone making balloon shapes, a comedic performer whose partner was a macaque (a Japanese monkey), and a performer who balanced, juggled, and solved a Rubik’s Cube behind his back.

The festival is only open from 6pm to 9pm (guests have to be out by 9:30), but it’s a great way to experience a Japanese festival in a convenient location where the subway pops you out right in front of the venue. Eat the festival food unlike anything you get at home, enjoy the entertainment, and know when you’ve had enough to drink. Have fun! 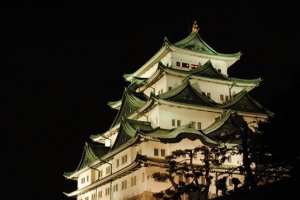 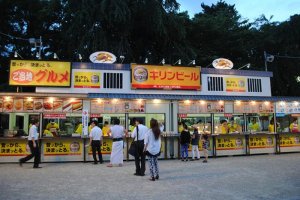 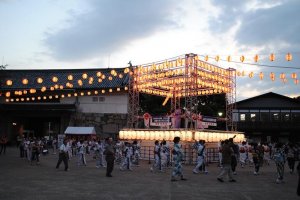