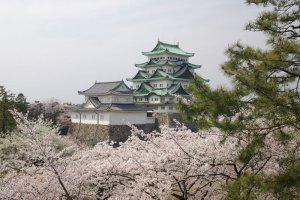 Nagoya Castle is located in Aichi Prefecture and was built by Tokugawa Ieyasu.

The Hommaru Palace, completed in 1615, served as the official residence and administrative seat of the Owari-Tokugawa clan. Together with the tower walls, the Hommaru Palace was one of the first palace buildings to be declared a national treasure in 1930. In 1945, however, it was destroyed in the air raids of the war. Using existing architectural plans from the Edo period (1603-1868) and other historical resources, the palace was authentically rebuilt in 2018 and thus regained its former glory.

The adjacent Ni-no-maru garden, which was used both privately and officially by the successive lords of Nagoya Castle, was once Japan's largest garden that bordered the living quarters of a prince.

The Beauty of Nagoya Castle

Viewing the beautiful landscape and well preserved architecture of the Nagoya Castle.

Nagoya Castle attracts many visitors for hanami (cherry blossom viewing). I find it wonderful when culture and nature blend into..

Until WW2, Nagoya Castle was the biggest, best designed, most gorgeous and well preserved of all the castles in Japan, and had been..

Reconstruction of the Hommaru Goten, the lavish palace below Nagoya Castle. Stage one is set to open on May 29, 2013.

Tracing down every corner of the newest face of Japan's most extravagant palace, where imperial palace members resided in Nagoya...

Hommaru Palace Comes Back to Life

Nagoya's Hommaru Palace is finally completed after the restoration work. This was the accommodation hall of the Tokugawa family..

The Nagoya Marriott Associa Hotel offers panoramic views of the City and Nagoya Castle to the east, and the train station to the..

HOTEL MYSTAYS Nagoya-Sakae is a hotel among busy streets, so you are never far away from the buzz of Nagoya.

Any fans of Godzilla should immediately recognize the Nagoya TV Tower. The famous reptile destroyed the tower in the 1964 movie Mothra vs. Godzilla and..

Oasis 21, located above Shin-Sakae Station in Nagoya, is a place for shopping and eating. Opened in 2002, this modern facility is across from Nagoya TV..