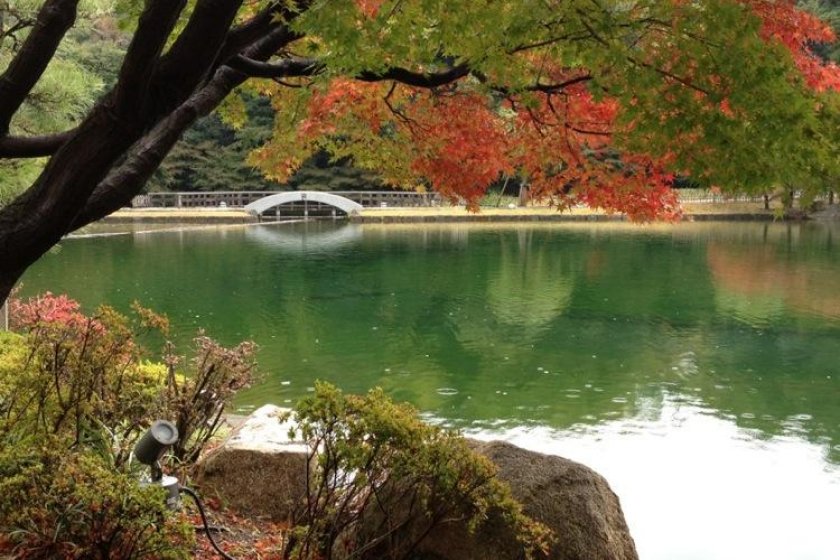 Tranquil Tokugawa-En in the heart of Nagoya

Just three kilometers away from Nagoya’ famous Castle is the former residence of the Lords of Nagoya, the Tokugawa family. Originally constructed in 1695 as the retirement home for the Second Lord of Nagoya Castle, Tokugawa Mitsutomo, the grounds once covered some 44 hectares and was said to have been the greatest garden of its day. Unfortunately the extensive gardens and elegant living quarters were all but destroyed in the massive air raids of World War Two. Now in their place are the Tokugawa Art Museum, and along side of that, the recently renovated magnificent Tokugawa-En Gardens. Restored to their former glory in 2004, the Tokugawa-En is a year round attractive date spot, tourist draw and place of relaxation for the residents of the city.

Entry is via the original residences’ Kuro-Mon, the Black Gate, which escaped destruction by wartime firebombs. A two storied restaurant, auditorium and store, the Kansero, overlooking the massive central lake provides visitors with a spot to relax, enjoy a meal and get some of the best views of the landscape.

Huge colorful carp swim the wide Ryusen Lake, a central focal point of the extensive gardens, and like many Japanese gardens, is supposed to represent the ocean. Surrounding this lake, fed by underground sources, are huge stone monoliths, black pine and maple trees, lush green forests, seasonal plants, stone lanterns and a number of bridges connecting the many walkways.

Of note is the Ryumon No Taki Waterfall, located just below the Kuro-Mon entrance. A special mechanism was created causing the waterfall to suddenly surge and cover the stepping stones once one had completely crossed the small stream. The feudal lords invited to the garden parties of old found this feat of engineering both surprising and enjoyable. The Ryumon No Taki waterfall was actually brought from the former Owari Tokugawa residence in Edo, now the grounds of Waseda University in Tokyo in 1998, and has been faithfully restored.

Another beautiful waterfall can be found within the evergreen forest. Ozone No Taki is a six meter high, three tiered waterfall which has given its name to the local area, Ozone. Here and there amongst the many different trees including plum and peach, maple, oaks and cherry are places to rest and enjoy the peace and tranquility of the Zen gardens. The Tea Ceremony can also be enjoyed for a separate fee in the elegant Zuiryutei Teahouse overlooking the central lake and the Chinese influenced levee behind it.

Closed on Mondays, admission to the garden is just 300 Yen, and can be purchased along with entry tickets to the adjoining Tokugawa Art Museum. Bring your camera, particularly in the spring and autumn and enjoy a bit of refreshing greenery at Nagoya’s Tokugawa-En. 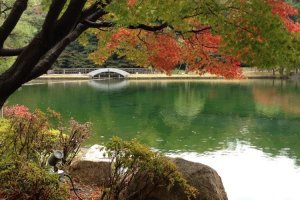 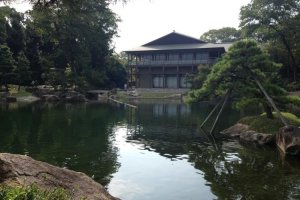 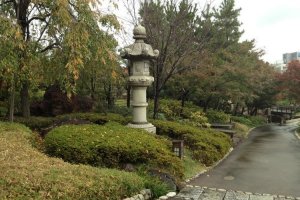 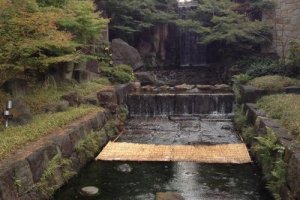 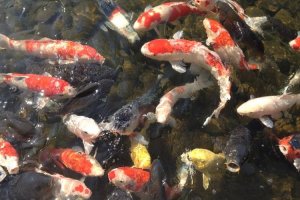 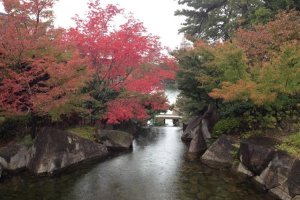