Toyohashi’s annual Gion Festival, staged every July since the mid-1500’s at Yoshida Shrine, Toyohashi Park, just behind the remains of Yoshida Castle overlooking the Toyokawa River, is one of the more exciting and eye-catching, and traditional of the Japanese summer fireworks festivals. In fact, early fireworks festivals consisted of these handheld tube fireworks, long before the ability to launch explosives was discovered.

The night is capped off by a more modern fireworks exhibition, with the magnificent colors and going off almost right above the spectators gathered in the riverside grounds. The Grand Finale consists of a number of huge Tezutsu Hanabi mounted on portable shrine-like frames, which are carried by local teams and set off one after the other in the main arena. Tickets for the better seats within the sports ground setting range from 500 yen for the “B” seats (ie, right at the very back) to 3,500 yen for the “SS Special” box seats. See a real Fireworks demonstration, the traditional way, in Toyohashi next July!

These handheld fireworks, called Tezutsu Hanabi, are believed to have originated as a form of the battlefield and inter-castle communication smoke devices called “Noroshi”. As gunpowder was introduced and production perfected, the now rare hand-held fireworks became a popular summer festival attraction.

The Tezutsu hand-held fireworks cannon are simple hollowed-out bamboo cylinders about 80cm long and ten to 15cm wide, and wrapped tightly in ropes of woven rice stalks. Each of the participants are responsible for hand-making their own launcher and packing it with about three kilograms of old-styled black powder. Dressed in traditional clothing, including special thickly woven fireproof cotton quilted jackets reported to cost in excess of 150,000 yen (about $1,500) each, the men line up in the darkness and assisted by the match-man carrying a small flame, carry the hot flaming bamboo cannon aloft during its short, volcanic-like explosive life.

Despite being surrounded by thousands of people, there was an eerie silence in the blackness behind the Yoshida Shrine. The voices of a few men shouting in the near distance could be heard, but not understood. The inky darkness was then pierced by a few small but bright, flame-red lights…igniter lights.

Slowly, clouds of smoke billowed from large tubes held in the arms of the men whose voices had drifted across the small plain. A row of eight or nine great dazzling shafts of fire were suddenly thrust five to eight meters up into the darkness, the hissing sparks raining down for 30 to 40 seconds before a great explosion and a final shower of bright orange sparks extinguished the fiery spectacle. Again all was momentarily quiet, and once again dark, before the crowd erupted in a thunder roll of applause and animated voices, and a great cloud of thick white smoke rolled across the arena.

Within ten minutes, the scene would be repeated again, and again with other men ready to accept the challenge of holding the dangerous flaming cartridges and risking burns and injury when the black powder exhausts itself with a deafening boom! 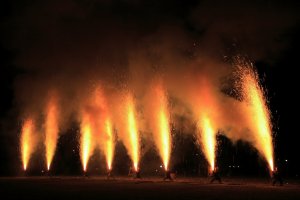 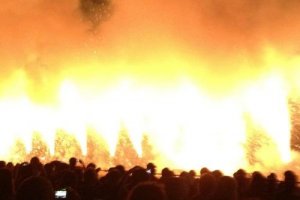 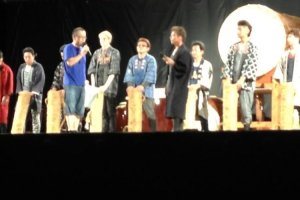 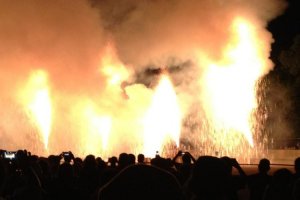 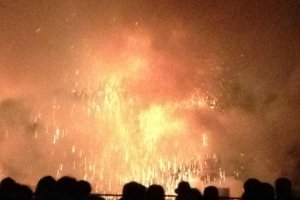 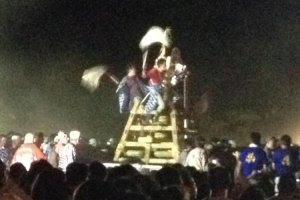 Kim 2 years ago
The danger potential is high!!
Reply

Kim 2 years ago
Hand held fireworks - now that's something I haven't seen before!
Reply Show all 0 replies
4 comments in total