The Giant Tug of War of Kariwano

Each winter in Daisen, people gather for a tug of war

Every year the people of Kariwano district in Daisen City, Akita Prefecture, get together on February 10th for a giant tug of war known as "tsunahiki". They use two rice straw ropes weighing around 10 tons each. The result of this battle is said to determine the rice harvest in the coming year. The town is split in the middle to decide the two teams.

Many towns and cities around Japan have summer festivals. In Akita Prefecture, due to the abundance of snow, several towns have winter festivals instead. February 10th is the traditional new year in Japan, based on the formerly used lunar calendar. Several festivals are held around that time, so if you're planning a trip to Akita in winter it’s a good time to catch several festivals. This year, I took part in 6 festivals in just 2 days. Some planning is required to catch as much of the action as possible. Since it’s winter, the roads are slippery and obviously jampacked with traffic around the festival sites.

As with most towns in Japan, the rice harvest is an integral part of the well being of the region. The Kariwano festival dates back to around 500 years earlier, when the town was mostly dependent on its agriculture industry. As such, each neighbourhood had a stake in the success of the festival and the harvest. The town is divided into one red and one yellow team. Tradition says that if the red team wins there will be an abundant rice harvest and if the yellow team wins, the price of rice will be high. It’s a basic rule of supply and demand at work. I was told that for the last 3 years the yellow team won. Anyone can participate in the event—just pick a team.

The making of the giant straw ropes starts around one month before the festival and is completed about one week before the event. On the day of the festival, the ropes are taken to the shrine to get blessings from the Shinto priest. They are then brought to the main street in the center of town in preparation for the festival. The festivities start in earnest around 5pm, when the firefighters gather and consume a good amount of sake. Not long after that, a team of taiko drummers start hitting the drums giving the atmosphere a very lively and exciting feeling. The event is also broadcast live on local radio with a play-by-play commentator.

A little later, they have to tie the two ropes together—one of them has a loop on the end, while the other one is straight and will be pulled through the loop. Then, a big overhand knot is made so that the more people pull, the tighter it gets. It's pretty impressive to see it in action because the rope has to be pulled through the loop for about 10 meters to get a good knot. It normally takes around 20-30 minutes to tie the knot, but this year for some reason it took almost an hour. Normally the pulling would start at 9pm sharp, but this year it started around 9:30pm. They pull until one of the rope ends reaches the center point.

This year, it looks like the yellow team didn't wait for the signal. They started a bit early, taking the red team by surprise. The pulling was one-sided from the beginning—the red team never had a chance. The yellow team had another advantage: dry pavement. The red team stood on snowy pavement, making it less stable. I'm not sure if they change sides every year or not to make the contest fairer.

Daisen is located in the center of Akita prefecture at the junction of routes 13, 46 and 105. It is relatively easy to get there, but as the festival is in winter, allow extra time to get there. The town is also on the Akita Shinkansen route and Ou Main line. 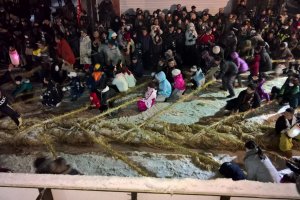 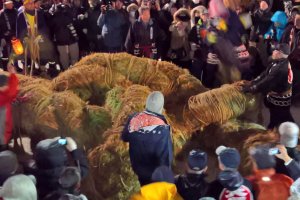 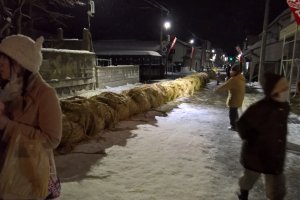 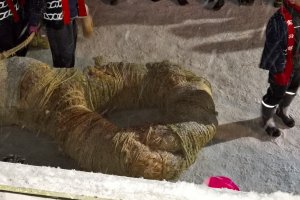 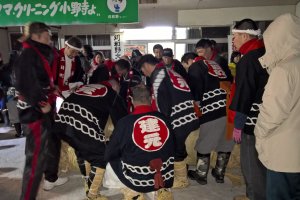 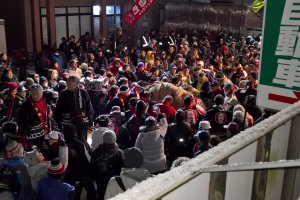 Bonson Lam 5 years ago
The tug of war events are huge in Japan. In Okinawa they have one in the summer, like you said.
Reply Show all 0 replies
1 comment in total