Honor or wealth? The dilemma of General Satake

If you could go back in time and change your life, what would you change? What would you choose? Peace and prosperity? Or honor in battle, even if it meant losing your life? 400 years ago, this was Daimyo Satake’s dilemma, in the Battle of Sekigahara.

Among samurai fans it is without question that the Battle of Sekigahara (in modern Gifu) was one of the most important wars in Japanese history. On that fateful day of October 21, 1600 the two sides met and a bloody battle ensued, with thousands of deaths and even more injuries. This battle was the turning point for him to establish his shogunate, and defined Tokugawa’s reign for 300 years.

Now there is a little castle at Senshu park called Kubota castle. Satake was on the side of Ishida Mitsunari who lost the war. When you visit here, it makes you wonder how he lived after war. Mind you, Satake was no pauper. Akita at that time was a land of agricultural bounty, a tradition that continues today. In the 1600s, the government used to rate states depending on their rice production, and Akita was one of the higher rice producing areas.

So Sakate had extraordinary wealth, but at the same time, he had to live with the shame of being on the losing side. ‘Shame’ is one of the key words that define Japanese societal and moral values. There isn’t enough space here to describe the depth and complexity of this idea, but as you study the history and culture of Japan you will come to see and know it and what that means to the Japanese people. Retracing his steps in the castle, it was hard to put aside such thoughts even though there were no signs around suggesting what Sakate would have thought about this (maybe it was too shameful to show in the signs!)

From the top floor of the castle, you can see the Akita downtown and central business district, all the way out to the Oga peninsula and the ocean beyond, and it makes you wonder how Satake was feeling when he could see his fiefdom above the local townsfolk. He had everything in his hands but he had to spend the rest of his life as a loser.

Nevertheless he left a long and fruitful legacy. Kubota castle town became the city of Akita, and is now one of the most important cities in the Tohoku (Northern Japan) region. We have just recently celebrated the four hundredth anniversary of the castle.

This castle costs is just a five minute walk from Akita station and is highly recommended for fans of samurai history. 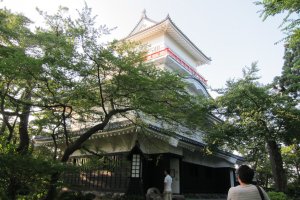 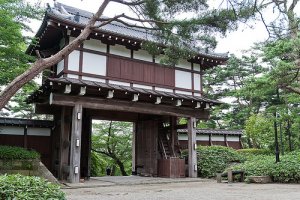 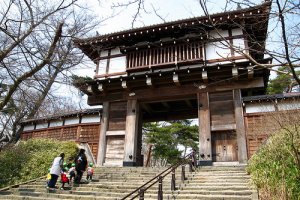