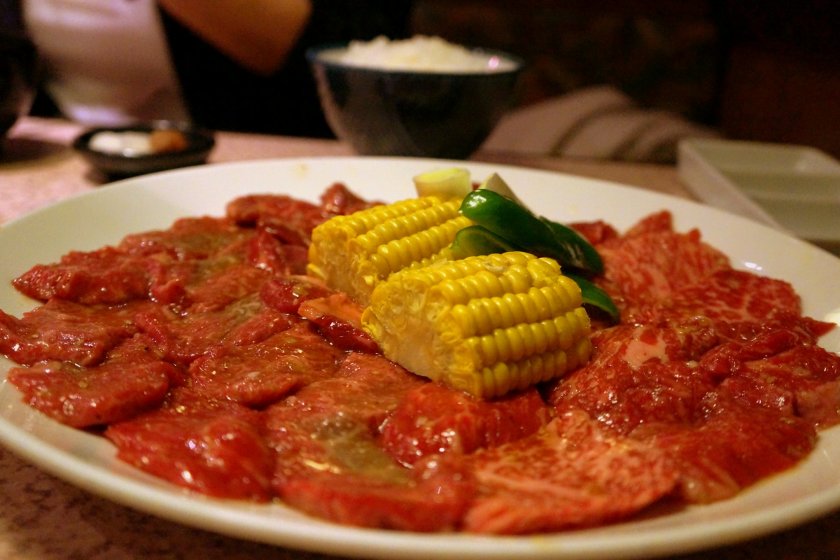 Hey, you have to eat!

A nice plate of marbled beef at a good yakiniku restaurant where you grill your own meat.

If you're a traveler coming to Japan I'm sure eating some great Japanese food is high on everyone's agenda.  By the very virtue of you traveling to Japan it says that you are somewhat adventurous. So you'll be walking around different cities and popping your head into many restaurants. At least you should be in my opinion. There is no reason to play it safe and find the nearest McDonalds. You will undoubtedly find restaurants where the menu is in Kanji or Japanese only and the owners will not speak your language. I admit that would be a difficult but not insurmountable problem. You could turn around and walk out or you could see what everyone else is eating and point to their dishes. Or maybe the menu has pictures. Or you could point to the plastic food plates outside the restaurant for your order.  Some of the best meals and adventures are found by just walking in and see what happens. Sometimes you strike out, but more often than not, you'll end up having a great experience.

Most people coming to Japan make an effort to learn some Japanese basics. The study list incudes a little bit of the spoken and written language and perhaps some Japanese customs.  A huge task that most don't deal with though is learning those Chinese looking characters called Kanji. With the right approach you can learn many kanji in a reasonable amount of time. But for most, you just want to get by, and perhaps learn some of the most common or most important kanji that you might encounter.

From a food perspective, I may be able to shed some light on the kanji problem. You want to know if the menu says raw or cooked. You'd like to know if you're ordering chicken, beef, pork, eggs, or vegetables. You'd like to know if it's a soup, salad, and if it is baked or boiled. Most menus will have this information so it's up to you to figure it out or bring a good interpreter along.

I have developed a list of what I call Key Food Kanji. Today's installment is all about meat.

For this first series, we will start with beef, pork, and chicken related dishes. Most restaurants will serve something in this category. Unless you have somehow stumbled into a tofu restaurant.

So you can see the patterns. Beef, pork, and chicken. You probably also recognized Kobe beef and saw a few other types listed. In Japan Kobe is just one choice of many possible quality beef choice. Some argue that Matsusaka beef is actually better. Others say the Omi is king.  If you're in a major city you can find restaurants that serve it and you can find it in some of the larger food basements or "depachika." But that may be another post in itself.

In the next installment we'll cover menu basics like raw, baked, deep fried, vegetables, etc. and some key restaurant phrases.

I'm an American living in Yokosuka Japan. Getting around independently in Japan and having access to the same food and menu options that the Japanese people do has been a goal of mine. So since arriving in Japan nearly four years ago I've been visiting restaurants, translating menus, and learning kanji along the way. It's been fun, I've learned so much, and met many great people along the way. I like to share the insights and lessons that I've learned with everyone else in hopes your stay in Japan is easier because of the information that I'm able to share. 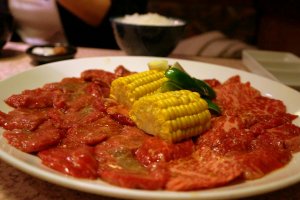 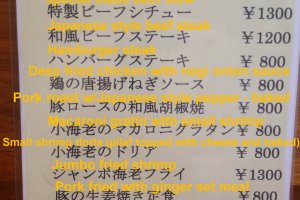 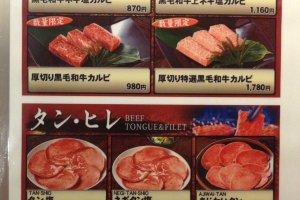 Kim 10 months ago
Guides like these are very helpful!
Reply Show all 0 replies

Preethu 3 years ago
Thanks for sharing.
Reply Show all 0 replies
2 comments in total