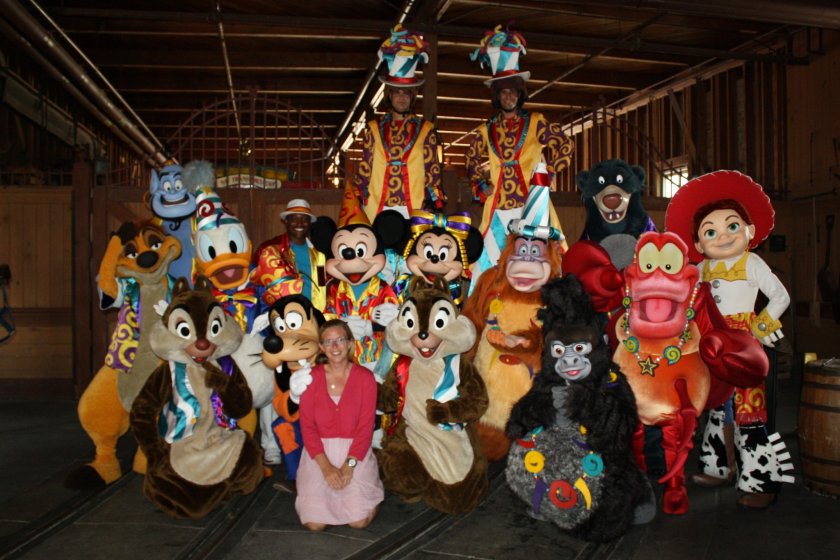 Escaping reality with Disney parks all year round

Nele Geerts (34) was born and raised in Antwerpen, Belgium, studied journalism, and now works as a manager at an insurance company. But in daily life she spends most of the year in Disney theme parks around the world. Not for work, but to enjoy her time where she likes to be the most. Nearly 160 days a year, Nele can be found in one of the five Disney resorts located in California, Florida, Hong Kong, Paris and Tokyo. I met with her in the Dreamers Lounge in Tokyo Disneyland Hotel, and asked where this Disney frenzy started.

Once upon a time

It began in 1992, at elementary school in the 5th grade. Disneyland Paris (back then Euro Disney Resort) in France, had just opened its doors, and her biggest wish was to visit this magical place. “My parents, who disliked theme parks, promised me that if I got the highest grade in my class, we would go to Disney. A month later: 90.7%, best in the class, and we never went.”

Year in year out, she asked her parents to take her, without success. But when she was 18, a friend won a one-day bus trip to EuroDisney, and asked Nele to come with her. On a cold February day in 2000, she and her friend would enter the world of magic. “But we all know how that works with bus trips on Saturdays. You arrive at noon and before six you have to be back at the bus again.”

She knew she had to come back for longer. “There was still so much to see! I really had that overpowering wow-feeling.” So Nele decided to go back with her sister. Her parents paid for the whole trip, to fulfill the promise they'd made years earlier. “And every time I visited, I kept having that same feeling.”

“There was still so much to see! I really had that overpowering wow-feeling.”

But her love for the parks grew and started to have a different twist. “In 2004 I traveled with a colleague to Walt Disney World in Orlando, the company's biggest resort. It cost me significantly more money, so I considered it a once-in-a-lifetime experience. Up to today, in total, I've visited the resort in Florida 31 times, Disneyland Resort in California 16 times, Hong Kong Disneyland Resort 11 times, Tokyo Disney Resort 6 times, and Disneyland Paris, I've lost count. This year though is an exceptional year. I've visited all the resorts at least three times, and this trip to Tokyo is my second.”

The reasons for the many trips have changed over the years, since she has met many friends at the resorts. “I admit my addiction to Disney is an escape from reality. When I visit the parks I feel overjoyed, surrounded by my favorite characters and the great atmosphere Disney breathes. But because I've met so many friends in the parks, I plan shorter trips spread out over the year to keep in touch. I wouldn’t survive a year without Disney and my friends.

"But to name my favorite park is hard. That altogether depends on its approach. Is it in terms of shows and parades, perhaps characters, or maybe even friends, or the magic feeling? For me that gives a huge difference in ranking.” But if she has to choose, it would be California or Hong Kong. She describes Hong Kong Disneyland Resort as a very laid-back resort, hardly busy. Even cast members know her. “I have my own table in my favorite restaurant,” she chuckles. "Table 22."

“I admit my addiction to Disney is an escape of reality.” "My favorite characters are Chip’n’Dale,” she says. “It started when I visited Disneyland Paris and stayed at Disney's Sequoia Lodge. Every hotel has its own mascot and for Sequoia it was Chip’n’Dale. After checking in, I received these leaflets which contained a really cute picture of Chip’n’Dale. I visited with my sister and her boyfriend and at the first night, I felt asleep while they were awake. They claim I said in my sleep 'Oh Chip’n’Dale, how cute,' and the rest of the trip they teased me, of course. But meanwhile I was creating my affection for these characters.”

She has a Facebook photo-page with nearly 10,000 followers where she shares all of her character photos. Every resort has its own roster of different versions of every character, and Nele wants to capture as much as possible. Some characters only show up on special events, but Nele hunts most of them to publish online. “Today I got recognized by several people while I was walking through Tokyo Disneyland asking me to be in a picture with them.” You could say she's a living character herself. When I ask Nele what makes her like these characters so much, she tells me they are just really adorable and mischievous, while she pulls out her bag garlanded with dozens of Chip’n’Dale keychain plushes. “I have all the cartoons of them, but in terms of other things I'm really beyond that stage. I have to have everything.”

In the early days Nele bought all of it and tells me Chip’n’Dale merchandise is quite difficult to find. Except for at Tokyo Disneyland. “The first time I visited Tokyo, I spent ¥400,000 on Chip'n'Dale merchandise. Also outside the park, in random stores such as Daiso, I found everything from the nut collectors. It was a revelation.” But her urge to buy has waned. “Nowadays I just buy whenever I like something, and focus on perception and recollection, which matters so much more to me.” When it comes to shows and parades, she prefers Tokyo Disneyland, while for surroundings and theming, it is Disney Sea. Among fans, DisneySea is considered one of the most scenic and best parks in the world. But for the rides, Nele hardly does them. She's done all the rides at least once, and her favorite rides in the Tokyo resort are Pooh’s Hunny Hunt and Sinbad’s Storybook Voyage, but it's her lowest priority. "When I’m bored, I'll wait in a short line, but I'd rather wait an hour for a character than 40 minutes for a ride.” She declares a ride is consistently the same, but a character meeting always a surprise.

For people that visit the resort for the first time, Nele recommends planning your day in advance. Prioritize your wish list and go early to get a Fastpass, since they can sell out very quickly. Also for shows and parades, most of them play several times a day but work with a lottery system. "If you always have bad luck, try to visit the first show of the day, since they normally don’t handle a lottery."

"Horizon Bay Restaurant in Disney Sea is a cheap character dining place (¥3000) where you can choose from 4 main dishes plus salads, soups and desserts. In Tokyo Disneyland, Queen of Hearts Banquet Hall (¥2000) is a great place to have dinner.” She says that when it comes to food, Tokyo Disneyland Resort is one of the cheapest. "Even at the counter service restaurants you can get quality food for a low price. But try to avoid peak hours from 11am to 1pm and 5pm to 7pm, because lines for restaurants can get pretty long in Japan.” Still she also prefers to eat outside of the parks. “My favorite Japanese meal is omu-raisu."

“One of my most memorable moments was in Hong Kong. At the Kingdom Club floor - an exclusive section for Disneyland Hotel guests -  every night a Disney character comes in pajamas wishing the elite guests a good night. The manager of the hotel told me that I could come to the Kingdom Club to have some food and drink, to enjoy this exclusive service.” But when Nele arrived, she was escorted to a separate room where a full table with food and drinks was waiting. Not much later Mickey Mouse himself - in PJs - came into the room. Since the room had a marvelous view over the park and the fireworks were about to start, Nele and Mickey took a seat on the balcony and enjoyed the spectacle together. And no less importantly, Nele got her picture of this rare Mickey Mouse outfit which regular guests normally don’t get to see.

Every six months Nele takes time to plan all of her trips ahead. “It’s really a puzzle while making decisions. Staying just one day longer somewhere can be significantly more expensive. Sometimes it’s actually cheaper to fly back home from Hong Kong, then leave again two days later for Tokyo.” In between she works extra weekend and night shifts for extra annual leave. Since 2004, her passion for the parks has ballooned, and she plans to keep doing this as long as she enjoys it. “I live from trip to trip. I always need to have something booked to look forward to. And perhaps," she laughs, "the countdown is the most fun part.” 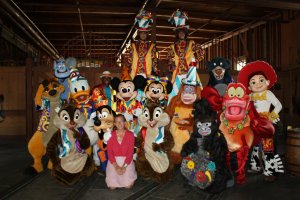 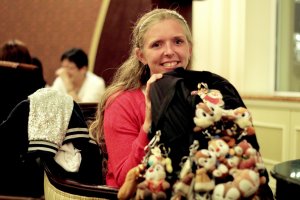 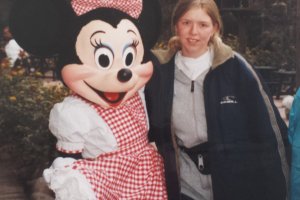 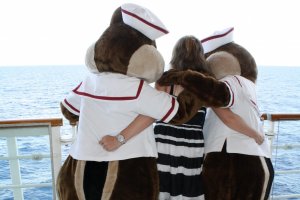 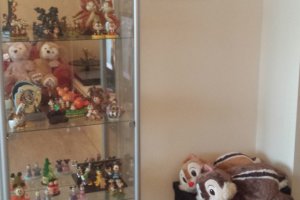 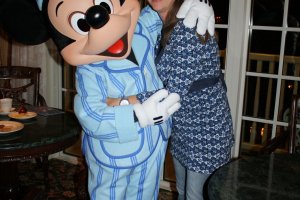 Katie Jackson 4 years ago
Awesome! I share her love of Disney. I have yet to make it out to Paris but I go to Tokyo Disneyland all the time. As corny as it sounds, It's A Small World is still one of my favorite rides.
Reply Show all 0 replies

Justin Velgus 4 years ago
An interesting story with some great personal insight, like the restaurant recommendations. Did you ask why she doesn't try to work at a Disneyland resort or theme park? If she did, they would probably lose lots of money from one of their best customers!
Reply Show all 0 replies
3 comments in total