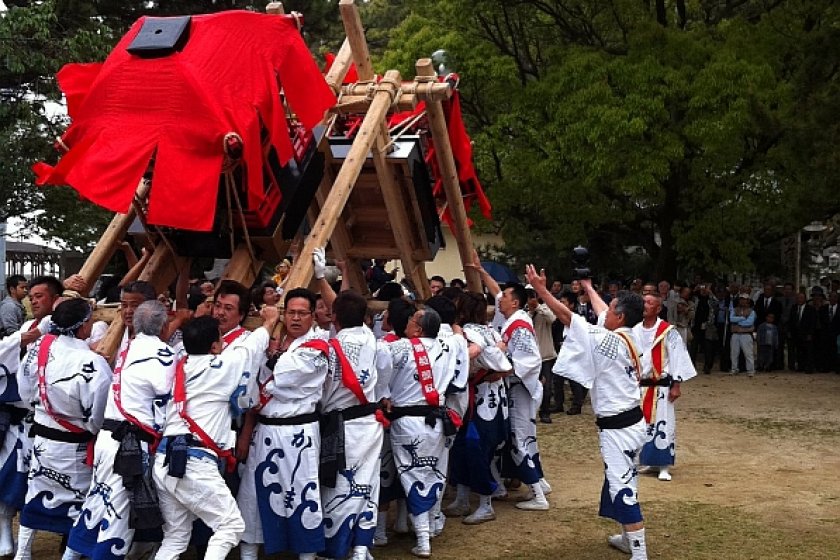 The Wet and Wild Kashima Festival

May 3rd May 4th
Roughhousing in front of Kashima shrine
Venue: Kashima Shrine When: May 3rd - May 4th 2023

In early May, the Hojo Kashima Spring Festival is held in the area known as “Kazahaya” to the north of Matsuyama.

On the first day of the festival, the Kaineri Odori is held. Odori means “dance”, but since this is performed on rather small wooden boats, the scope for movement is limited. The performance recalls the tradition of the Iyo Suigun, a sort of local coast guard operating on the Seto Inland Sea from the 12th Century. The boats are decorated with bamboo fronds and flowers. While the boats are towed back forth, teenage boys balance precariously on posts at the stern performing a ritual dance with oars, reenacting famous sea battles. At the same time, large portable god boxes (o-mikoshi) belonging to Kashima Shrine on Kashima Island, are loaded onto small boats and towed back and forth. The men who carry the shrine rock the boats from side to side so that they gradually take on water. Occasionally they capsize, in an accidentally-on-purpose sort of way, which is a guaranteed crowd pleaser. The bedraggled and exhausted men must then right their boat, bail like crazy, and get their god box back to shore and into the shrine.

Much of this activity is very photogenic, and there’s a lot of high-powered photography equipment in evidence. You can watch from the shore at Hojo or on Kashima, or pay 500 yen to get on a boat which departs from Kashima Pier at 14:00. Other attractions include traditional and modern arts on a stage in front of Kashima Shrine, accompanied by very convivial eating and drinking. I was collared by some gents who poured me a glass of their beer, and promptly knocked it all over my shirt in their joy at having me with them. Never mind, it’s all par for the course. They quickly poured me another one. The next day’s events are more sedate. A huge rope, 45 m long and 30 cm thick is gradually twisted together into a sacred rope (shimenawa) in Kashima Port. The rope is then transferred by boat to replace the old rope between the two small islands Meoto-iwa (rock couple) near Kashima. This operation can be viewed from a boat which starts from Kashima Pier at 13:00. The preparation of the rope is a laborious affair, meaningful for those involved, but not so much fun for spectators. After watching the rope-making, you can take the ferry across to Kashima, climb to the top of the hill, and watch the men attaching the rope from a vantage point way above.

The nearest station is JR Iyo Hojo, and it’s a short walk to the port from there. 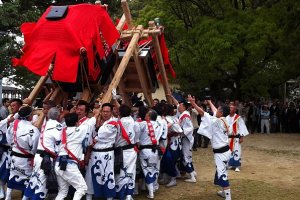 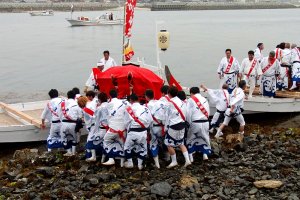