Cruise the waterways of the Venice of Kyushu

It might be missing the Doge's Palace and St Mark's Square, but Yanagawa - a small city in southern Fukuoka prefecture - has canals that could rival the famous Italian city.

Around 2000 years ago, a portion of the nearby Ariake Sea turned from tidal wetlands into more solid ground. However, locals living in the vicinity dug a series of trenches and ditches to preserve water for agricultural use on the small settlement's rice paddies. By the 7th and 8th centuries, more official channels of transportation were dug and paths between the rice paddies we linked. Life in Yanagawa was lived on the water and the routes remained vital as transportation arteries until near the end of the 19th century.

Today, visitors can travel a small portion of the 470 kilometers of canals that remain on a kawakudari ("going downstream") tour. Shuttle buses deliver boat passengers from the Nishitetsu Rail Station on the eastern side of Yanagawa to the boat loading dock. Tours last an average of 70 minutes and passengers are treated to the stories - and occasional song - of the capable boatmen who pole the crafts through the canals. Unfortunately, the commentary is only in Japanese but English speakers can follow the route on the maps provided.

Tours run year-round, and each season has enjoyable aspects to it. In spring, the banks are lined with cherry trees and you might even time it right and catch the water parade of living dolls, an event for March's Hina Matsuri (Doll Festival). In winter, kotatsu​ heaters are added to the boats to keep passengers cozy.

For the most part, the ride through the canals is a calm one. Be alert however for the occasional narrow passage or low-clearance bridge. There's also a statue or two of a kappa (water sprite) hidden along the route. Keep your eyes peeled for these mischievous fellows.

All boat cruises end just southwest of the old Yanagawa castle site. If the ride has made you build up an appetite, don't miss out on the Yanagawa specialty of unagi (freshwater eel). At least a half dozen restaurants serving the local delicacy are within a stone's throw of the disembarkation area.

Find out more about Yanagawa Canals. 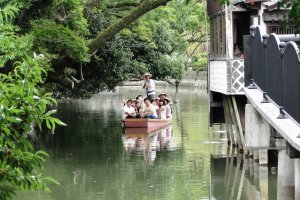 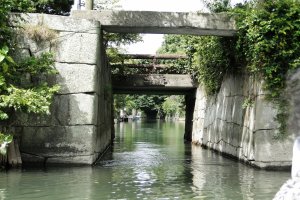 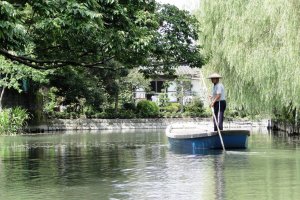