The first of Yanagawa's many Doll Festival events

The Doll Festival (or Girls' Day) may only be officially celebrated on March 3, but the canal city of Yanagawa in southern Fukuoka Prefecture devotes an entire two months to this colorful tradition.

The events are kicked off annually on February 11 with a parade of living Hina dolls. The action starts at the centrally-located Hiyoshi Shrine, with a ceremony that begins at 10 am. A dozen adults dressed in Heian period-style clothing represent the typical figurines found in a traditional multi-tiered Hina doll display. They are joined by around two dozen young girls, dressed in red kimono and sporting gold crowns on their head. A final group is garbed as Shinto priests and provides the (somewhat discordant) music for the parade itself.

The entire contingent participates in a blessing ceremony at the shrine, which includes a dance by a miko-san (shrine maiden). After that, the main participants are loaded up onto three separate carts. The traditional Hina party rides in a wagon laid out with a red carpet. In front of and behind them, the girls are seated in two wooden carts, the latter decorated with sagemon, a traditional Doll Festival decoration of the city. A troupe of taiko drummers provides a rousing send-off.

The parade route runs from Hiyoshi Shrine up to Tachibana-dori (Rt 770) and across several bridges, before terminating not too far from the Nishitestu Yanagawa train station. The floats do make one stop along the way—at a large sagemon display on Rt 770—so that the volunteers pushing the cart may rest and the followers may snap close-up photos. During the parade, the traffic on the route is NOT redirected, so if you choose to follow the floats for the duration, you should be mindful of the passing vehicles.

For those arriving by train, a taxi is advisable to reach the starting point; alternately, a walk to the shrine would take around 20 to 25 minutes. For drivers who arrive early enough, there are a number of free spaces in the dirt parking areas at Hiyoshi Shrine. Latecomers may want to avail themselves of one of the paid parking lots on Rt 770.

Despite the event marking the opening of the "Hina season" in Yanagawa, the crowd was surprisingly small. The few onlookers there were made those of us attending from out of town feel warmly welcomed.

The town of Yanagawa celebrates Girls' Day with several events over a two month period. 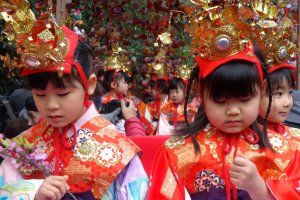 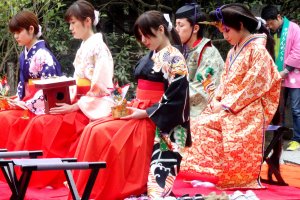 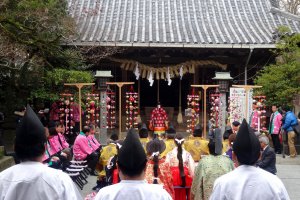 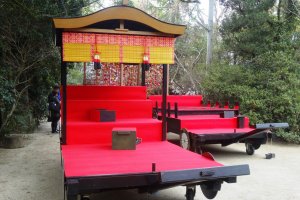 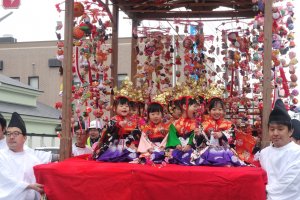 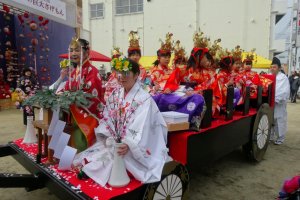 Jihad Mahmoud 6 years ago
The kids look so cute and the whole festival is so colorful.
Reply Show all 1 replies

Mandy Bartok Author 6 years ago
It's a very "local" festival, so a great chance to meet people, take pictures, and feel like you've witnessed something special!
Reply

Veronika Pilatova 7 years ago
wow! What can I do to see this beauty? It must be big experience.
Love so colorful traditions! :)
Reply Show all 1 replies

Mandy Bartok Author 7 years ago
Hi Veronika - you can actually catch a similar event on the 3rd Sunday of March when they do a boat parade on the canals of Yanagawa. All the same particpiants are there, dressed up in gorgeous kimono, and the boats are poled down the canals by Shinto priests. It's lovely!
Reply
4 comments in total