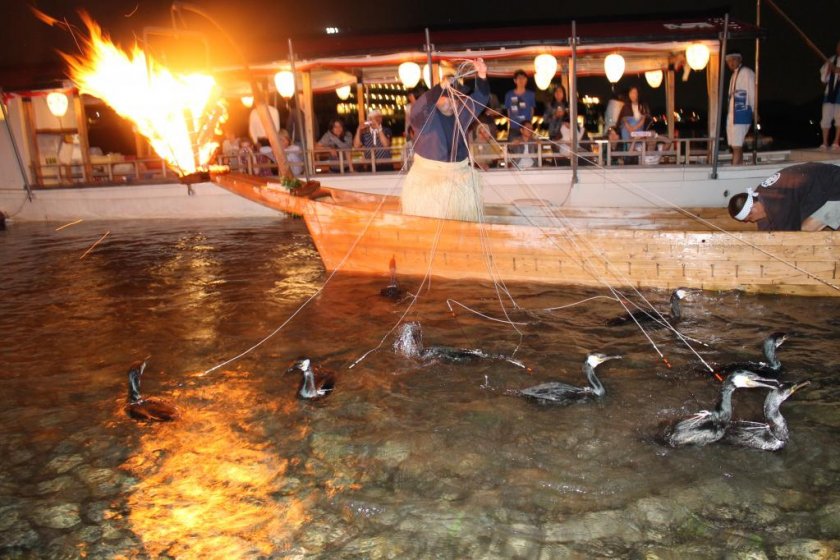 Gifu is famous for Ukai or cormorant fishing. Japanese fishermen have been practicing ukai for over one thousand years, but today it is rare. The Nagaragawa River in Gifu is one of the few places where the cormorant fishing tradition has been preserved. When I got the opportunity to watch ukai fisherman, known as Usho, in action, I signed up at once. My friends and I eagerly climbed aboard the bus to the Minato-Machi area where the fisherman and their cormorants awaited us.

Cormorant fishing always takes place in the evening. At 5:45 p.m., just before twilight began to fall, our group gathered near the dock for an orientation from a cormorant fishing master, one of a handful of men whostill carry on the ancient practice of training diving birds known as cormorants to catch river trout or Ayu. Possessed with knowledge passed down to him through many generations, the fishing master stood before us wearing the garb of his ukai ancestors: a straw skirt that repels water, a black cotton kimono shirt that will keep him cool, and a black linen head wrap called Eboshi that will protect him from the fire of the torches on his boat.

After greeting us, the fishing master described what we were about to see and offered to demonstrate how cormorant fishing actually works. He brought one of his black diving birds onto the dock, a kind of leash tied around its neck. Our curiosity about ukai swelled as we watched the fisherman offer a fish to the waiting bird. The cormorant quickly swallowed the fish whole. Seconds later, the fishing master pulled on the bird’s leash, causing it to release the fish, still whole and completely undigested. The fishing master explained that he would take as many as a dozen cormorants out with him on his boat each night, and that all of them would dive for fish, taking them into their throats, then releasing them to the fisherman, just as this bird had done right before our eyes.

On the boat, we were given plastic bags in which we stored our footwear and proceeded to sit upon the tatami-covered floor of the boat. It was very comfortable especially if you don’t sit seiza-style the whole time! We set sail with the mountainous view of Gifu around us. The water was so clear we could see to the bottom. It made me want to take a dip. After a while, it was time to eat. I loved how all the food in my bento box looked so inviting to eat that it didn’t matter that I didn’t know what it was; I just had to eat everything. While we were eating, we were entertained by a group of female dancers with a traditional dance. Their boat kept going back and forth for everyone in the spectator boats to see their performance. Everything about that moment was so relaxing. I couldn’t help but say to myself, “This is what I call a good life.”

The fireworks signaled the start of cormorant fishing. We saw the cormorant masters in their respective boats using their cormorants to catch fish underwater. I kept hearing my companions say “sugoi” every time a cormorant caught an ayu. Everyone was also vying for a perfect spot in the boat to photograph the delightful scene. Luckily, our spectator boat was so near the cormorant fishing boat that we were able to clearly see the whole fishing method. Everything about it was so attractive. The bonfire in the boat was kept illuminated to attract the fish but even I was so drawn to its light. The formation of all six fishing boats, called sougarami, marked the end of the event.

Near the dock, there is a place where you can buy different souvenirs like t-shirts and keychains with pictures of cormorants imprinted on them. There was also a large television on which you can view a video of cormorant fishing, and check out pamphlets that explain the history of cormorant fishing and provide details about the viewing boat.

It was such a delight to have the chance to see the cormorant fishing. The viewing process was so enjoyable and organized. If you want to relax and at the same time learn something about Japanese history and culture, then this is one of the best ways.

See the PhotoStory: Cormorant Fishing on the Nagara River

Born in the Philippines, I came to Japan October 2011 to live and study ---which has been a long-time dream. （⌒▽⌒） 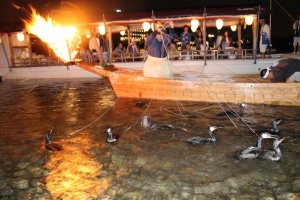 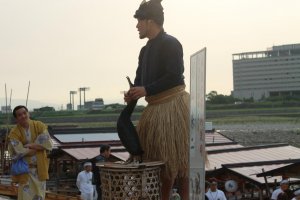 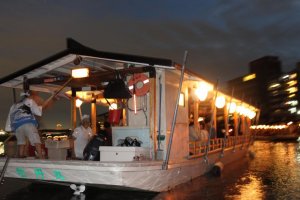