Home to some quality history and heritage, Fuchu City also appeals with its museums and galleries. Both 20th-century modern and experimental art have a place here, cultural treasures abound while a splendid open air museum is a real highlight. Here is an introduction to the museums and galleries of Fuchu and how to reach them.

The city-run Fuchu Art Museum focuses on modern 20th century Japanese paintings. The gallery's permanent collection houses many works by local artists while an ever changing exhibition schedule showcases both Japanese and overseas artists. The admission fee of JPY200 is, by any measure, quite reasonable.

A 17-minute walk or an 8-minute Chu Bus ride from Fuchu Station on the Keio Line.

Historical architecture is the order of the day at the Fuchu Kyodo no Mori Museum. An open-air museum, the site also features a splendid garden with the plum orchard and its one thousand plum trees of particular delight, especially during the annual spring plum festival. What's more, general admission is free.

A 20-minute walk from Fuchuhommachi Station on either the JR Nambu or Musashino lines.

A weekends and public holidays-only destination, the Okunitama Jinja Treasure Museum is part of its namesake's shrine and houses an incredible collection of artefacts. Taiko drums, mikoshi portable shrines, swords, statues, calligraphy and ancient documents all feature and for the tiny JPY200 admission fee, an absolute steal for such quality.

A tiny private gallery, LOOP HOLE began as a visual-effects studio and now also works as a gallery space for artists in western Tokyo. A passion for experimentally creative efforts, the gallery hosts a number of exhibitions throughout the year, giving up and coming artists a chance to be discovered. 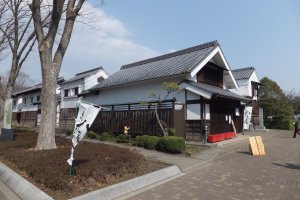 Elena Lisina a week ago
Those distant districts are like small towns - I like them!
Reply Show all 1 replies

Sleiman Azizi Author a week ago
There's a lot out there.
Reply
2 comments in total
Back to Contents