A grandpa tree and a parade of statues

A tiny city in northwest Tokyo it may be but Kiyose City is certainly not without its charms. The city's temples and shrines feature ancient trees, parades of stone and simple ambiences that offer much to the discerning visitor. Here is an introduction to some of the temples and shrines of Kiyose and how to reach them.

A bamboo grove at the entrance sets up a nice little ambience upon entering the grounds of Chogenji Temple. Handsome, regal and well-maintained, the greenery surrounding the temple combined with the sparse brown grounds highlight the red bibs worn by the jizo statues, adding a touch of colour to the complex.

A 9-minute drive from Kiyose Station on the Seibu Ikebukuro Line.

While the incredibly elaborate three-storied pagoda is the star here, the 400-year old site that is Enpukiji Temple features many details that bring it to life. The temple's rather robust nio guardian statues are one point of interest while the exquisitely calligraphically engraved entrance stone is another that catches the eye.

A 12-minute walk from Akitsu Station on the Seibu-Ikebukuro Line.

Surrounded by trees, including what is thought to be a 350-year old zelkova tree designated as a natural monument of the city, Geshuku Hachiman Shrine retains the air of its being founded in the 14th century. The pathway leading to the shrine helps as it is lined with many trees with the shrine set deep within.

An 8-minute drive from Higashi-Tokorozawa Station on the JR Musashino Line.

Despite being to a lovely bright red bell tower, Zenryuji Temple is statue heaven. Fierce-looking nio guardian statues, kannon statues, 17 Buddhist monk statues all sitting in a row... the statues here don't ever seem to end. Even the stone lanterns at the temple are decorated with carved with dragon and lion motifs.

A 13-minute no.64 bus ride from Kiyose Station on the Seibu Ikebukuro Line. 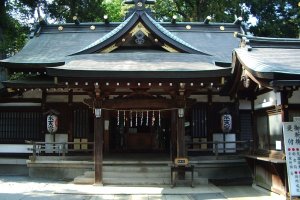