Everybody wants to live here

Considered by many to be the most sought after area of Tokyo to live in, Musashino City is also home to some lovely temples and shrines. Clustered together with easy access from the main train stations, they are all worth a visit when in the area. Here is an introduction to some of the temples and shrines of Musashino and how to reach them.

Statues of lantern-carrying demons, jolly-bellied sages and a rather curious full-bellied raccoon dog are just some of the features of Anyoji Temple. Add to that a koi carp-filled pond, a solid shoro bell tower and this lovely little temple set deep within well looked after grounds makes for a pleasant break from world around it.

A 7-minute walk from Kichijoji Station on the JR Chuo Line.

Home to plenty of space, torii sacred gates, and a chozuya ablution well, Kitsukui Shrine presents itself as a lovely combination of tradition and design. An added bonus is the kaguraden ceremonial hall and close by, a fujizuka mini-version of Mt Fuji, part of a cult that worshipped the mountain in the Edo period.

A 5-minute walk from Musashikasai Station on the JR Chuo Line.

Set within a cluster of zelkova and camphor trees, Musashino Hachimangu Shrine is thought to be a 'power spot for the area. Surrounded by peace and quiet, this simple shrine with its aesthetically pleasing construction, features komainu guardian statues with cubs. The shrine hosts numerous local festivals throughout the year.

A 7-minute walk from Kichijoji Station on the JR Chuo Line.

Founded some time in the mid-17th century, Renjoji Temple begins with a sanmon entrance gate followed by plenty of space. The open grounds are headlined by a beautiful temple building decorated with intricate wood-carvings as well as a statue of Nichiren, founder of an influential sect of Buddhism in Japan.

A 2-minute walk from Kichijoji Station on the JR Chuo Line. 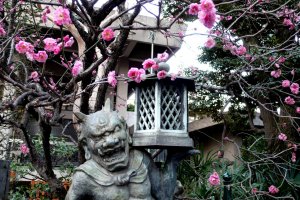 Lynda Hogan a month ago
Another great round up. These guides are so handy, thank you.
Reply Show all 1 replies

Sleiman Azizi Author a month ago
Thanks for reading!
Reply

Kim a month ago
I love the cover photo!
Reply Show all 1 replies

Sleiman Azizi Author a month ago
There are some good shots out there.
Reply
4 comments in total
Back to Contents