Along with its classical architectural designs, the direct passage from the temple ground's entrance gate to the main building itself sets a decidedly regal tone to Honkaku-ji Temple and its surrounds. Established in the early-17th century, the almost rustic appeal of many of its design elements is very much on display.

A 15-minute walk from Hikarigaoka Station on the Toei Oedo Line.

Home to one the city's oldest buildings, Nakamura Hachiman Shrine remains nonetheless a typically unassuming Shinto shrine. Once the spiritual centre for the local village, the shrine's former details can still be found throughout the structure with specks of paint still clinging on two hundred years or so after first being painted.

A 12-minute walk from the South Exit of Nakamurabashi Station on the Seibu Ikebukuro Line.

Established back in the late-14th century, Sanpoji Temple is one of the many temples and shrines to be found in the lovely Shakujii Park. Once protected by the Tokugawa family, the temple’s regal main building sits proudly alongside an incredibly beautiful two-storied pagoda, as well as a giant Kannon statue. Plenty of trees give off quite the natural ambience.

A 15-minue walk from the South Exit of Shakujii-Koen Station on the Seibu Ikebukuro Line.

Featuring a pair of lanterns related to the Tokugawa family, Shogakuin Temple is said to have been built as a protective ward for a nearby shrine in the mid-15th century. Treasures of the temple that survived the religious turmoil of the Meiji period include a pre-17th century painting of the Buddha entering Nirvana.

A 14-minute walk from Nerima Station on either the Toei Oedo or the Seibu Ikebukuro lines. 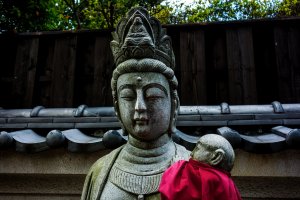 Elizabeth S a month ago
Wow, Shakuji Park rivals Inokashira Park for size. Lots of Tokugawa connections at Sanpoji Temple. There's a gate there that once stood in front of Katsu Kaishu's house.
Reply Show all 2 replies

Sleiman Azizi Author a month ago
It's up there, right? Nerima really is a good place.
Reply

Bonson Lam a month ago
Wow you really know Tokyo!
Reply
3 comments in total
Back to Contents