A taste of the local foods of Wakayama

Grounded in the experiences of an ancient past, Wakayama prefecture's cuisine is a deep combination of the historical and the adaptable. The original forms of sushi find a home here with heritage-rich foods like balls of rice wrapped in aromatic leaves, and fermented mackerel. A challenging agrarian past lead to a delicious variation of the nation's rice cake while chance opportunities have lead to more modern dishes. Here is a simple guide to some of the regional cuisine of Wakayama.

Traditionally a quick bento packed lunch, meharizushi were once so large that the eyes of people who saw them were left wide open, hence the name meharizushi which means 'wide-eyed sushi.' A great vegan food of balls of rice wrapped in a sheet of pickled takana leaf, meharizushi portions these days tend to be smaller but of course, no less delicious.

Said to have been eaten for over 800 years, saba-no-narezushi is vinegared mackerel over rice with a twist - wrapped with a danchiku giant reed leaf for a night. The rice absorbs the fish oil, the fish absorbs the aroma of the leaf and the person who eats it absorbs a uniquely delicious Wakayama culinary tradition.

Decades ago, asking for his soba noodles to be pan-grilled with eggs, a customer never realised the tastiness that he would inadvertently unleash onto the people of Wakayama. Known as Gobo-sechiyaki, this okonomiyaki without flour has become a prefectural hit, a culinary example of chance leading to success.

A food hearkening back to the days of real difficulty for farming folk, the imomochi of Wakayama are potato rice cakes made from the easier to grow sweet potato. Mixed and kneaded with the usual rice cake, this softer and smoother version became a regular source of sustenance for the people of Wakayama's southern coast. 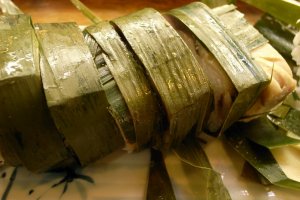 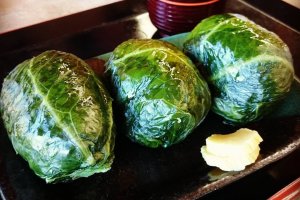 Sleiman Azizi Author 3 months ago
And to think that I drool over regular mochi!
Reply

Elizabeth S 3 months ago
Ah, I wish I’d known about these local specialties before I visited!

I guess I have to go back...
Reply Show all 1 replies

Sleiman Azizi Author 3 months ago
The thing that surprised me when researching this article was just how much historicity there is in a lot of the foods in Wakayama.
Reply

Sander van Werkhoven 3 months ago
Hey, a sushi named after the Citroën Mehari! How cool is that!

The saba-no-narezushi is the one I'd like to try most though....
Reply Show all 1 replies

Sleiman Azizi Author 3 months ago
Saba is such a great flavour. One of my favourite fish for sushi.
Reply

Kim B 3 months ago
I'm all for inventive ways to get my carb fix. Learned how to make imomochi at a cooking class in Tokyo several years ago and they've been a favorite since.
Reply Show all 1 replies

Sleiman Azizi Author 3 months ago
Mochi is one of my favourite foods, imomochi or otherwise.
Reply

Sleiman Azizi Author 3 months ago
Ah, you're onto a winner then!
Reply
10 comments in total
Back to Contents