Some say that Suginami City Ward is a sleepy residential area but with over one hundred temples and shrines, the ward is heaven for lovers of history and heritage. Martial arts demonstrations, power stones and good luck fire rituals can all be found in the area. Here is a simple introduction to a few of the temple and shrines of Suginami and how to reach them.

Rebuilt in the late-14th century by a warrior returning to farming, Amanuma Kumano Shrine is home to five smaller shrines within its boundaries. Flanking one of the shrines are a pair of power stones as well as two cedar tree stubs that had been planted in the shrine over six hundred years earlier as part of a prayer for military success by the famous Nitta Yoshisada.

A 10-minute walk from Ogikubo Station on the Marunouchi or the JR Chuo lines.

A survivor of the bombing raids of World War Two, it's little wonder that Horinouchi Myoho-ji Temple is home to many structures culturally recognised by city and state. Besides these many buildings, the temple also features the traditional ceremonies like the yakuyoke ritual to ward off evil and the Joya no Kane, a New Year's Eve bell ringing event.

A 14-minute walk from Shin-Koenji or Higashi-Koenji Stations on the Marunouchi Line.

Established in the mid-16th century, Koenji Temple saw its fortunes rise courtesy of patronage by Iemitsu, the third Tokugawa shogun with the renaming of the area after the temple. One of many in the area, this relatively unadorned temple is home to a 15th-century image of Amida while its stately appearance features a beautiful entrance gate.

A 4-minute walk from Koenji Station on the JR Chuo Line.

With martial arts and traditional archery festivals held annually, Omiya Hachimangu Shrine could easily be mistaken by some as an action adventure location. This action gets ramped up a notch or two when Tokyo's third largest shrine parades its massive thirty-two mikoshi portable shrines in mid-September.

A 7-minute walk from the North Exit of Nishi-eifuku Station on the Keio Inokashira Line. 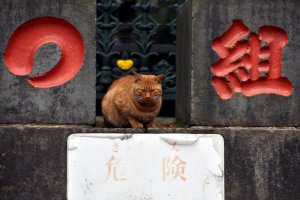 Lynda Hogan 3 weeks ago
Omiya Hachimangu shrine sounds very entertaining. I must check it out.
Reply Show all 1 replies

Elena Lisina 3 weeks ago
I always take photo of neko when see them in temples! Maybe they're special? :)))
Reply Show all 1 replies

Sleiman Azizi Author 3 weeks ago
The cat love in Japan is strong.
Reply
6 comments in total
Back to Contents