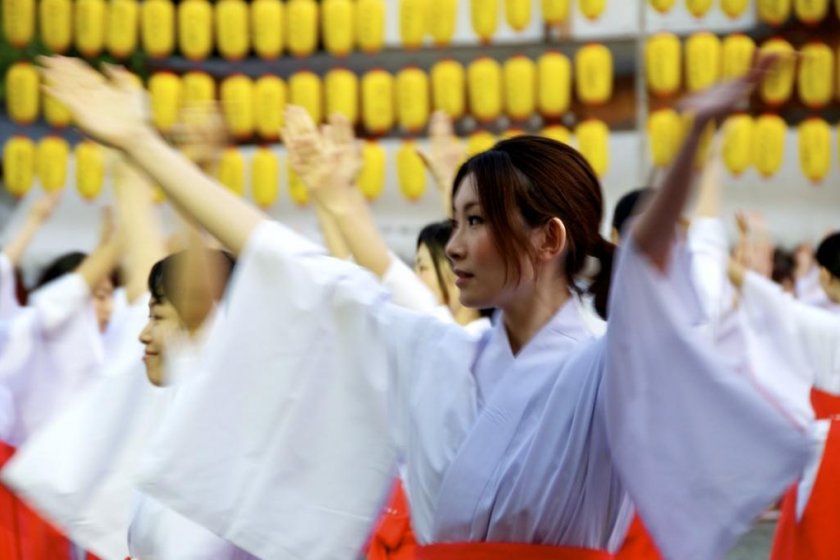 Once a year, the spectacle of 100 shrine maidens dancing by lantern light can be seen in the forecourt of Hiroshima Gokoku-jinja Shrine. This is part of the "Mantou Mitama Matsuri", a shrine festival that began in 1975 on the occasion of Showa Emperor Hirohito's 50th birthday. Ostensibly to assuage the spirits of the war dead enshrined in the shrine, the festival also seems to have incorporated an opportunity for young unmarried women to wish for making a good marital match.

In many ways the event resembles the "Festival of Lights" Mitama Matsuri held at the shrine that sits at the top of the national network of Gokoku Shrines established to enshrine Japan's war dead at the end of the 19th century, the controversial Yasukuni-jinja Shrine in Tokyo. Hiroshima's Mantou Mitama Matsuri, however, is a far more intimate affair, without the stalls, haunted houses, stars singing karaoke, and without the 300,000 visitors. Here, you might find around 200 or 300 people, a mixture of relatives of the young women taking part, amateur photographers, otaku shrine maiden fans, and a few somewhat bemused tourists.

As far as the public is concerned, the festival starts on Saturday evening just before dusk. Things begin with a ceremony in the main shrine building, followed by the ceremonial lighting of fires in iron baskets, called kagaribi, set up in the forecourt. Then, the 100 or more young ladies dressed in the flowing red and white robes of miko shrine maidens, pour through the large stone torii gate into the forecourt that stands at the entrance to the shrine.

The participants are all unmarried women under the age of 30 who have signed up to take part in the event, having seen the call for dancers on the shrine website, in local newspapers or on posters around their neighborhoods. Some of them travel some distance to take part. They perform three dances, which resemble summer bon dances, to music that ranges from the very militaristic-sounding to Showa-era pop. The women do a 3-hour practice a week or so before the event, but I did wonder how they managed to keep all the moves straight in their heads.

The sun having gone down during this first performance, the focus then shifts back to the area in front of the main shrine building. After a more austere dance performed by full time shrine maidens, a local taiko drum group ramps up the tempo with an energetic display. On my visit, this was followed by four members of the Ato Kagura troupe performing an elaborate sword dance, complete with fireworks. During this time, the shrine maidens for the day are enjoying a break, wandering around, eating shaved ice, chatting and having their photos taken by family members.

For the festival finale just before 9pm, the young women perform their dances once more. This time, however, small lanterns are incorporated into the routine. The little lights bobbing up and down, with the shrine buildings and forecourt decorated with many, many more lanterns as a backdrop, it makes for a lovely sight.

The festival continues the following day with a children's sumo tournament.

100 "miko" shrine maidens dance by lantern light on the first night of the Mantou Mitama Matsuri at Hiroshima Gokoku-jinja Shrine...

Find out more about Gokoku Shrine. 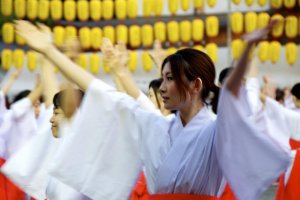 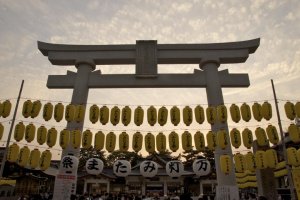 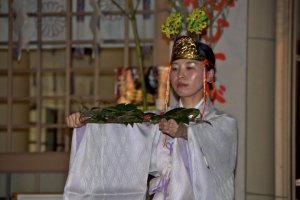 2021 events has been cancelled due to the spread of the new coronavirus.