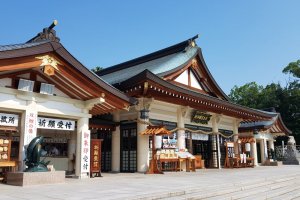 Located on the grounds of Hiroshima Castle, Hiroshima Gokoku Jinja (広島護国神社) is a Japanese Shinto Shrine in central Hiroshima City.

"Gokoku" Shrines are Shinto shrines designated as places of worship for those who have died in war. Like the controversial Yasukuni Shrine in Tokyo, what became Hiroshima's Gokoku Shrine was also originally constructed in 1868 to commemorate the Hiroshima Han victims of the Boshin War. Seventy-eight souls were enshrined in the Futabanosato shrine, named Mikureisha (水草霊社).

Eventually, the total number of souls enshrined there reached 92,700, including the soldiers from the former Aki no kuni (now western Hiroshima Prefecture) who died in Japan's wars up until the start of the Great East Asian War (as World War 2 post Pearl Harbor is known in Japan) and around 10,000 workers and volunteer corps who were stationed in Hiroshima and lost their lives to the A-Bomb.

In 1934 it was dismantled, rebuilt and renamed Kansaishoukonsha (官祭商塊社), and moved to a corner of the west of the military parade ground, where the Hiroshima Municipal Baseball Stadium stood until the end of 2008. In 1939, its name was changed by order of the Interior Ministry to the Hiroshima Gokokujinja. In 1945 it was destroyed by the atomic bomb, and was rebuilt on the current site within the grounds of Hiroshima Castle in 1956 with the aid of donations from the citizens of Hiroshima.

The current main building is even more recent, rebuilt in 1995, when the grand stone slab approach was also added.

Events at the shrine are held throughout the year.

Gokoku Shrine can be found within the main castle grounds of Hiroshima Castle.

By foot: The castle is about 10-15 minutes walk from both Peace Park and Shukkeien Garden. By foot, it can form part of an ideal day itinerary.

Once a year, the spectacle of 100 shrine maidens dancing by lantern light can be seen in the forecourt of Hirohima Gokoku-jinja..

100 "miko" shrine maidens dance by lantern light on the first night of the Mantou Mitama Matsuri at Hiroshima Gokoku-jinja Shrine...

Annual festival held around January 15th all across the country to burn old talismans and charms and pray for good luck in the year..

Gokoku-jinja is a large shrine next to the Hiroshima castle often bustling with activity.

If you like Japanese dishes and love your vegetables, you will enjoy a meal at NonoBudou 野の葡萄 "Natural Garden Terrace"

Shukkeien Garden, located in central Hiroshima City, is a traditional Japanese-style garden loved by visitors and locals alike. This natural oasis among..