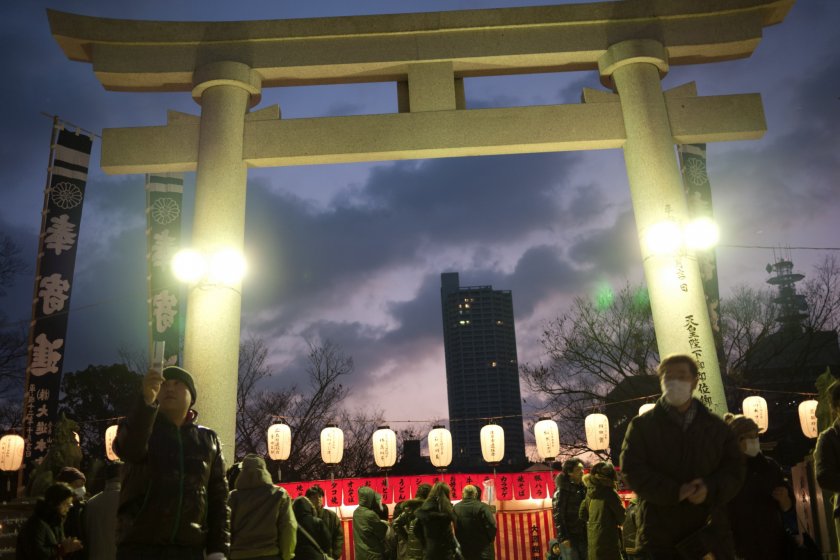 Hiroshima city's Gokoku-jinja is a large shrine next to Hiroshima Castle and is always bustling with activity. There are many religious ceremonies and special events held here throughout the year (detailed below), but you can find interesting activities going on almost any day of the week.

Often, you will find visitors doing religious rites to celebrate their child's birth or children come dressed in beautiful kimono to observe Shichi-go-san (when kids turn 7, 5 and 3). In January, the shrine is busy with many young adults celebrating their Seijin-no-hi (Coming of Age Day), but at any time of the year you might find students praying for good luck on a test or to get into their dream school or job; young couples wishing for a good marriage or children and many more people visiting this shrine for luck and fortune.

Even the more mudane practices can seem interesting to visitors- car blessings, good luck charm purchases, writing and hanging of Ema wish plaques and prayers at the altar for luck and happiness.

"Gokoku" Shrines are Shinto shrines designated as places of worship for those who have died in war. Like the controversial Yasukuni Shrine in Tokyo, what became Hiroshima's Gokoku Shrine was also originally constructed in 1868 to commemorate the Hiroshima Han victims of the Boshin War. 78 souls were enshrined in the Futabanosato shrine, named Mikureisha (水草霊社).

Eventually, the total number of souls enshrined there reached 92,700, including the soldiers from the former Aki no kuni (now western Hiroshima Prefecture) who died in Japan's wars up until the start of the Great East Asian War (as World War 2 post Pearl Harbor is known in Japan) and around 10,000 workers and volunteer corps who were stationed in Hiroshima and lost their lives to the A-Bomb.

In 1934 it was dismantled, rebuilt and renamed Kansaishoukonsha (官祭商塊社), and moved to a corner of the west of the military parade ground, where the Hiroshima Municipal Baseball Stadium stood until the end of 2008. In 1939, its name was changed by order of the Interior Ministry to the Hiroshima Gokokujinja. In 1945 it was destroyed by the atomic bomb, and was rebuilt on the current site within the grounds of Hiroshima Castle in 1956 with the aid of donations from the citizens of Hiroshima.

The current main building is even more recent, rebuilt in 1995, when the grand stone slab approach was also added.

There are ceremonies held throughout the year and Gokoku Shrine is one of the most popular places in Hiroshima for celebrating hatsumode at when over half a million people pack the concourse in the first seven days of the year. The local baseball team also make a spring visit to pray for a successful season every year in March

(*) these dates and times are only general guides, changes and cancellations may occur

The 1934 picture of Gokoku Shrine is from the shrine's website which reminds us to fly the hinomaru flag on national holidays.

Find out more about Gokoku Shrine. 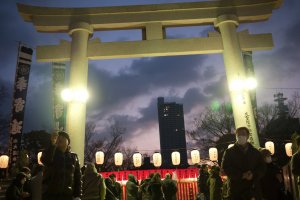 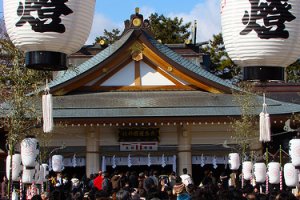 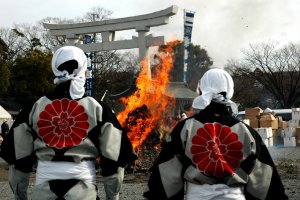