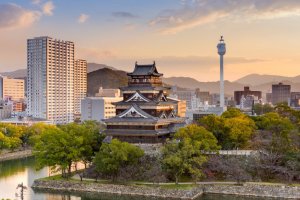 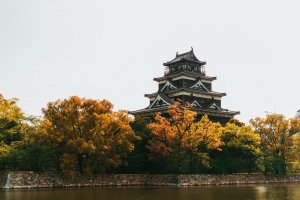 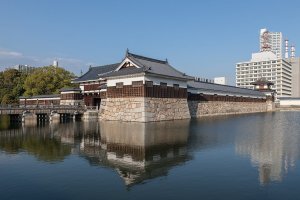 Hiroshima Castle, also known as Carp Castle, was originally built in the 1590s. It was destroyed by the atomic bomb along with the rest of the city in 1945 and rebuilt in 1958. Since then, it has also served as a museum of the history of Hiroshima before World War II The history of the castle itself, as well as Japanese castles in general, is clearly explained.

Hiroshima Castle is a good example of a castle built on a plain in the center of a city as opposed to castles on hills and mountain tops. Its main tower is five stories high and its grounds are surrounded by a moat. Within the castle grounds there is also a shrine, some ruins and some reconstructed Ninomaru buildings (second circle of defense).

Following its restoration, the castle's main keep now serves as a historical museum that covers four floors, with an observation deck on the fifth floor.

This secondary defensive compound sits off the southern side of the castle grounds along the moat. View the restored gates, bridges and turrets. Free admission. Hours: 9:00 to 17:30 (Apr–Sept) or 16:30 (Oct–Mar)

In the evening, Hiroshima Castle can be seen lit up making for a beautiful sight and reflection in the surrounding moat.

By foot: The castle is about 10-15 minutes walk from both Peace Park and Shukkeien Garden. By foot, it can form part of an ideal day itinerary.

More about transport in Hiroshima >

A Walk Around Hiroshima Castle

The 1.5km path around Hiroshima Castle will take you on a scenic journey through time and provide you with beautiful 360 degree..

One of the main features of Hiroshima city, this reconstructed castle offers a glimpse into Hiroshima's feudal history.

The Hiroshima Kanzake Festival brings the delights of warmed sake to the world. Warming the beverage is said to bring out a depth..

If you like Japanese dishes and love your vegetables, you will enjoy a meal at NonoBudou 野の葡萄 "Natural Garden Terrace"

Shukkeien Garden, located in central Hiroshima City, is a traditional Japanese-style garden loved by visitors and locals alike. This natural oasis among..