Beginning in June 2019, the large torii gate of Itsukushima has been undergoing renovations, though a completion date has not been announced.

The Miyajima Fireworks Festival was unfortunately discontinued after the 2019 event.

The Miyajima-on-the-Sea Fireworks Festival, more commonly known as the Miyajima Fireworks Festival, is an annual display of some of the best fireworks that Hiroshima has to offer. All fireworks shoot off over one of its most famous places, the floating torii of Itsukushima Shrine, also known as Miyajima. The festival of lights takes place every August and is one of the most famous fireworks display in Japan.

Over 300,000 people enjoy the flamboyant night show every year, so if you plan on attending it’s important to come prepared. Many visitors in the past recommend booking a nearby hotel or hostel from which to watch the fireworks. Others like to get right up close to the action and take the ferry to the island. But everyone can agree that the fireworks are top-notch and they offer some of the most enchanting photographs of the famous torii arch.

With 5,000 fireworks being launched over the course of one hour viewers can easily take in the radiant night for as short a time as they like, or enjoy the full hour of fireworks parade. Two hundred of the fireworks are even launched directly from the water, adding a splash of color on the dark ocean waters. As the annual theme of this dazzling show changes with each coming you can be sure that no show will ever be the same—making this a great opportunity year after year.

Prepare yourself for the boom and pops of fireworks being shot into the night sky and look forward to the glittering display of lights as they burst open. If you want to avoid the crowded ferries and island standing, view the fireworks from the mainland of Hatsukaichi or Hiroshima for a different perspective of the fantastic light display. Wherever you watch the fireworks from, the Miyajima-on-the-Sea Fireworks Festival is one summer event not to be missed.

Despite having lived in Hiroshima for many years, this was the first time I've made the journey to Miyajima Island for its annual fireworks festival in the beginning of August. The crowds have always put me off going previously, but this year we decided to stay the night on the island and I actually ended up watching the display from our room at the Mikuniya guesthouse.

Of course, I was a bit disappointed not to be able to get down closer and be able to frame a shot with the silhouette of the famous giant O-torii gate in the foreground as you see on many tourist brochures. However, I did manage to get some pretty interesting shots. I hope this humble selection may show that it is possible to enjoy the display from a less crowded spot on the island.

Find out more about Itsukushima Shrine. 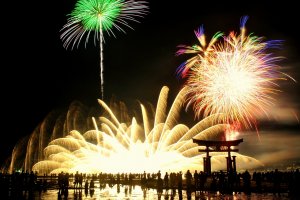 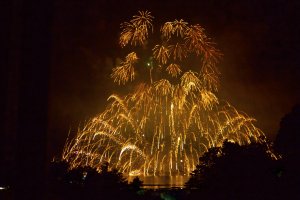 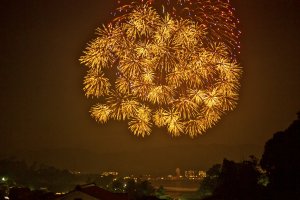 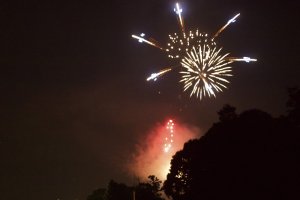 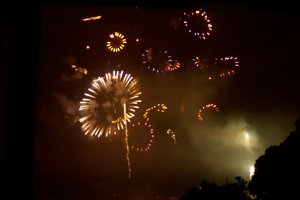 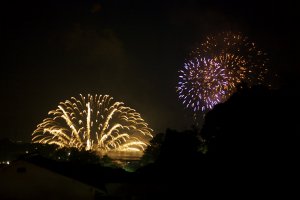 Michelle Montaño 8 years ago
I hope to see the fireworks this summer, although I'm also a bit put off by the crowds. Some of the fireworks look incredible, so I think it will be worth it.
Reply Show all 0 replies
2 comments in total