As a day trip from Sapporo, I went to the fishing town of Otaru.

Otaru was one of the first places to be colonized by the Japanese when they came to Hokkaido and one of the few places where westerners initially came following the re-opening of Japan, and therefore the town was once a very rich and important trading hub.

It also made a lot of money from fishing herring which were abundant in the area.The town has a network of canals flanked by Meiji era warehouses and a high street with lots of grand buildings like one of the first Bank of Japan buildings, a courthouse, and town hall etc.

They have a very unique style that is a blending of western red brick and steel with more traditional Japanese wood and bamboo. Many of these shops sell Venetian glass as the craftsmen who used to make the floats and weights for the Herring business found a new outlet for their talents once the fishing industry didn’t need them anymore. There is even a glass blowing workshop with an open side, where you can watch the for free.

There is canal network that is no longer used but is decorated with ice lights and candles every evening in February for what is known as the 'Otaru Gleaming' Festival.

It is very pretty, and after an afternoon slithering around the very icy streets between fish-topped Herring warehouses, glassware stores and grand old Banks, I went to the Otaru Beer Hall, where they sell the local German-style beer and food, complete with Oompah-pah music (after partaking of much of the local brew in Sapporo, it would be rude not to give its neighbor a try...) to wait for it to get dark.

If you want to try it but cannot make it to Otaru they have a sister bar in Sapporo.

When I came out later the town had been transformed; it was covered in lots of tiny little lights and small floating candles had been set on the canals. The path that runs along the canal was filled with small snow statues and dioramas, many of a heart-shaped and romantic persuasion made by the townspeople; a much smaller but more intimate affair than the huge monoliths in Sapporo.

Its shows that you can make a bunch of old canals and warehouses fabulously photogenic and immensely popular with the application of tea-lights. One particular spot on the bridge close by to the Beerhouse allows you to get a shot over the canal, the pathway of lights and a old fashioned wrought iron street lamp - this is very popular and busy, but well worth the wait - and the elbows - to get!

Find out more about Otaru Canal. 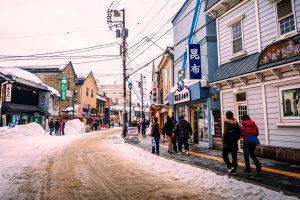 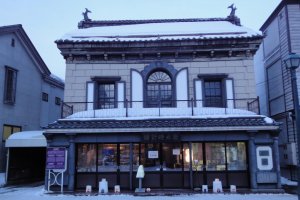 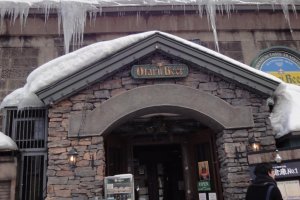 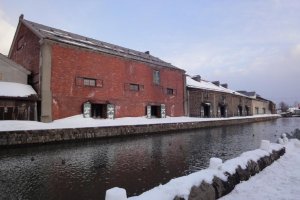 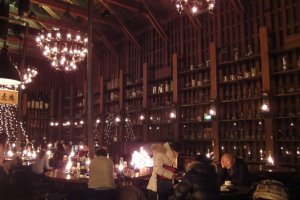 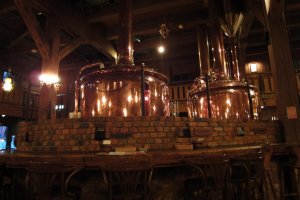