The little town that could

Many people in Tokyo have no idea how different Hokkaido is. It is almost 200 km from Sapporo to Obihiro, the same distance as between Shizuoka and Tokyo. But instead of 20 million people and world’s 15th biggest GDP (Tokyo's GDP is equal to that of South Korea), there are only 5 million people in the whole of Hokkaido.

Tokyo became the biggest metropolis in the world just after the Meiji Period, and Osaka was even bigger than Tokyo in the 1920s. On the other hand, parts of rural Hokkaido in winter snow look more like Siberia than Tokyo. In fact during the ice age, Hokkaido was connected with Siberia.

Halfway between Obihiro and Sapporo is Yubari, city of 10,000 that used to be the home to 100,000 people. The trains only call at Yubari station five times a day, unlike Tokyo where there could be five trains at the station every minute. Yet Yubari has a faded charm that can't be found in Tokyo. Faded posters and architecture, lost in time while Sika deer wander the streets.

In the midst of the snow season, people from around the world celebrate this city’s past and future at the Yubari Fantastic Film Festival. The name evokes images of circuses and fun fairs, as if Laurel and Hardy appeared in candy stripe costume, hollering, “roll up, roll up, the greatest show on earth is here!” Actually the feature film this year, “The Extraordinary Journey of the Fakir' is in many ways the embodiment of the Yubari, whose hero rises from the obscurity to worldwide fame through a fantasy like adventure.

Depending on connections, it is between 60 and 120 minutes to travel from Chitose Airport or Sapporo to Yubari by JR train, changing at Shin Yubari Station. Services are infrequent, so check the timetable first before making the journey, or consider hiring a car to get here. 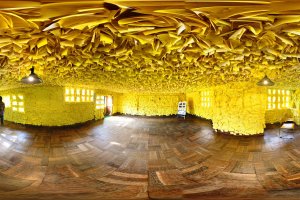 Novia Mardasari a year ago
That's why i never boring visit to Japan. Always have place to visit. Even small town but has good thing!
Reply Show all 0 replies

Yui Yamaguchi 3 years ago
Should support a small city like Yubari!
Reply Show all 1 replies

Bonson Lam Author 3 years ago
This, this has definitely help put Yubari on the map for keen travellers.
Reply

Bonson Lam Author 3 years ago
The word fantastic, is it aspirational or a nod to the city’s glorious past? Sometimes I wonder when I reflect on the name of this festival.

Cathy Cawood 3 years ago
Sounds like an interesting place!

Bonson Lam Author 3 years ago
Yes, and it is interesting that the city chose a film festival to revitalise itself. The cinema - bringing everyday stories to life, putting the fragility of existence under the microscope. The city of Yubari knows this too well, its scars from losing its firstborn, its industry that at one stage supported 100,000 people that called it home, people who gave their lives to build this city, a self sustaining world. These days this city where the deer outnumber the humans, there are scenes worthy of film, both inside and outside the cinema.
Reply

Kim 3 years ago
You know what I love about Japan? Even small towns always have something exciting or interesting happening - it's wonderful!
Reply Show all 1 replies

Bonson Lam Author 3 years ago
Thank you for your passion and excitement for the hidden corners of Japan, there is always something special, you just have to find it.
Reply
12 comments in total