An island rich in tradition and natural beauty

Awajishima (Awaji Island) is typically not on the regular tourist’s itinerary and only some would have heard of this place. However, in recent years, it has become a popular destination amongst cyclists who can tour the island in a couple of days. The island lies in the eastern part of the Seto Inland Sea between the main islands of Honshu and Shikoku. Some would also remember it as the epicentre of the 1995 Great Hanshin Earthquake (or Kobe Earthquake) which caused devastating damage to the Hyogo region.

Awajishima has a special place in Japanese history. According to Japanese mythology, it is the birthplace of Japan. This island is rich in tradition and culture. It also offers scenic views of a vast expanse of onion farms, flower fields and sandy beaches.

Here's where you should visit in Awajishima:

In Japanese mythology, Awajishima is known as the birthplace of Japan. It is said that the divine couple, Izanagi and Izanami descended from Heaven and created a series of islands, eventually forming Japan. The very first island created by them was Awaji Island.

The Izanagi Shrine is therefore dedicated to the divine creators and it is said to be Japan’s oldest shrine, holding a special place in Japanese history.

What was particularly striking in the park was an exposed section of the Nojima fault, whose movement triggered the destructive earthquake. The violent splitting of the ground was enough to show how powerful and destructive the quake was.

In the memorial museum, there was an earthquake simulator room which was set up like a living room, complete with cushy sofas, tables and cabinets. As the simulator was triggered, we experienced how violently the earth shook that day and for the same duration. It was, to say the least, frightening.

While earthquake museums remind us of the losses and devastation, they also highlight the need for disaster preparation, especially since Japan is such a geographically volatile region. The other earthquake simulator in the country is in Tokyo, which also conducts disaster preparedness courses for locals.

This huge flower garden, which occupies an area the size of 4 baseball stadiums, is one of the best flower viewing sites in Hyogo. It’s located on a hill, which offers visitors an amazing view of a vast expanse of colourful blooms set against the Osaka Bay in the background.

Awajishima is also known for the traditional performing art of Awaji Ningyo Joruri (Awaji Puppetry) which has a history of over 500 years. It has staged performances all around the world. Awaji Puppetry is known for its onstage quick-changes in costumes and sets as well as its beautiful puppet costumes.

While we did not manage to watch a full puppet show, our hosts arranged for a short demonstration and witnessed the level of skill, effort and thought that goes into executing every action made by the puppet.

I did not get to visit the Yumebutai while I was there but I later read about it and I think it's worth a visit. It is a complex of a conference centre, hotel and memorial designed by famous Japanese architect, Tadao Ando. It occupies the site where earth was excavated for reclamation in the Osaka Bay. The architect started this project prior to the earthquake and wanted to transform the land damaged by excavation into a park. However, the Hanshin earthquake struck before its completion and that previous plan was revised to building a memorial.

In the words of Tadao Ando, “Yumebutai commemorates death and devastation by celebrating their opposites – life and beauty”. A new addition to the plan was the beautiful Hyadudanen (100 Stepped Garden) where 100 colourful flower beds are arranged in square grids over several levels. 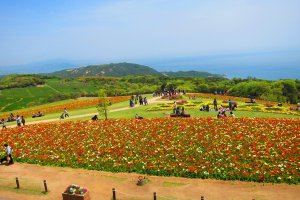 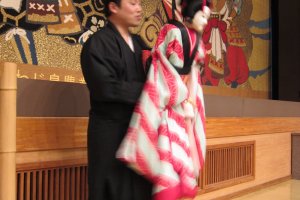 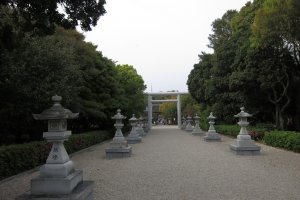 Kim 4 months ago
A beautiful place!
Reply Show all 0 replies

Victoria Vlisides 5 years ago
Nice write up. I love the Kobe area.
Reply Show all 1 replies

Odilia Sindy Okinawati 5 years ago
A new place has been share to traveler! Thanks
Reply Show all 0 replies
4 comments in total