Over a million sunflowers to enjoy in Hyogo

During summer, cheerful sunflowers grow in abundance in various places across Japan, and one great place to enjoy them in all their glory is at Hyogo's Nanko Sunflower Festival. From mid-July through to mid-August, around one and a half million sunflowers stand tall and proud for visitors to marvel at. There are also a host of sunflower-themed eats to try, including sunflower soft-serve ice cream.

Be sure to check the official website before attending, as the festival dates can fluctuate slightly each year depending on the blooming conditions. The exact dates are typically confirmed closer to the event's commencement.

The Nanko Sunflower Festival is located around the Nanko Sports Park area. It can be accessed in around 25 minutes on foot from the JR Harima Tokusa Station. Shuttle buses are also usually available during the blooming season.

Alternatively, for those who plan to drive to the event, it’s about an hour and a half from central Kobe, or about 50 minutes from the Himeji area. On-site parking is available. 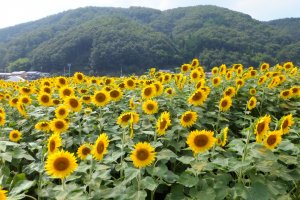 Elena Lisina 5 months ago
In Russian sunflower grow only in the South, here summer is too short and they can't give seeds. Being a student we went to the South to work at the apple farm and I saw sunflower fields only there, in my whole lifetime.
Reply Show all 0 replies
1 comment in total