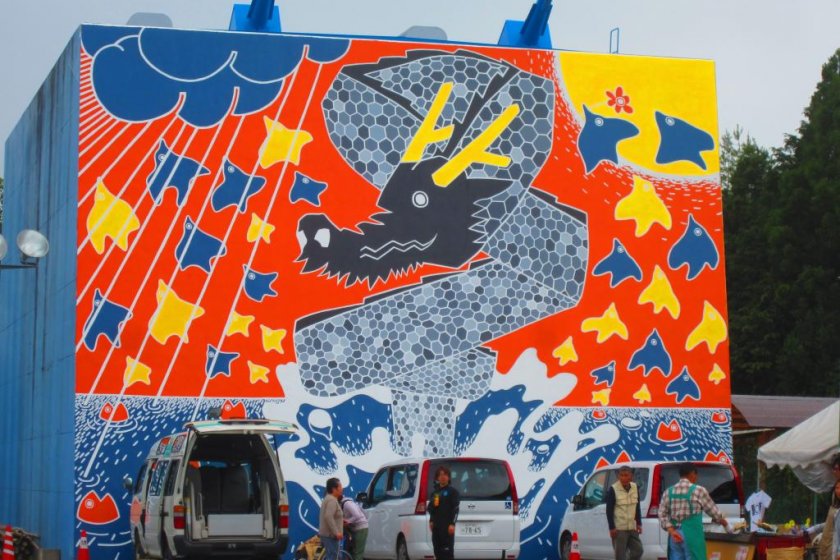 Hidden in the hills of Hitachiota is a massive sleeping dragon and its many earth-bound children. Famous as one of the longest suspension bridges in Japan, the Ryujin Gorge Suspension Bridge offers a local cultural highlight and breathtaking views of the region from atop its 375 meter span, and is definitely worth the trip for its seasonal events.

The Ryujin (dragon-god) Gorge gets its name from the legends written about a dragon living within it, but as an interesting counterpoint the river dividing it is so twisted and undulating that it appears from the air as a giant coiled dragon itself. From these two intersecting threads came the dragon theme that was used to design and advertise the giant suspension bridge that has become the area’s largest attraction.

Originally built in 1994 as a tourist destination, the bridge itself features two tall stylized supports in a vivid blue, whose shape and aspect resemble the angular, spiky body of a reptilian creature. From afar the twin peaks of the structure could also be seen as the hips and shoulders of an elongated dragon stretched across the gap between the hills.

Though the bridge is capable of handling the weight of a car in an emergency situation, it is solely for pedestrian use and can accommodate up to 3500 people at one time. The main attraction, however, is the view of the green hills fading into the distance and the intricately woven river below. From the main entrance one can cross over to reach hiking trails leading either down into the gorge below or off to the other side of the hills, making for a full day excursion for the outdoor type.

There are also many decorative murals and statues featuring dragons, as well as food and drink amenities at the entrance end. Delicious raspberry ice cream or salted roast fish are some of the highlights available for those who want to eat outside. The opposite end of the bridge also features a small gazebo with a carillon inside; if you pay 100 yen you can choose whether to hear the ‘bell of hope’ or ‘bell of dreams’ theme, and receive a small commemorative picture card. For romantics there is the option to elect for the ‘bell of love’, but for this to work both of you have to press the button at the same time on opposite ends of the bridge!

Like most tourist destinations in Japan this bridge has an event for each season to give even more incentive to visit. Late April and May feature the koi nobori festival, a Japanese tradition where carp-shaped streamers are hung to celebrate the male children in a household. The Ryujin bridge takes this concept to new heights (literally!) by stringing two long cables of these streamers along both sides, framing the bridge with the colorful flapping fish. Originally these cables were set up by having two people climb down opposite sides of the gorge and tie their ropes in the middle, then pulling the cables across; more recently they pass the cables outside the support struts of the bridge to make it less arduous. This tradition has been celebrated here long before the bridge was even built; in fact, the cables were originally strung across to announce the bridge’s proposed construction, and someone has the idea of adding the carp-streamers, leading to the custom we see today.

Summer brings a different set of thrills, with hundreds of candle lanterns adorning the bridge and the sound of wind chimes filling the air during the third week of August, while autumn is renowned for the gorgeous fall colors of the leaves on the hills surrounding the bridge. Winter features the Suifu Soba Festival, a chance to enjoy the freshly harvested local delicacy, and once or twice a year one can see the bridge covered in delicate snow or frost.

The approach to the bridge is dotted with little soba shops and parking lots, and children will love the plexiglass viewing windows in the floor of the bridge that allow you to see straight down the 100 meter drop to the river below. Public transportation is not quite as convenient as one could wish for, but there are buses roughly once an hour from Hitachiota Station on the Suigun Line and it is a relatively easy twenty minute walk up the hill from the Ryujin Suspension Bridge stop. The site is closed during heavy winds or thunderstorms, but is otherwise open all year round, so there is always a good time to visit Ibaraki’s northern dragons. 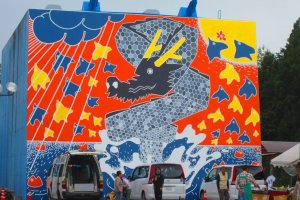 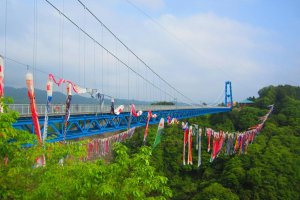 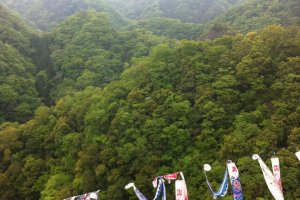