The Kitakami River Rubber Boat race is an annual event held on the 4th Sunday of July in Morioka, Iwate. The race starts just below the Shijuushida Dam (四十四ダーム), and ends at the Kaiun Bridge (開運橋) in front of Morioka Station. The participants end the journey at the Minami Ohashi (南大橋). Every year over 500 teams participate in that thrilling event, making it the biggest rubber boat race in Japan and one of the biggest in the world.

There are 2 categories, timed race and pleasure, the racers start first and the pleasure boats go last so as to not impede the race participants. All participants gather under the Minami Ohashi (南大橋) from around 6:00 in the morning, many people camp there overnight to be ready early. On normal days, camping isn't allowed at the site. It's good to get there early to get a good spot near the river, the ground under the bridge turns into a huge barbecue party after the race.

After registration, all participants are taken to the Shijuushida Dam by bus. The teams start by groups of 50 at 5 minutes intervals from 9:00 AM. It takes about 2 hours for all participants to start. The site at the dam is too small to accommodate all participants at once, hence the gradual start. You have to carry your inflatable boat, oars, life Jackets and anything else that you might need during the race. It's a good idea to bring water, the course is just under 10 kilometers long. You should wear long sleeves or some good sunblock to avoid sunburn, this year most of the time it was cloudy. Once you start, you have to go to the end. The average participants take about an hour to complete the course.

The race itself varies from year to year depending on the water lever. It's much easier if the water is high but also faster. Low level water makes for a very treacherous race, due to the high rock hazard. There are 2 tricky passes, the first one after about 3-4 kilometers, where the river is much faster and turbulent and the last one after the goal mark. As you pass under Meiji Bashi (明治橋) there is a drop of about 2 meters, so be prepared. 2017 was the only time that the race was cancelled in 41 years due to torrential downpour. The parking area at Minami Ohashi was under almost 1 meter of water. The river changes significantly as we go down with parts slow moving, others fast moving with lots of rocks. If you carry any electronic equipment make sure it's secured and waterproof. The possibility of going overboard is quite high.

You can find more info about the race at the following link, in Japanese only; http://www.kawakudari-morioka.jp/

You'll pass under several bridges along the way, each one of them is loaded with people cheering the participants on. You can also rent a boat if you don't have one, you can find a link on the event home page.

Attached oars make for a much faster race but most people just sit on opposite sides of the boat and row.

The start and end point is located under the Minami Ohashi, just off Route 4 about 2 kilometers from Morioka Station. It's possible to get there on foot but since you have to carry all your equipment, it's better to go there by car. Remember too that it's a good idea to have a Barbecue after the race, there is a real festive atmosphere the whole day, it's not a serious race. Go and enjoy the day! 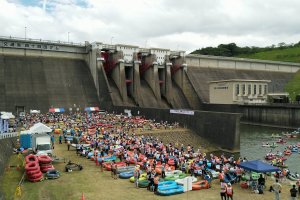 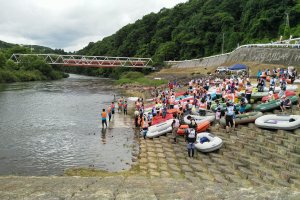 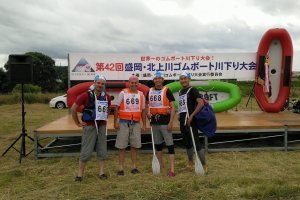 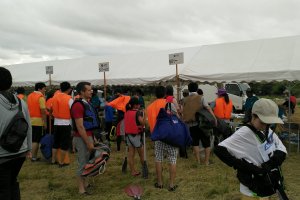 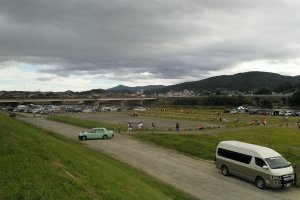 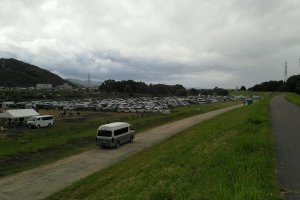 Kim 2 years ago
This looks like such a unique (and fun!) event!
Reply Show all 1 replies

Malcome Larcens Author 2 years ago
Every year, for my first 5 years in Japan, I wanted to participate in it so badly but always missed the deadline for registration. It's so much fun.