Ritual and serendipity in the heart of Morioka

Street view of the shrine during the cherry blossom. (Photo: yisris)

Morioka is the capital of Iwate Prefecture and a self proclaimed castle town of the north. The problem is there is no castle to be found. The Morioka Castle Site Park (formerly Iwate Park) however, does have a few castle wall remains left intact and nice scenery that begs for a stroll. Like many larger parks in Japan, you can find a shrine. On the outer edge of the park along a busy street is Sakurayama Shrine. Just a twenty minute walk from Morioka Station, the centrally located shrine is easily accessible and an easy side trip from nearby attractions.

The Sakurayama Shrine is a well-kept, rather lively shrine that has a few extras you won’t see at other shrines. Of course the first step to entering a shrine area is to purify your body and spirit. A sign with pictures and numbered steps clearly illustrate how to pour chilly water over your hands then into your mouth. This symbolically cleanses any bad things you have touched or said. Walk up a few steps and you call upon the gods with a prayer of your own. Don’t forget to ring the bell and offer a donation. You’ll notice that this shrine is fairly busy, being right across the street from shopping and eateries. Being over a hundred years old has also gained it a reputation among locals, so this is their first stop when they need any special services.

The shrine itself offers a number of services for the community, most of which involve a mandatory donation. An almost must for all parents with newborns is for the parents to take their children to a shrine to purify them against the evils of life (diseases, bad influences, etc.). A priest can also perform a ground-breaking or completion ceremony at a construction site. After living in Japan, you begin to see that many Japanese are spiritual or superstitious when it comes to things such as good or bad luck. Sakurayama, like other shrines, sells charms that will help you with anything from safe overseas travels to passing a difficult school exam. Sakurayama takes it a step beyond by offering to purify a newly purchased car to ensure traffic safety. This ritual involves the priest chanting and waving a pole with white streamers over the vehicle several times to encourage the gods to protect the vehicle, its drivers, and any passengers.

A highlight of shrine is what is hiding in its backyard. A small trail to the right of the shrine leads through a simple garden area with stone lanterns. Then you see it. Staring at you from 20 feet above (6 meters) is a massive rock. White paper thunderbolts are tied on a rope and drape the rock. These sacred ropes are found everywhere in Japan at shrines, on trees, or any building or natural wonder that is considered holy. The rock most certainly holds the spirit of a deity. As you gaze at the rock you can’t help but trying to comprehend its unique shape and size. Its triangular figure is said to represent the helmet of a samurai. It’s a perfect symbol of spiritual protection to the shrine and Morioka’s people. 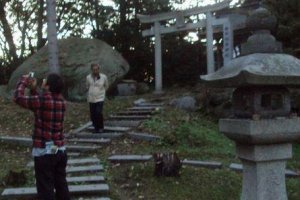 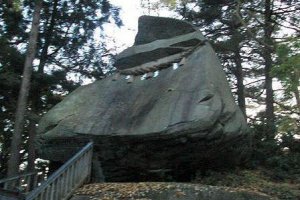