A modern monument to a well-known missionary

On August 15th, 1549, the Spanish missionary Francis Xavier landed on the shores of Kagoshima city. His goal was to bring Christianity to Japan and Kagoshima was the only port in Kyushu that permitted the proselytizer to land. He spent a year in Kagoshima, aided in his mission by a Kagoshima native named Anjiro, who is credited as becoming the first official Japanese Christian (known by the name Paul of Santa Fe).

Xavier's mission was to be short-lived. When the local lord forbade his subjects to convert to the new religion, Xavier moved on, eventually leaving Japan after just a few years. But Kyushu remained a bastion of Christianity in Japan, even through the years of persecution by the shogun's government. In 1908, a church - Japan's first stone church, actually - was constructed in the city to pay homage to Xavier's efforts.

Sadly, the historic church was destroyed in a bombing raid during the war but a new wooden building was built in 1949 to commemorate the 400th anniversary of Xavier's arrival. This church was replaced once more in 1999, on the occasion of the 450th anniversary. The newest incarnation is wholly modern, but has stunning stain glass windows in the interior. An impressive pipe organ stands at the back of the nave and the side chapel holds a small relic of the vaunted saint himself.

In the basement, a small museum showcases artifacts from the life of St Francis as well as items pertaining to the general history of Christianity in Japan. The display includes a letter written by Xavier himself as well as the relief of Mary and Jesus that Christians were often made to stomp on to prove to that they had no part in this "forbidden" religion.

A visit to the cathedral and museum can wholly depend on who the volunteer guide is on staff that day. For my visit, I was lucky enough to have a 90-year-old retired science professor who was fluent in English and had extensive knowledge of the city's Christian history. As the on-site museum has only a few English descriptions, he was able to breathe life into the exhibits and make them meaningful for my group of travelers. It pays to stop by the guide stand outside to see if an English speaker is on duty that day.

The Cathedral of St Francis Xavier is easily reached via the Kagoshima City View Bus. The bus stops right outside the church and the park with its memorial plaques and sculptures is just across the street. 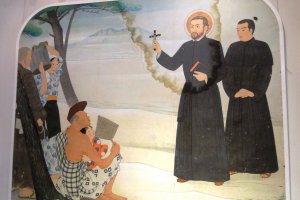 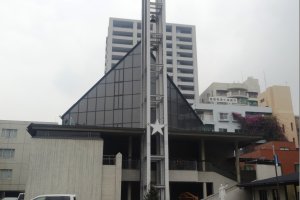 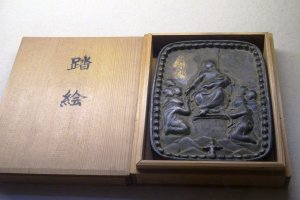