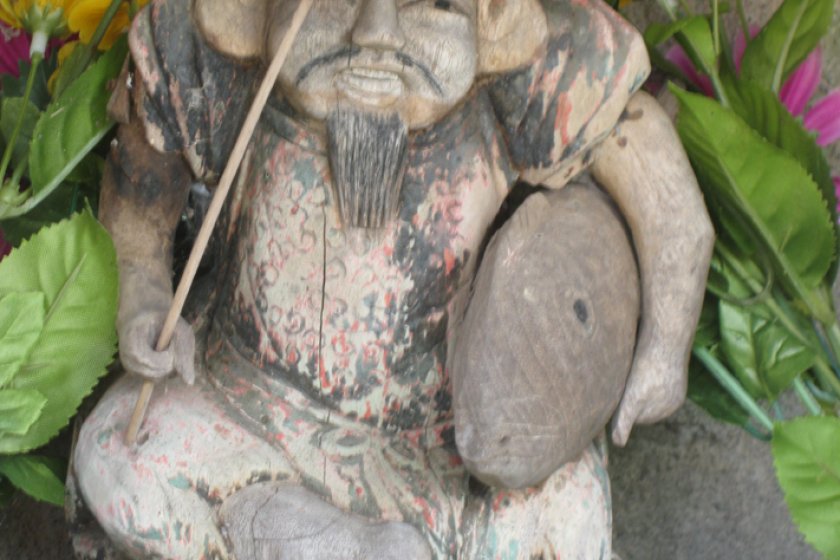 Looking for this humble God on Yakushima Island.

Ebisu is my favorite brand of beer. Gold, white, and dark brews—to me they’re all dear. The logo on its bottle: a fat smiling fisherman wearing a tall conical hat; his right hand clutching a fishing rod and its left holding an equally fat and smiling red tai (sea bream). This is Yebisu/Ebisu One. Ebisu Two is Ebisu Station in Tokyo, on the Yamanote Line. Right across from there is Ebisu Three: Yebisu Beer Museum. Until I flew to Yakushima in Kagoshima, Prefecture this summer, I didn’t know there were more Ebisu. I never thought Ebisu was a god who people pray to and not just a brand of beer.

Last September, I went and searched for this humble god with my friend Kuma-san. From Kagoshima Port, by a high-speed ferry, we arrived at the port of Miyanoura on a stormy afternoon. It took us about three hours. After our first dinner of grilled flying fish and variations of flying fish dishes at a local restaurant, we started our search for Ebisu. We walked through back streets and intruded into narrow paths. Our guidebook had some pictures of Ebisu in it but didn't mention any specific locations. It was probably because, I thought, Ebisu is not a giant god as the Great Buddha in Kamakura. Ebisu is a small god for fisher-folks. Of course it was foolish of us to be searching for a god in the middle of the night.

The next day, we took a bus to Issou, the neighboring town. There were very few people on the road who you could ask for directions or anything. We loafed around empty streets the whole day and met some mournful cats and passed by some elderly men chatting under the banyan trees. But Ebisu was nowhere to be found.

We took another bus to Ambo on the eastern side of the island on our third day. We headed to a shrine. There was no one there but tall handsome banyan trees. There was a god in the altar but it didn’t seem like Ebisu. We wandered around and found another jinja on top of a hill. This place of worship was literally abandoned. It looked as if looters had ransacked it. There was nothing inside but a small offertory-box with a few moldy coins in it.

Just before sunset, we returned to Miyanoura Port and walked to the shrine behind the seawall. There were still cicadas singing at the top of their voices when we arrived. Kuma-san paid his respects: he bowed and uttered a short prayer. Ebisu's shadow was nowhere to be seen.

After climbing several mountains on our last day, we decided to rent a car. We vowed not to leave the sacred island without finding Ebisu. From Ambo, we drove west and often stopped at many viewing spots. There were hardly any cars except a few fellow tourists driving the same Kie-type mini-cars and appreciating the same bewildered wild monkeys on the road. We passed through the breathtaking Seibu Rindoh (Western Forest Road). Shortly, we spotted a lighthouse at the tip of an elongated cliff. This particular structure was never mentioned in our guidebook (outdoor gear was more important). For a few minutes, we drove through a narrow path and reached Yakushima Lighthouse (Yakushima Toudai). There was not a single human soul around. But I saw droppings of wild deer near a marker. The sky was blue and the mountains and the sea were just astonishing to behold! Kuma-san and I made our way through the open gate. While Kuma-san was taking pictures, I explored the surroundings. On top of the massive concrete wall protecting the lighthouse, I trod carefully like a thief towards the back. Directly behind the lighthouse, I was blocked by a sticking-up slab of concrete that looked like the roof of a shed. Strangely, there were makeshift concrete stairs beside it. I read it as a sign of invitation to come down. Politely, I accepted it. What I saw made the hair on my arms stand on end. I waved at Kuma-san to come near. When he saw what I saw, we laughed loudly in silence. We were so delighted but we didn’t want to create any noise: Ebisu, the god of fishing, the humble wooden deity of fishermen, was quietly looking out at the vast and calm Pacific Ocean.

“Blessed are those who do not seek,” I said. “For they shall find it.” “Funny,” Kuma-san said. “I didn’t expect to find Ebisu hiding here.”

Invigorated by our discovery, we continued the drive to Issou. We slowly stirred through the other side of the town where we didn’t go the first day. This time, the guidebook was right. We found three more Ebisu, one of the seven gods of fortune.

I have a little garden: slightly bigger than the forehead of a cat. I grow herbs: parsley, sage, rosemary, and thyme, and mint, and lemon grass, and lavender, and basil. Occasionally, I cook for myself. Sometimes, my Japanese wife and my daughter like my cooking. I come from the Philippines – it is said that there are more than seven thousand islands but I do not own one. I’d love to, though. I always carry a camera with me – in my walks, journeys, and wanderings. Most of the time, I’m home – staring at Fujisan and writing something. 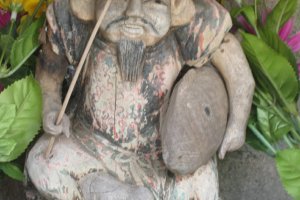 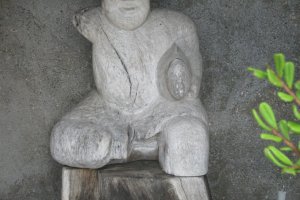 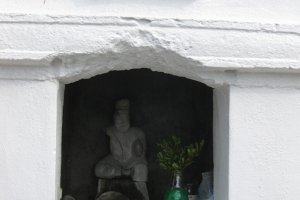 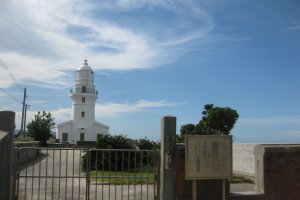 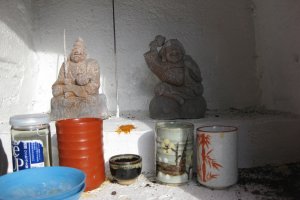 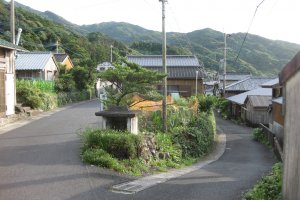