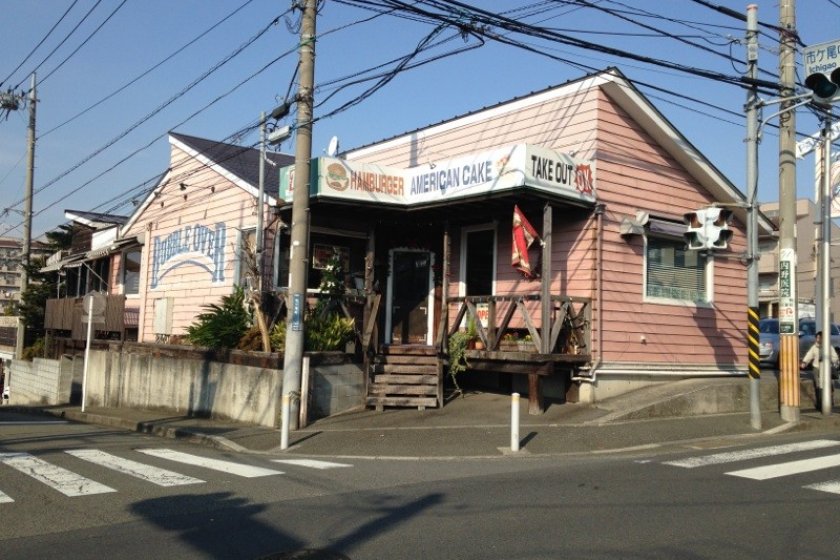 The Bubble Over Cafe, exterior

Had I finally found it? A magical doorway that would transport me instantaneously back to the States? This was the first thought that went through my mind as I entered the Bubble Over cafe. As I cast my eyes around the wood-paneled dining area, I saw checkered oilcloth tablecloths, American license plates, and Eagles posters...but what I didn’t see was any obvious sign that I was still in Japan. My only clues were the faces of the customers and - if I looked closely - the yen symbol on the menus and signs that were otherwise all in English.

Owner Katsuaki “Kats” Samejima created this place, and two others under the “Mother Lucy” umbrella (American Restaurant Troubadour and Lucy’s Bakery), to share his passion for American cooking, especially homemade cakes and pies. Enthralled with rock music at first, he visited California for the first time in 1980, and since then has made two or three pilgrimages to the States every year. He reminisces fondly about his time there, especially the culinary discoveries he made on his journey into the heartland: “The deeper into the country you go, the more unexpected things you find. Especially breakfasts! I love American breakfasts!”

Bubble Over doesn't serve breakfast, but lunch certainly succeeded in making me forget which country I was in. After my first bite of the clam chowder, I looked out the window and half expected to see Atlantic waves breaking on the rocky shore of my New England home. The staff’s recommended “One Dish Plate” took me to the Southwest: a hamburger steak served with Mexican rice and topped with bacon, egg, and chili that was probably modulated for Japanese tastes but still had an attitude. (A milder version with demiglace sauce and plain rice is available for more timid tongues.) And the Oreo cake, which we selected from the dessert tray after intense deliberation, reminded us of the brownies beloved everywhere from Kodiak to Key West.

The Mother Lucy restaurants are also a prime spot for celebrating American holidays. Halloween, Thanksgiving and Christmas, naturally, as well as some less well-known in Japan like New Orleans Mardi Gras, and occasional live concerts. Details can be found on the “schedule” page of their website.

Bubble Over is most easily accessible by car, but diners coming by train can work up an appetite with a 15-minute walk from Ichigao Station on the Tokyu line. Lunch sets (featuring hamburgers, pulled pork sandwiches, soft tacos, and other offerings) range from ¥1300-¥1500. A soft drink is included (with free refills for tea or coffee). The dinner menu has a wide selection of appetizers, chicken and steak dishes, hamburgers, and Tex-Mex dishes, generally in the ¥1000-¥2000 range (¥4300 if you want to splurge on a 16-ounce steak with all the trimmings).

The down-home American atmosphere and menus in English aren’t always a guarantee of English-speaking staff. An American server is on duty during the day on Fridays; otherwise it’s hit or miss. But all the staff know enough to take orders and explain the menu, and Kats extends a warm welcome to customers from all over the English-speaking world...with a postscript: “If there are any special expressions they use in your area, please teach us! We’ll be very happy!”

I first came to Japan as a student, and haven't been able to stay away since. 15 years and counting, first in the Kansai region, then three frozen years in Aomori prefecture, and the rest in Kanagawa. I enjoy writing, exploring hidden corners of Japan, and combining the two! 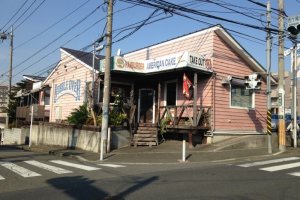 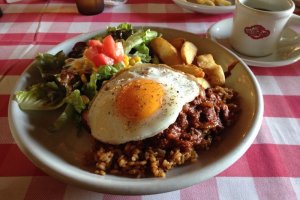 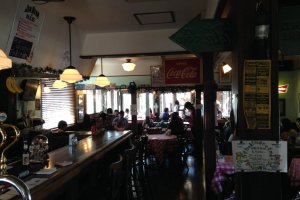