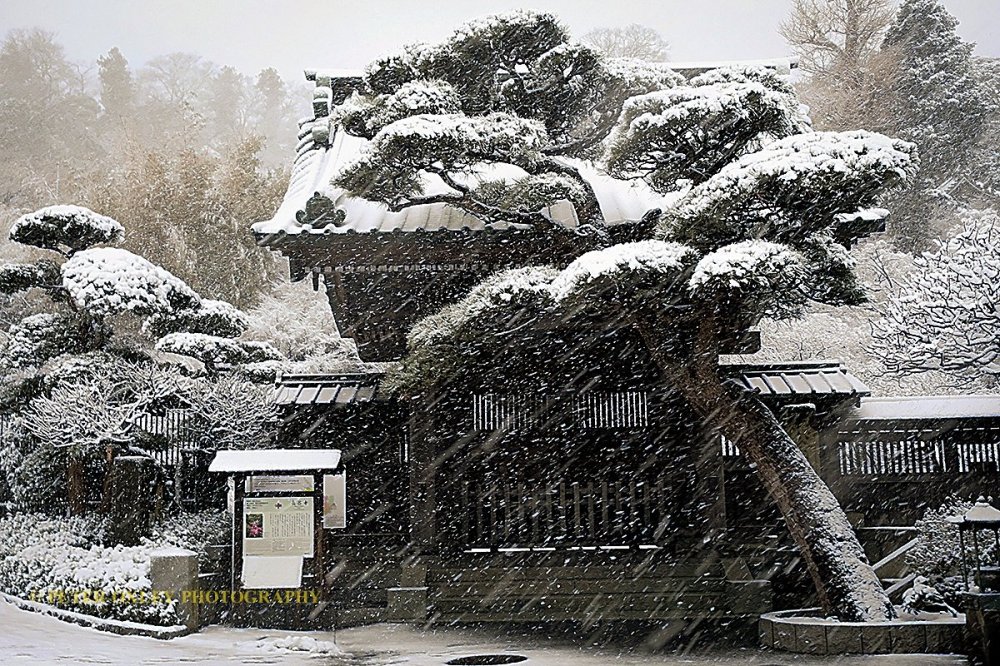 The main gate to the temple in a winter snowstorm. 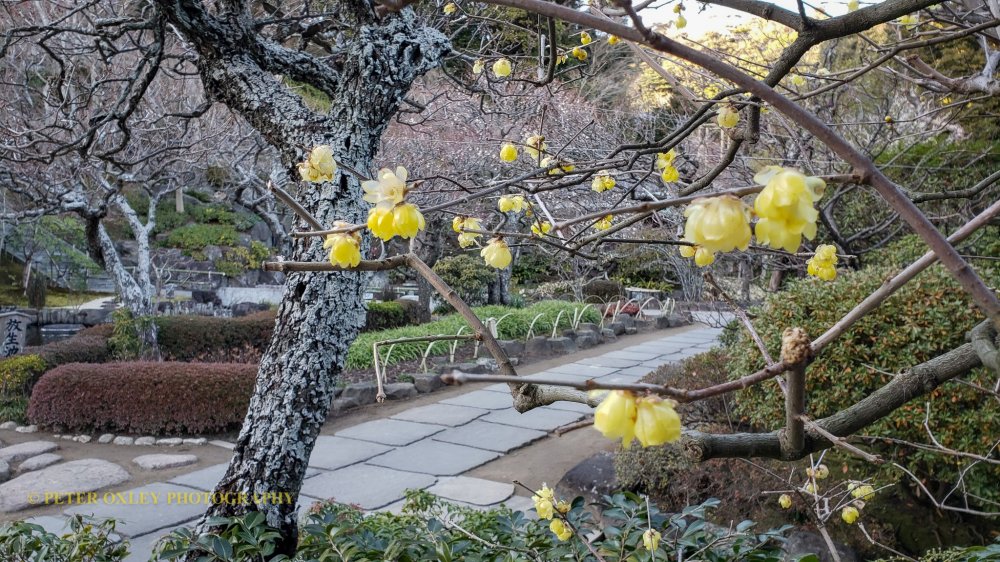 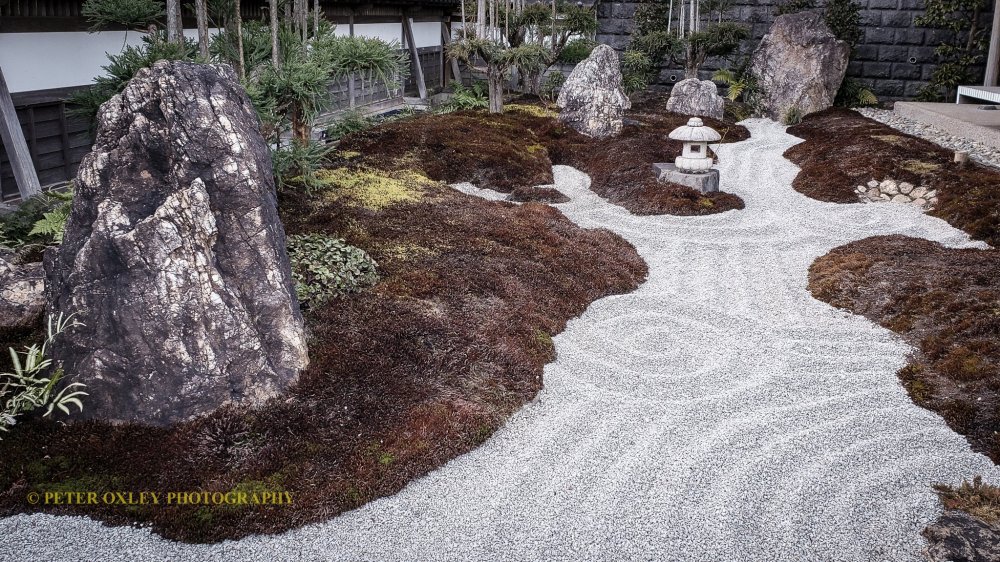 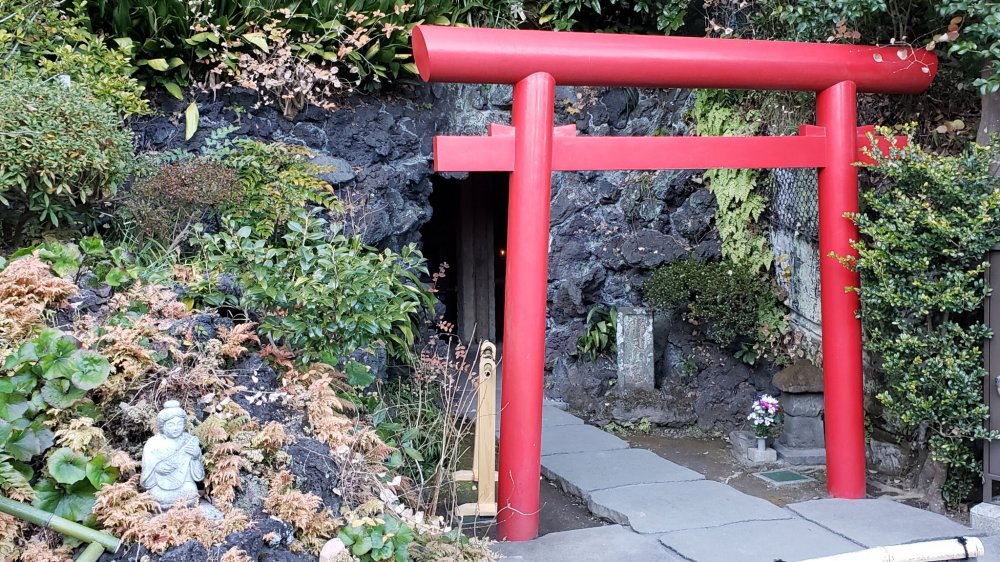 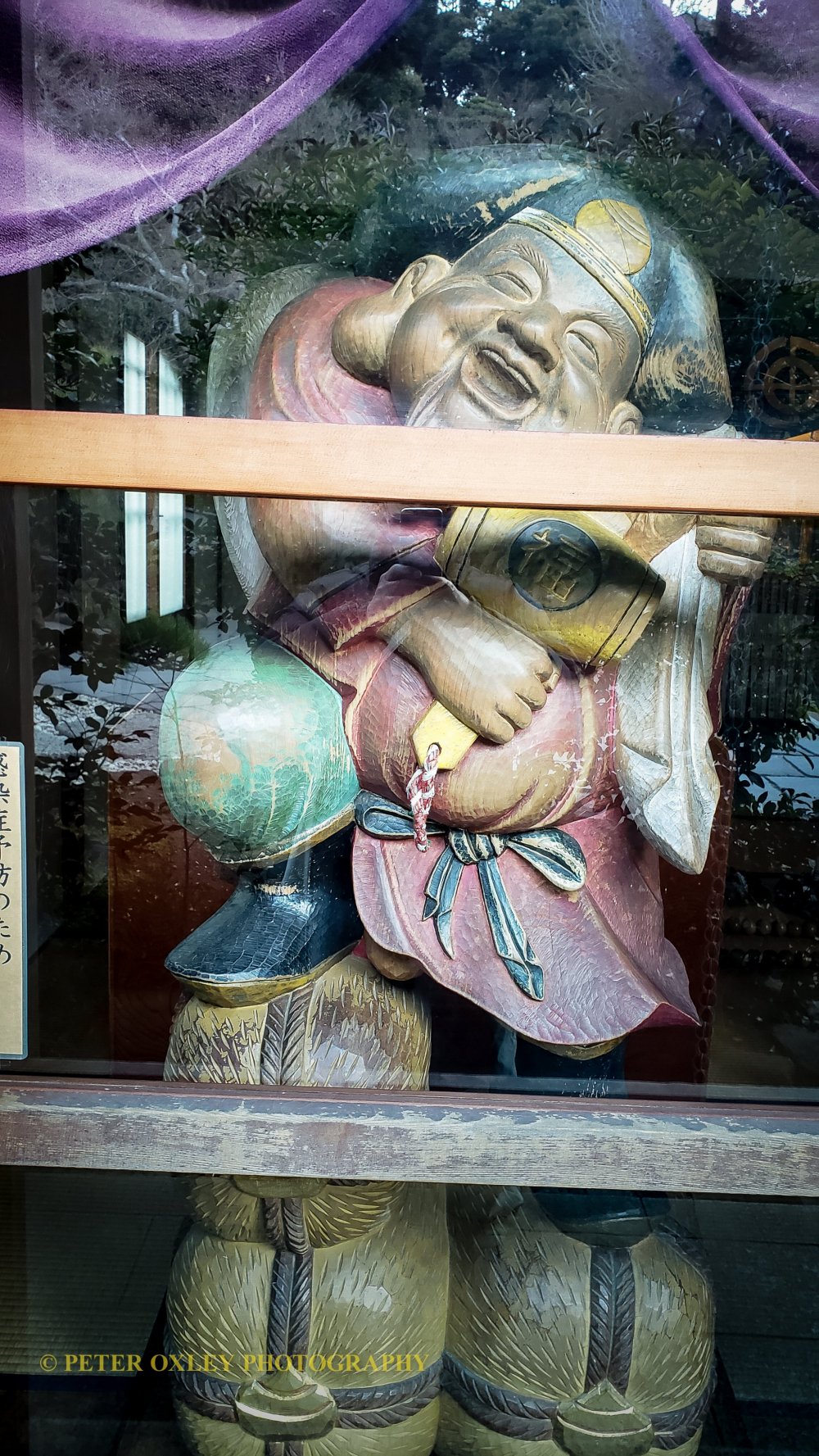 Daikokuten under lockdown during the pandemic (no touching allowed!). 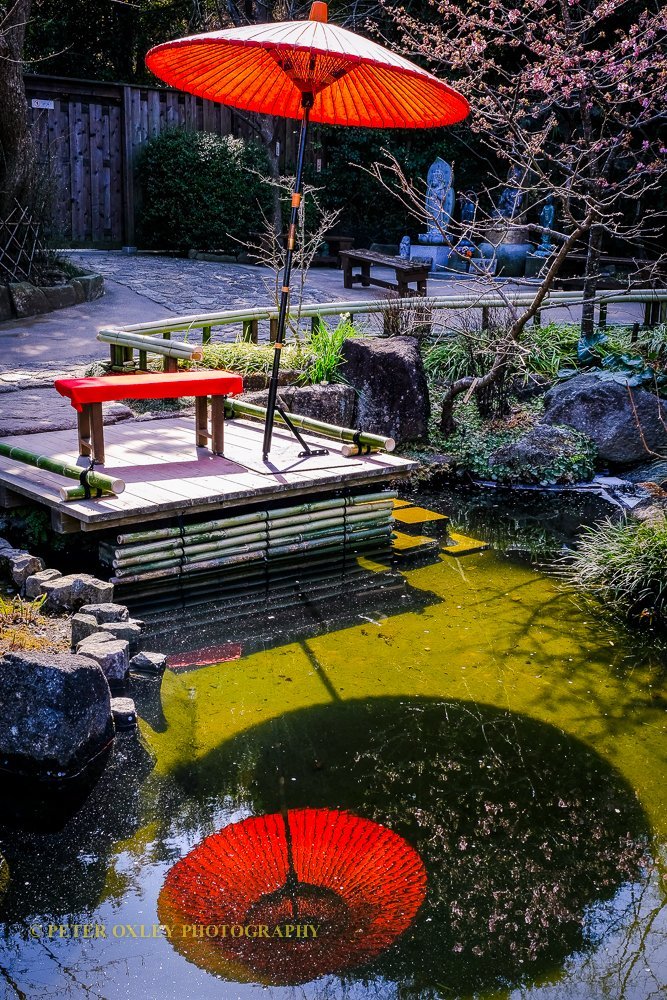 Selfie spot for young lovers, and others. 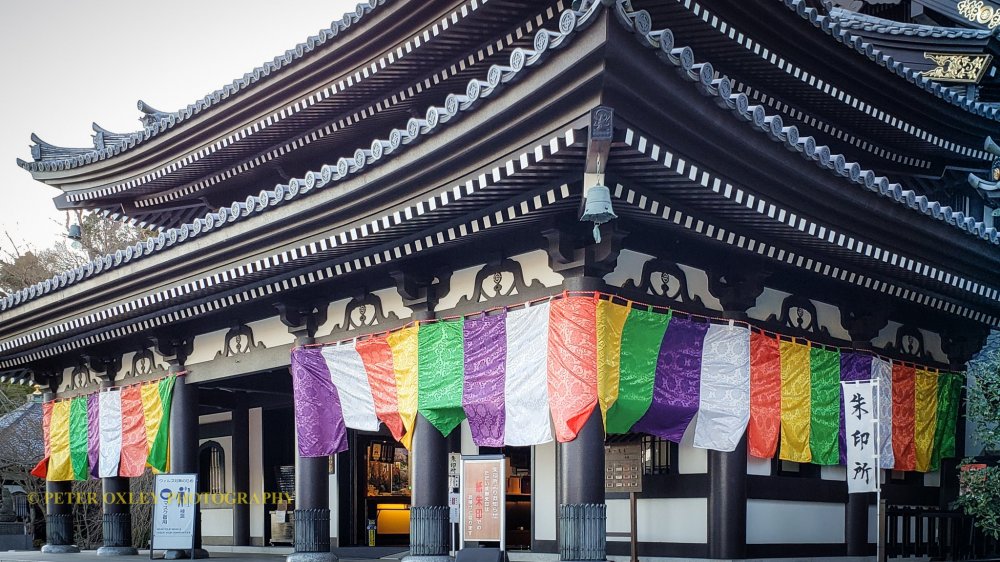 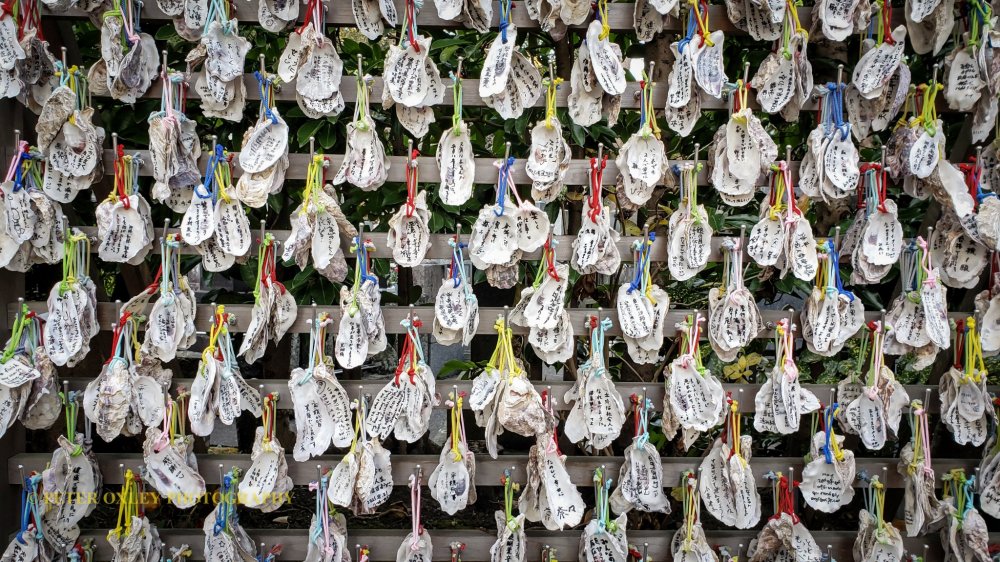 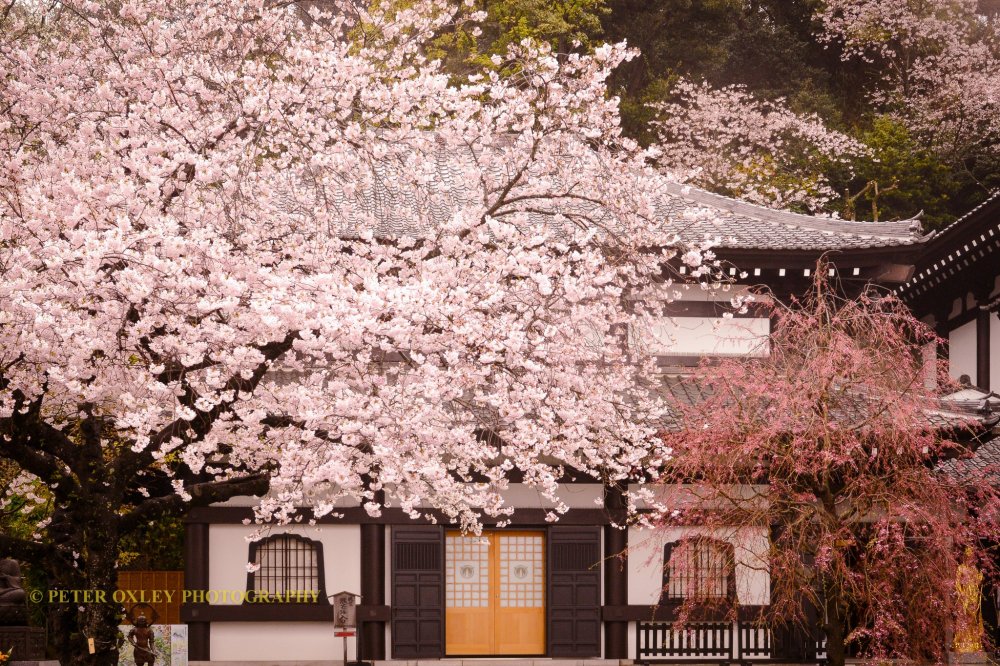 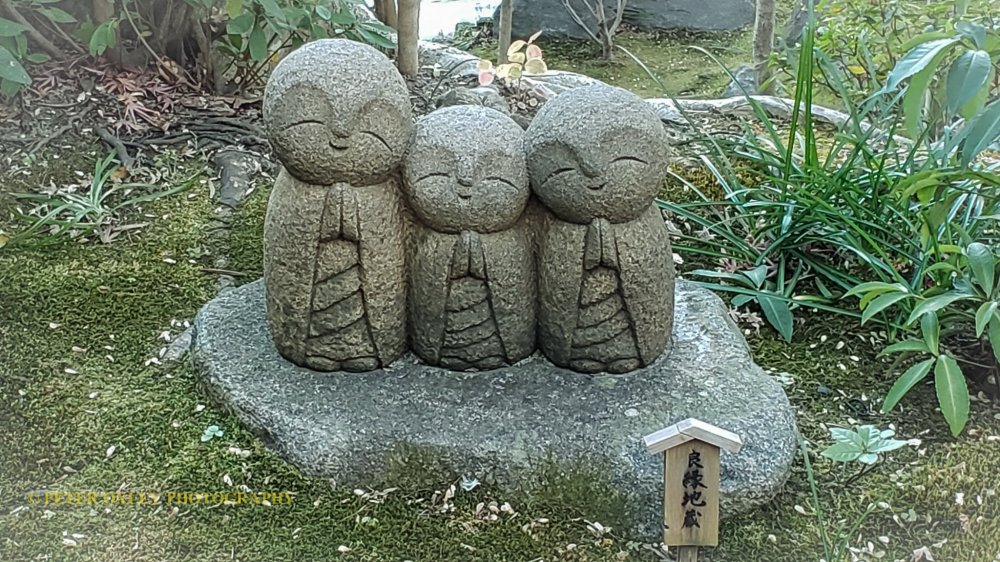 A group of three jizos amongst hundreds. 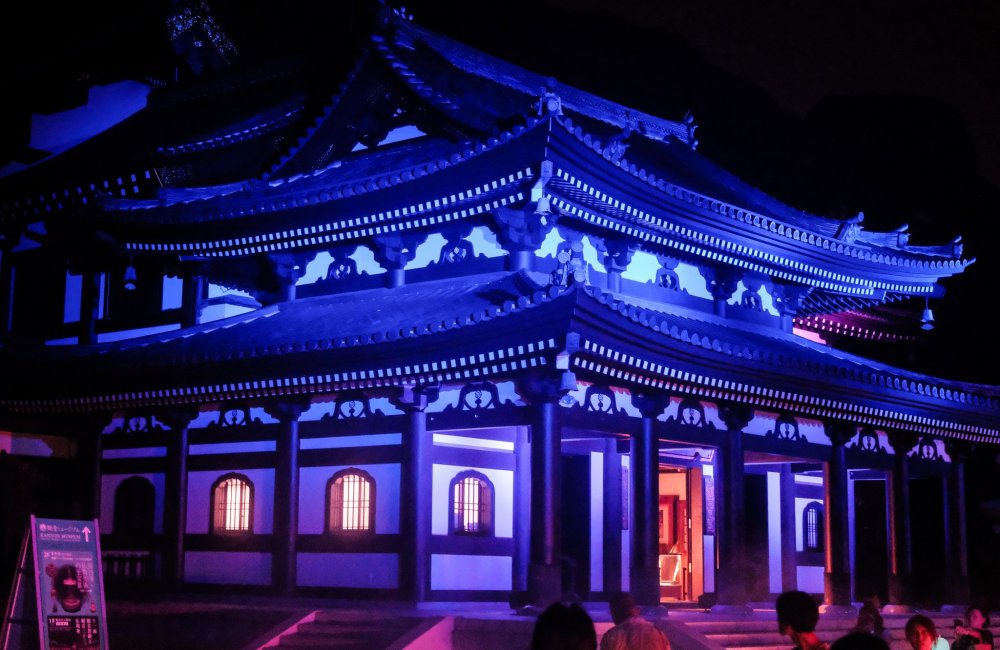 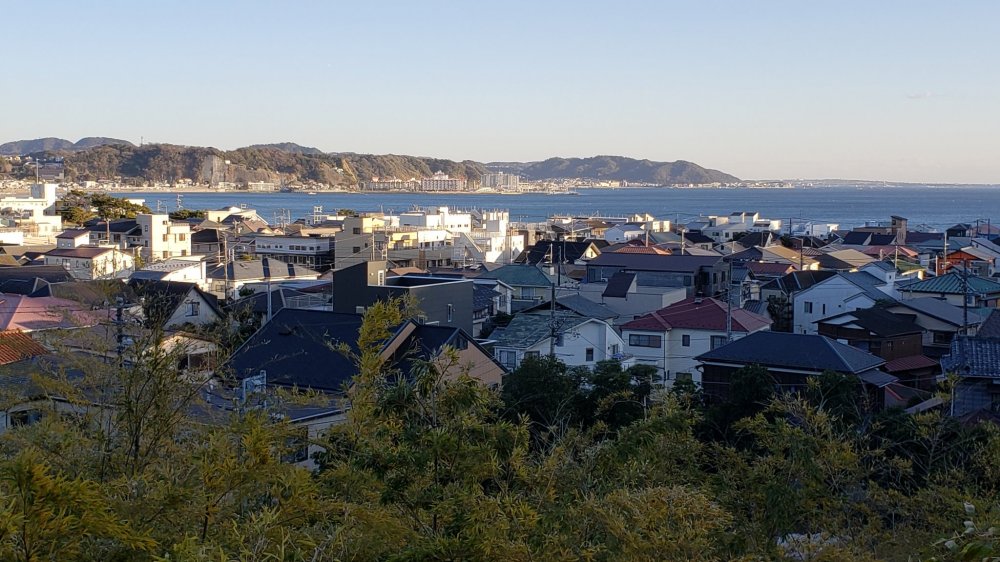 Panoramic view of Sagami Bay from the observation platform. 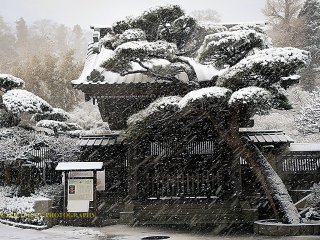 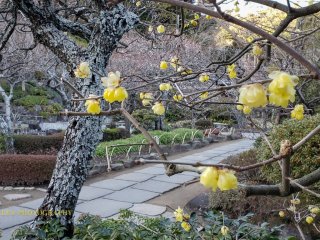 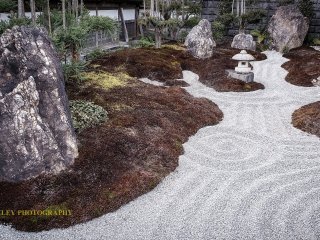 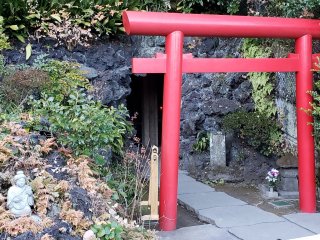 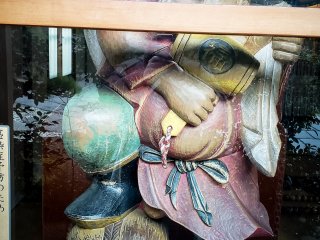 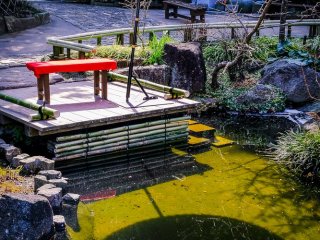 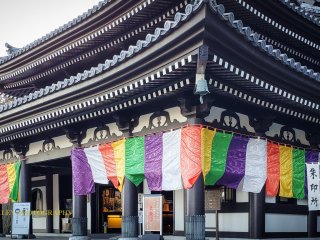 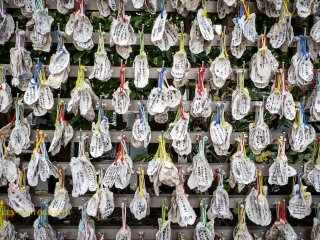 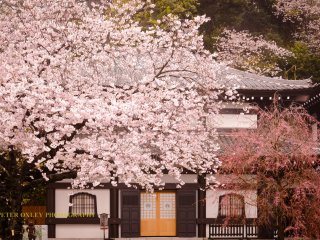 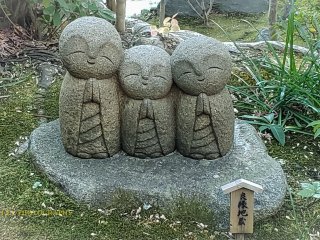 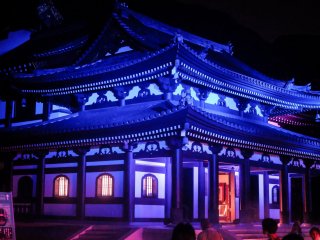 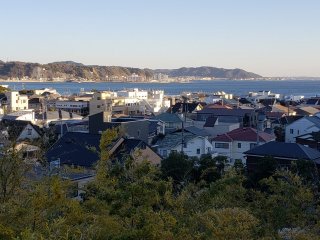 One of my favorite venues in Kamakura, and one of the three must-sees along with Tsurugaoka Hachimangu Shrine and the Great Buddha, is Hasedera Temple, located on the western periphery of the crescent-shaped range of hills that loosely defines the boundary of what was Japan's de facto capital from 1185-1333 under the Kamakura Shogunate.

The very essence of the temple’s existence presents an interesting story, rising from a sculpture by the monk, Tokudo, who carved two huge statues of Kannon, the god/goddess of mercy and compassion, from a single camphor tree way back in the eighth century. One of the statues was installed at Hase Temple in Nara in 721 and the other, a 30-foot 11-headed replica was set adrift in the sea to find a place with which it had a karmic connection. Such was the euphoria over the statue’s reappearance 15 years later, when it washed ashore on the Miura Peninsula, that it was immediately taken to Kamakura where a temple was built in 736 to house and to honor the god.

A mystery within an enigma.

A widely revered bosatsu, the Japanese word for bodhisattva, Kannon evolved from an entirely female figure in China called Guanyin. Prior to that, the god was considered male. In Japan, however, Kannon is portrayed as either distinctly female or androgynous, and is believed to take on as many as 33 different manifestations. Ten of the eleven faces depicted in the version installed here are said to represent the different stages attained on the path to enlightenment. If you look closely, you may notice a moustache on the Hasedera Kannon, so the confusion continues. However, according to scholars, this adornment was intentional and meant to deliberately emphasise the absence of sexual identity.

There’s a lot to see and do at Hasedera.

The temple complex stretches out over four levels: gardens, ponds, and caves at ground level; hundreds of small statues known as jizos halfway up the stairs, dedicated to the souls of children lost through miscarriage, stillbirth, or abortion; the main temple, a museum, the bell tower, and a prayer repository on the upper level; and beyond, the Prospect Walkway resplendent with hedges of blue and pink hydrangeas in the summer months, and a year-round panoramic view of Sagami Bay.

Some of the key points to look out for besides the main attraction, the magnificent statue of Kannon in the main hall, are the sand and pebble garden designed in the style of a Zen garden; the caves featuring an array of different statues representing avatars of Benzaiten, the sea goddess and one of the seven gods of fortune; and standing on a bale of rice and wielding a mallet, a wood sculpture of Daikokuten, the god of agriculture, prosperity, and commerce . You can rub his head for your own good luck!

Indeed, the temple itself offers an interactive experience in that visitors can twirl the prayer wheels at the sutra archive (Kyozo) for instant good fortune, pour water on a buddha’s head, and write prayers on oyster shells for the gods to bless. It is said that oysters were instrumental in guiding the seaborne statue to where it is today.

Giant carp (koi) glide gracefully in the ponds, while all around are beautifully tended gardens reflecting the abundance of the seasons. Throughout the year there are flowering trees and shrubs on display: among them, plum (ume) in February, cherry blossoms (sakura) and peony (botan) in March and April, wisteria (fuji) in May, hydrangeas (ajisai) in June, crepe myrtle (saru suberi) in August/September, and the glorious reds and yellows of the momiji and ginkgo trees in the autumn months of November through December.

Very much a community temple, various events take place throughout the year.

To mention a few, there is a ceremony to welcome in the new year (Hatsumode) with thousands of votive candles laid out on the ground in concentric circles as in a mandala; the Buddha’s birthday, celebrated in Japan on the 8th of April; and the O-bon Festival in the summer when the buildings are illuminated and visitors walk around with lanterns to help departed souls here on a visit find their way back to the otherworld.

Hasedera is an important part of Japan's historical and cultural heritage, dating back more than 1,300 years but blending seamlessly into the fabric of modern-day society. A visit to the temple offers the visitor an invaluable insight into Japan’s history as well as a fun day out. Enjoy!

Take a bus from the east exit of JR Kamakura Station or by travelling three stops on the Enoshima Electric Railway, better known as the Enoden-sen.

Elizabeth S 3 months ago
Hasedera has so much packed into a small site yet it doesn't feel crowded. The gardeners and architects were geniuses.
Reply Show all 0 replies

Kim 3 months ago
The first photo looks like a painting!
Reply Show all 2 replies

Peter Oxley Photographer 3 months ago
Photo was taken with my Fuji XT-2, but you’re right, looks like a painting. :-) Always try to be creative …
Reply

Peter Oxley Photographer 3 months ago
Thanks Sleiman for your kind thoughts and, of course, for your backup services. Much appreciated!
Reply
6 comments in total

Elizabeth S 3 months ago
Hasedera has so much packed into a small site yet it doesn't feel crowded. The gardeners and architects were geniuses.
Reply Show all 0 replies

Kim 3 months ago
The first photo looks like a painting!
Reply Show all 2 replies

Peter Oxley Photographer 3 months ago
Photo was taken with my Fuji XT-2, but you’re right, looks like a painting. :-) Always try to be creative …
Reply

Peter Oxley Photographer 3 months ago
Thanks Sleiman for your kind thoughts and, of course, for your backup services. Much appreciated!
Reply
6 comments in total