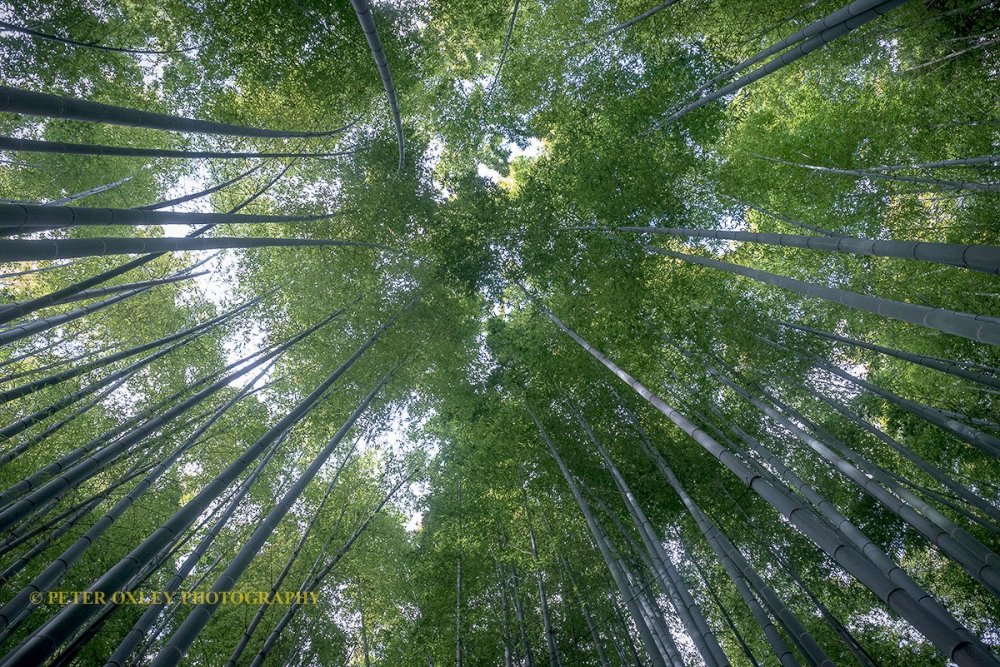 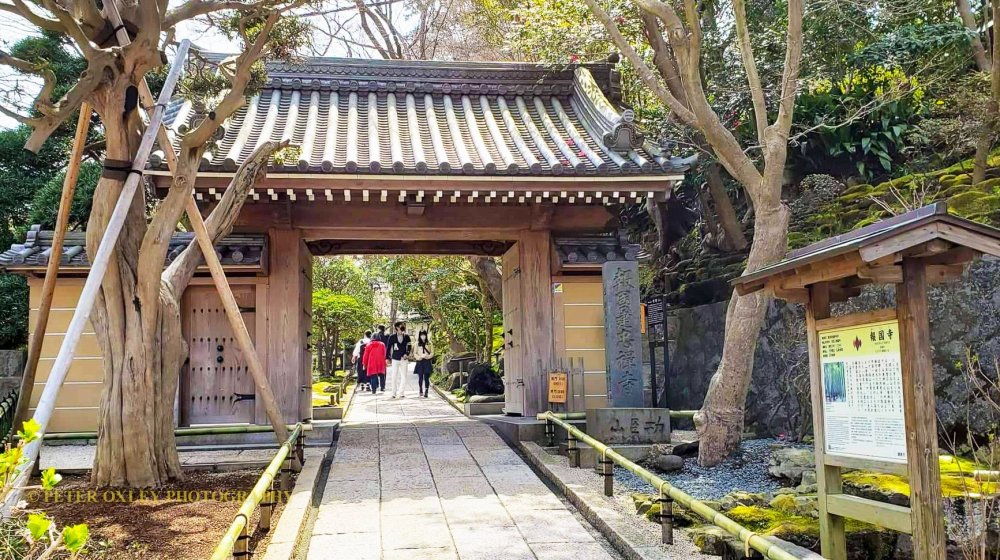 Entrance to the temple 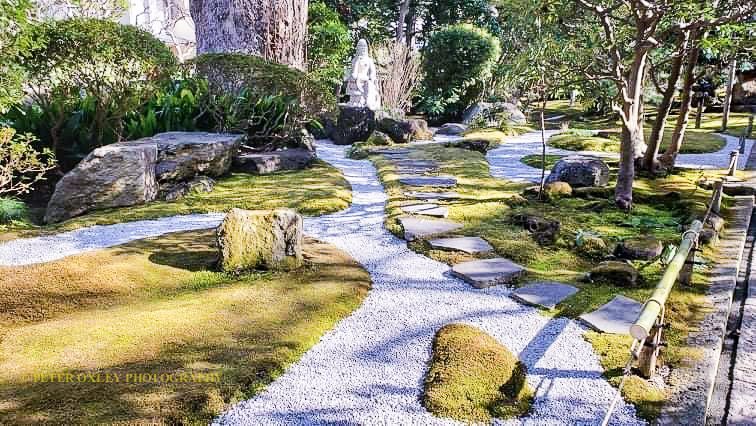 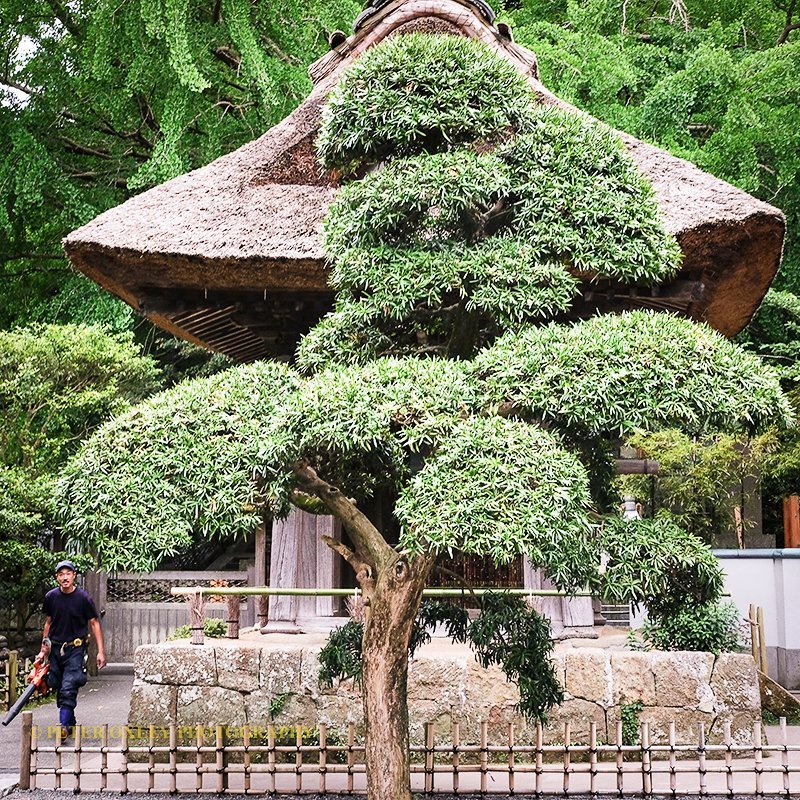 The bell tower with thatched roof 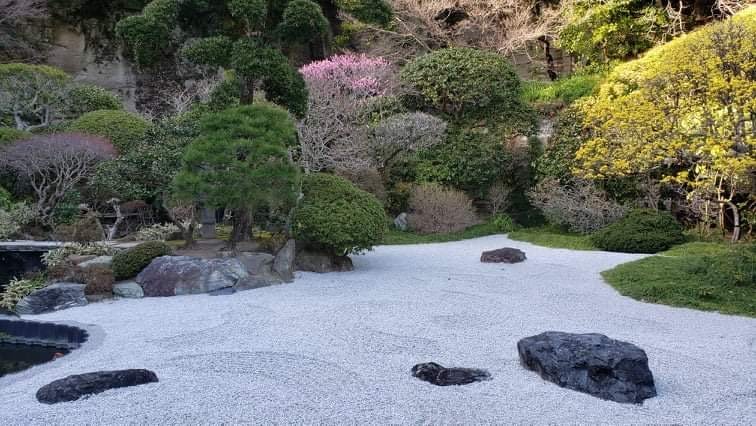 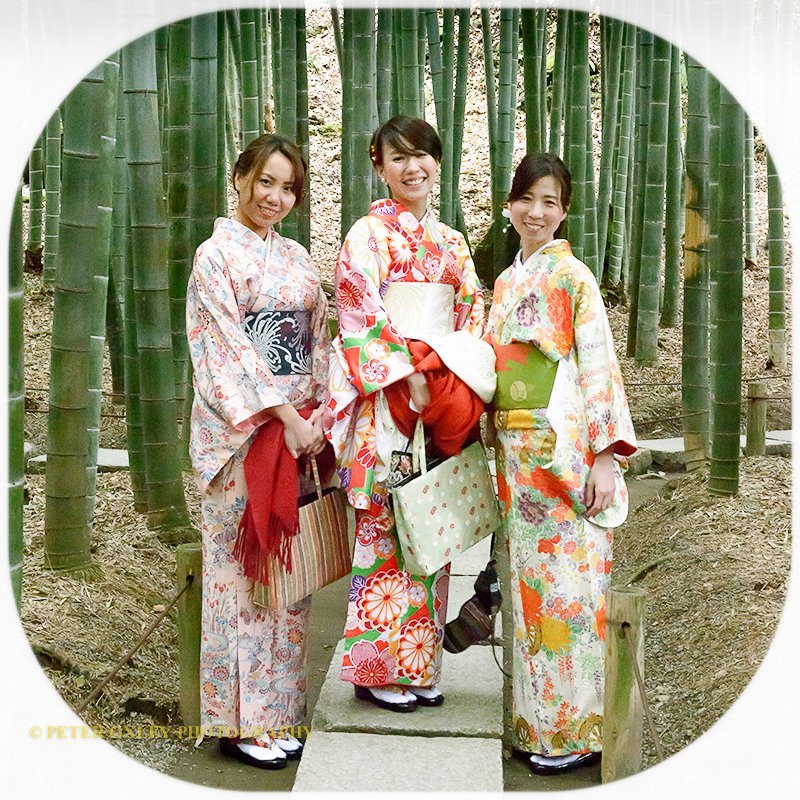 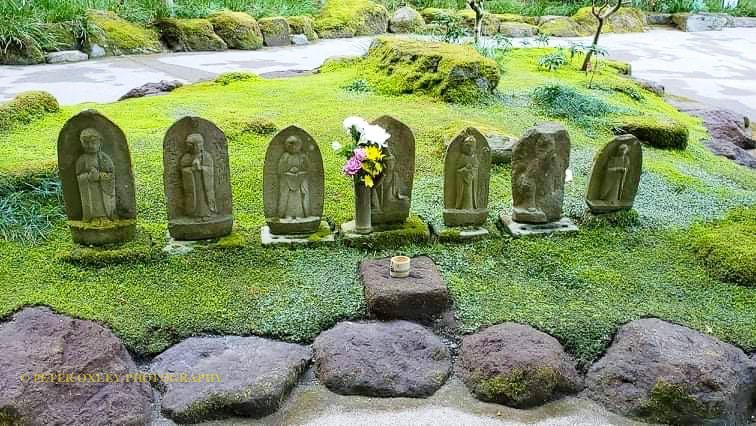 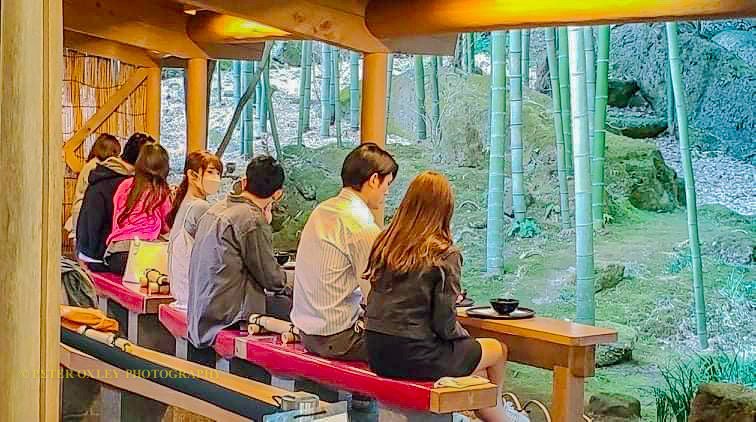 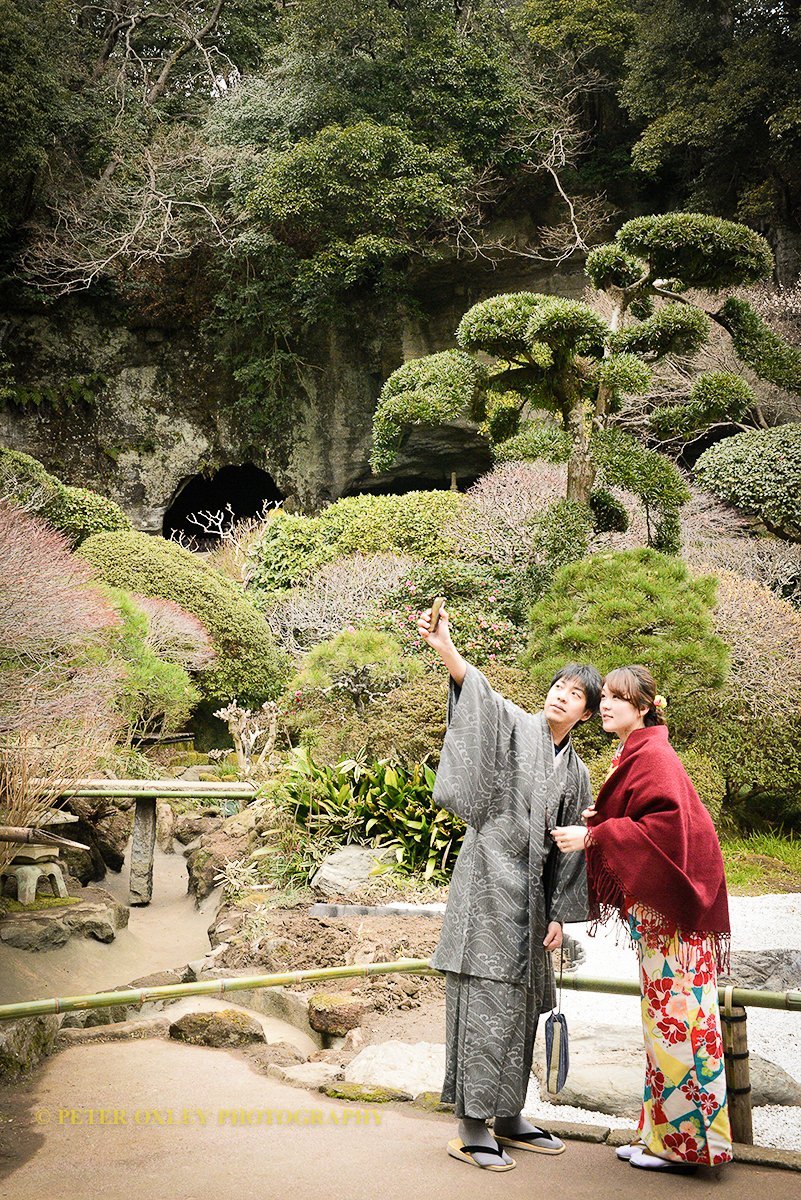 A couple in traditional costume points to the bamboo grove 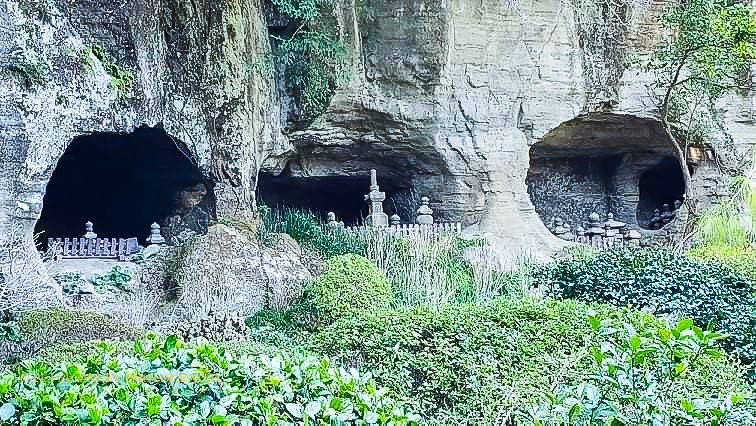 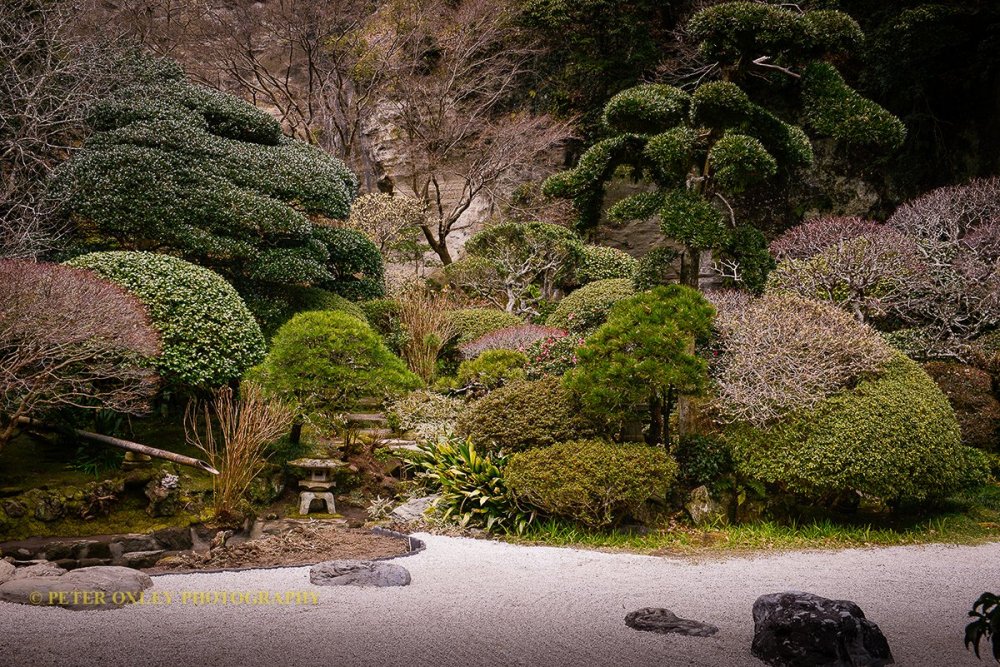 Backdrop to the zen sand garden 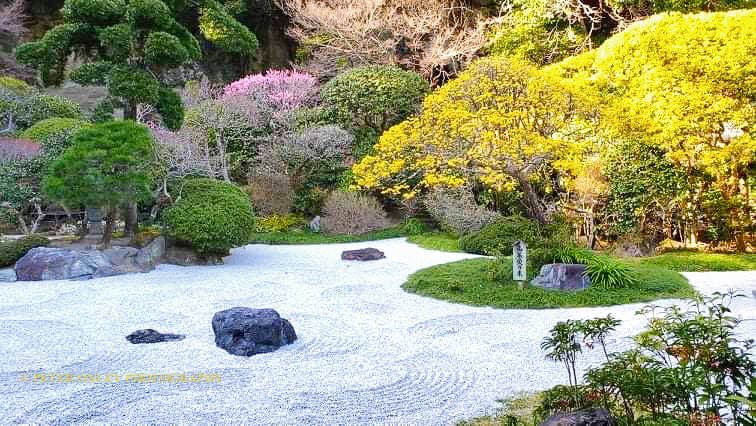 A cornucopia of flowering trees and shrubs 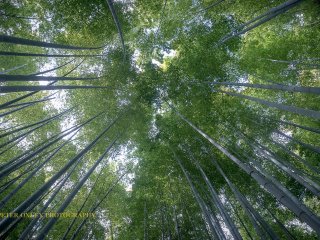 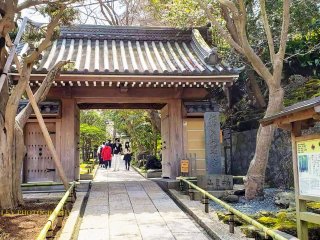 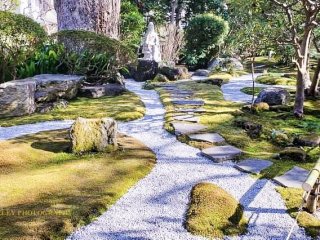 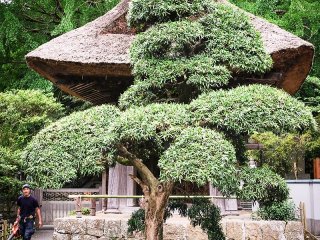 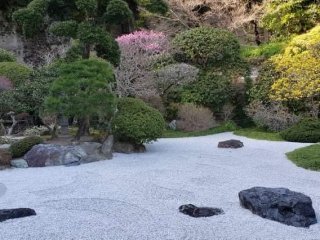 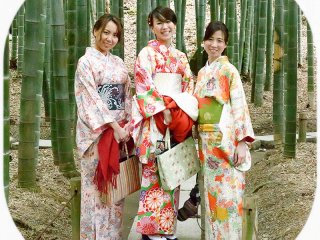 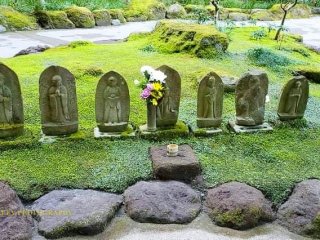 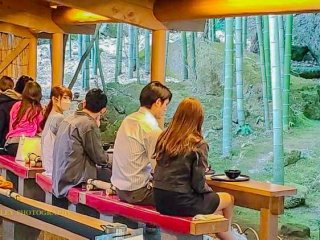 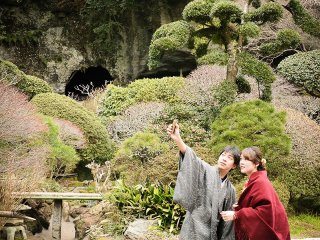 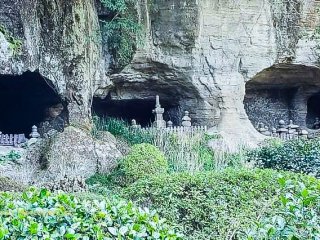 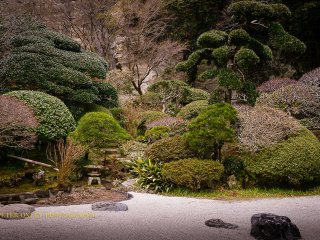 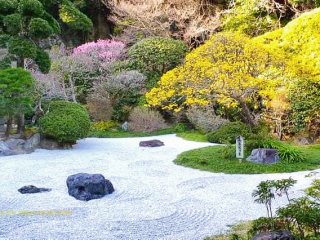 Temple of the Ashikaga Family

Were it not for the telltale gate at the bottom of the slope, one might be forgiven for thinking that one had entered an old Taisho-era residence rather than a temple whose history dates back to the 14th century.

In point of fact, Hokokuji Temple was established in 1334 on the orders of Ietoki Ashikaga, grandfather of Takauji Ashikaga, the first shogun of the Muromachi Period succeeding the Kamakura one. Secluded in the hills on the eastern side of the city, Hokokuji was the family temple of the Ashikaga clan, later adopted by their cousins, the Uesugi.

The main hall was rebuilt in the 1920s after the original was lost in the Great Kanto Earthquake. It houses a statue of the Buddha (Shaka Nyorai in Japanese), the temple’s main object of worship. It is said to have been created by the famous Buddhist sculptor Takuma Hogen who lived nearby.

However, it is not the buildings particularly that make this temple so appealing to visitors from Japan and around the word. It is the layout of the gardens, the bamboo grove, and the teahouse, together with the many visual surprises that await the visitor strolling through the beautiful premises. Hokokuji is a voyage of discovery where one encounters insights into Japan's history and culture as well as its tradition of aesthetics.

I was pleasantly surprised when I revisited the temple a couple of weeks ago after an absence of almost three years. The gardens have been revamped into what almost amounts to a set piece, a sleek presentation of ancient history in the 21st century.

Chiseled stone walkways with stark white pebbles mark the paths along which visitors can roam at leisure, while gazing up in awe at the towering bamboo canopy that commands attention as it sways and rustles in the breeze, filtering the sunlight into a shimmering halo.

On entering the garden, or I should say the front garden, through the aforementioned gate, one is greeted by the welcoming statue of Kannon, Goddess of Mercy and Compassion, sitting under an old gingko tree. Farther up, on the right-hand side, a jizo with red cap and bib ushers you through, while all around are pebbles and moss and an assortment of flowering trees and shrubs.

At the top of the steps, the main hall awaits, while to its left stand the visitor entrance and a picturesque old bell tower with a thatched roof that somehow escaped the destruction wrought by the 1923 earthquake.

At this point, something tells you that you're in for a treat…

Behind the buildings lies a Zen garden of raked white pebbles representing the cosmic sea with asymmetrically shaped and strategically placed boulders, all set against a backdrop of seasonal flowering trees and plants that complement the landscape, each one planted for maximum visual appeal. To the left, there is a small pond with carp merrily gliding to the sound of trickling water channeled through bamboo pipes.

The centerpiece of the garden is the bamboo grove, which comprises more that 2,000 Moso bamboo trees. There are other venues in Kamakura to view bamboos, such as Eishoji and Meigetsu-in, but none so elegant and majestic as those on display here at Hokokuji, and for that reason it's affectionately known as the Bamboo Temple.

Stone lanterns and rows of Buddhist statuary add accent to the visual feast, while in the near distance to the right, a row of cave tombs (yagura) heighten the sensation that you are witnessing history here. Several of the later Ashikaga lords are buried in those caves carved out of the hillside hundreds of years ago!

Behind the bamboo grove is a charming teahouse, Kyoko-an, that serves matcha green tea. It is a good place to sit and relax and contemplate the beauty of nature unfolding around you.

It is said that this site was the annex of the temple where the founding abbot and Buddhist priest, Tengan Eko, wrote poetry. One can only imagine the inspiration he felt in composing his verses in such beautiful surroundings.

Hokokuji is a great place to visit. Manna for the soul. But also tinged with sadness.

In 1438 a civil disturbance broke out and the Kamakura Ashikaga family was defeated. The only remaining family member, Yoshihisa, who was 17 years old at the time, committed suicide in the temple. He was the last of the ancient Ashikaga family in Kamakura. Ironically, Ietoki Ashikaga, the founder of the temple also committed ritual suicide. Which is why Hokokuji is also called the Temple of Tragedy.

Nevertheless, you will enjoy your visit to Hokokuji, this I promise you!

Find out more about Hokokuji Temple.

Peter Oxley Photographer a month ago
Thank you, Kim!
Reply

Elizabeth S a month ago
Hokokuji rivals the temples of Kyoto for beauty and history. When you think about it, so much happened in Kamakura which was once the capital of Japan.
Reply Show all 1 replies

Sleiman Azizi a month ago
That's right. It was once THE political power spot of the country.
Reply

Peter Oxley Photographer a month ago
Thank you, Kim!
Reply

Elizabeth S a month ago
Hokokuji rivals the temples of Kyoto for beauty and history. When you think about it, so much happened in Kamakura which was once the capital of Japan.
Reply Show all 1 replies

Sleiman Azizi a month ago
That's right. It was once THE political power spot of the country.
Reply