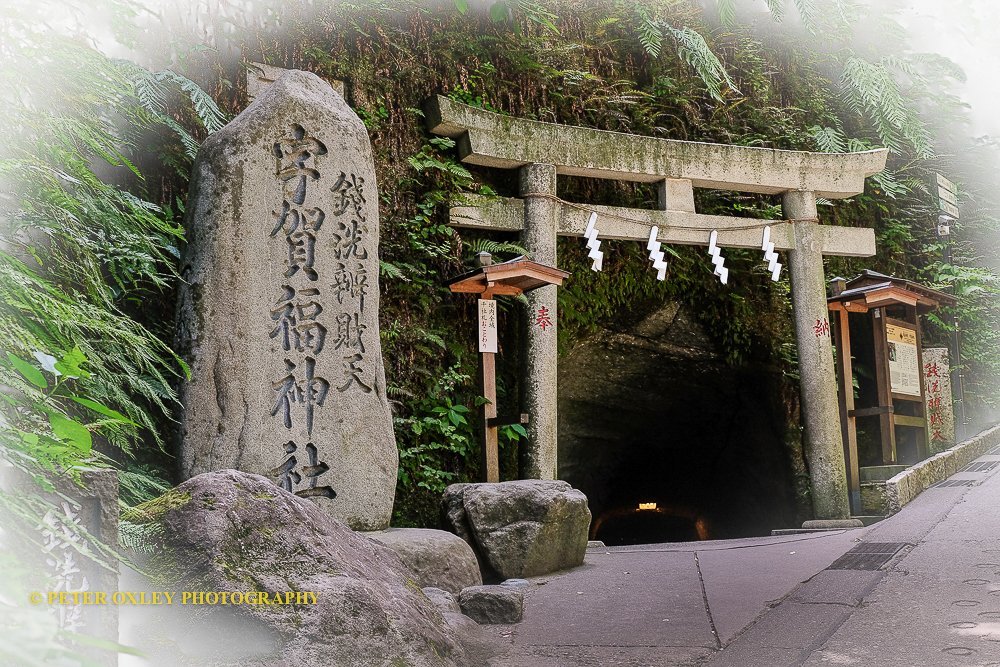 The torii in front of the tunnel, the entrance to the shrine 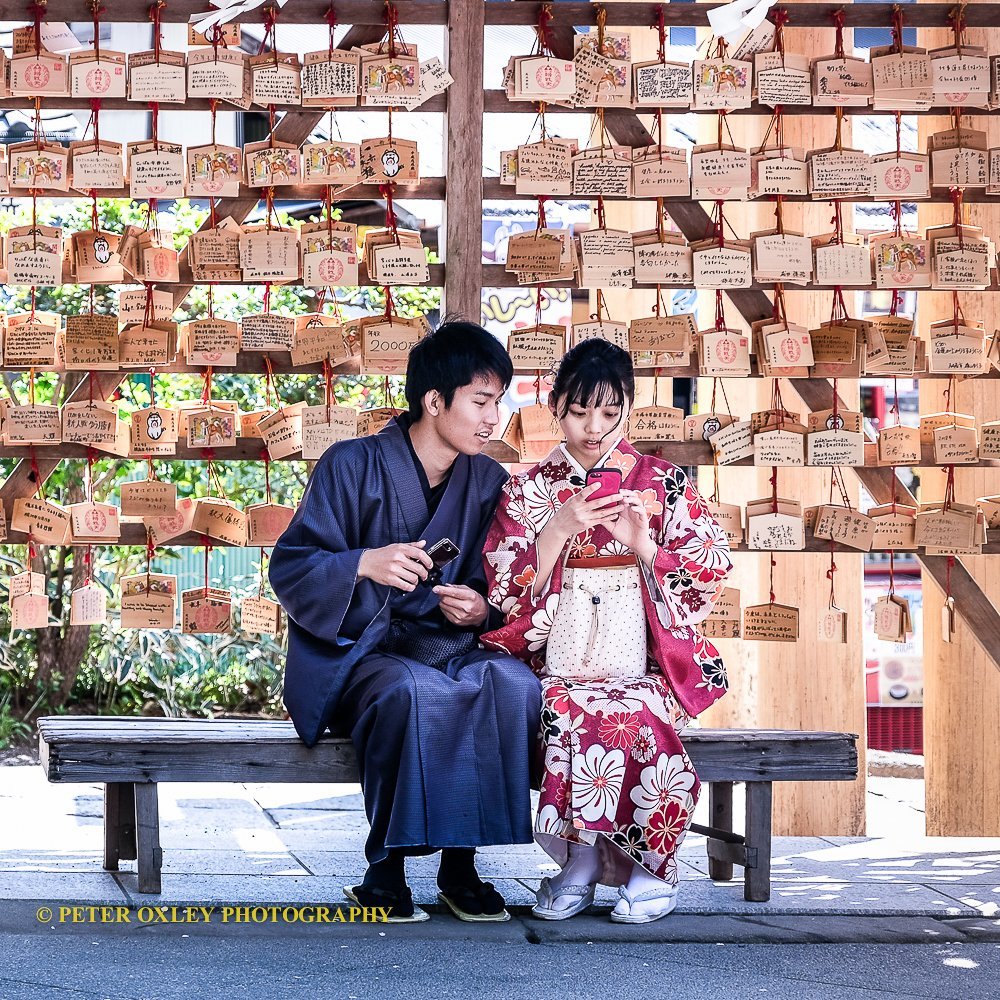 A couple wearing kimono in front of prayer tablets 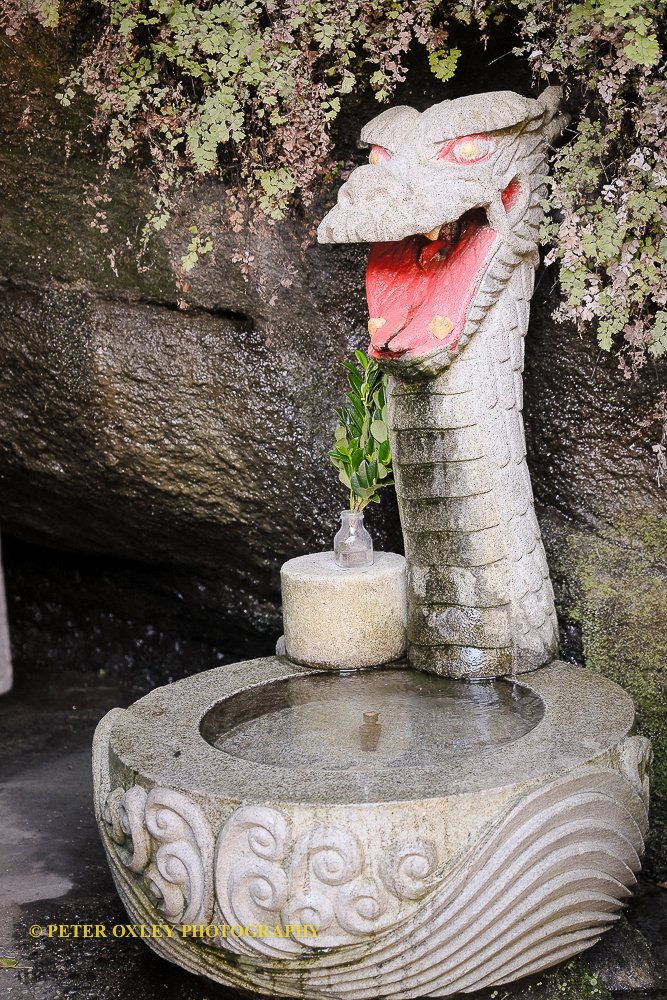 Statue of a snake 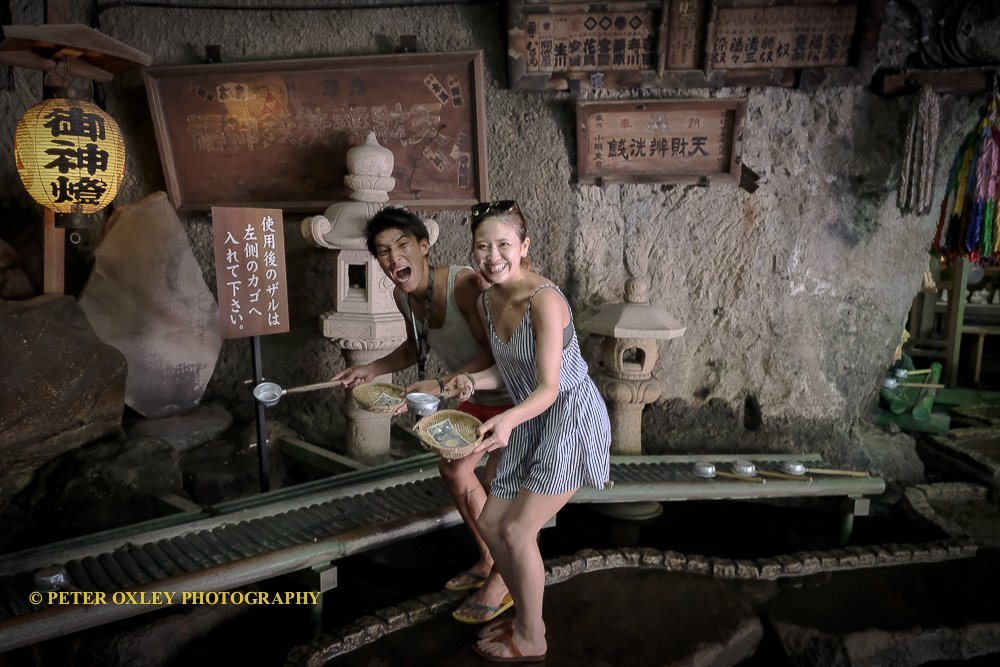 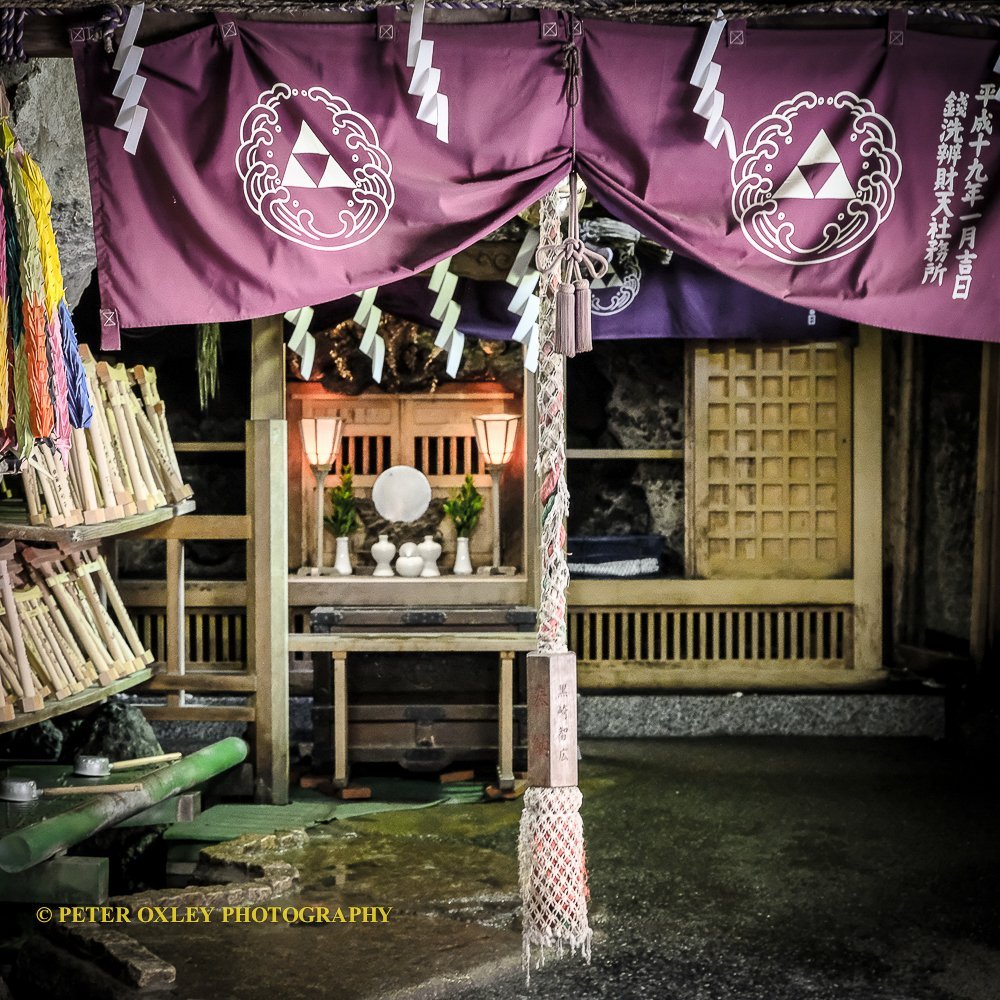 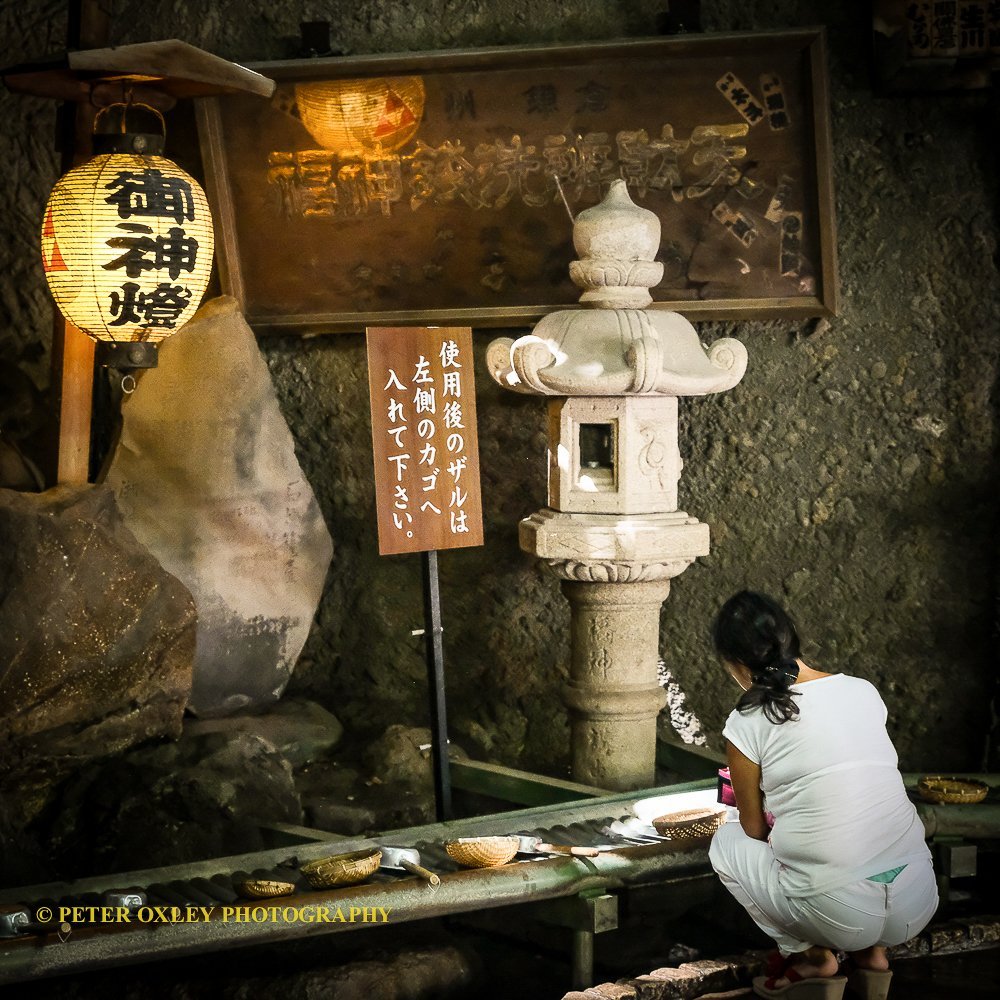 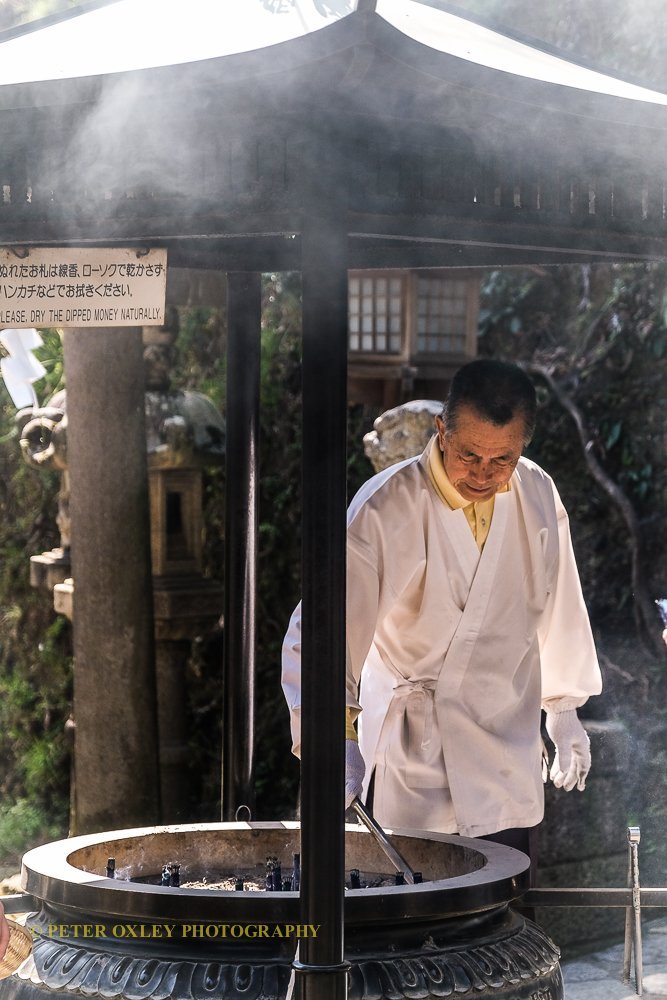 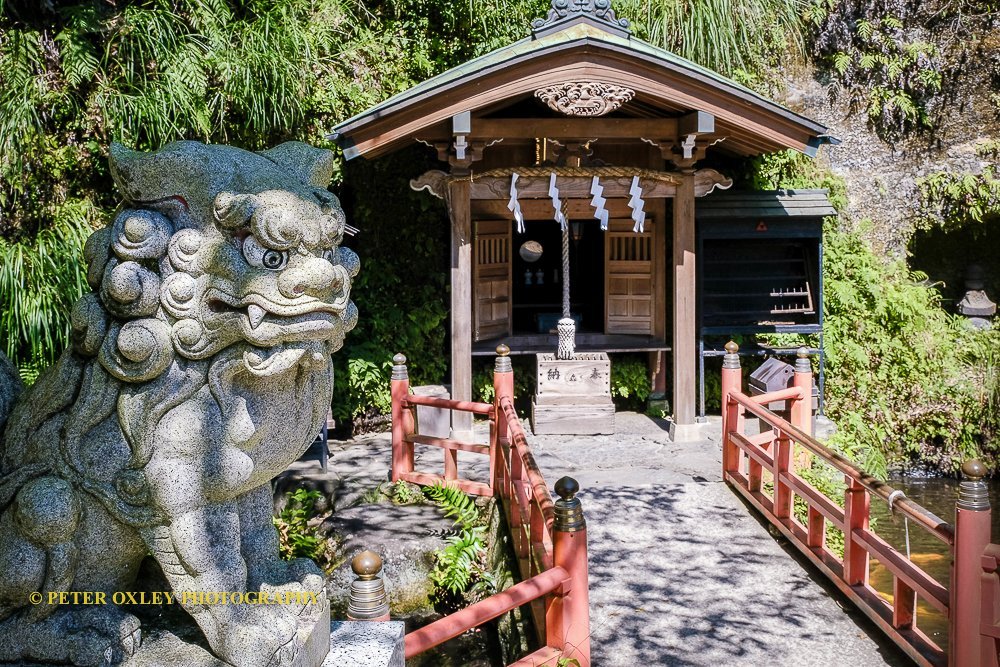 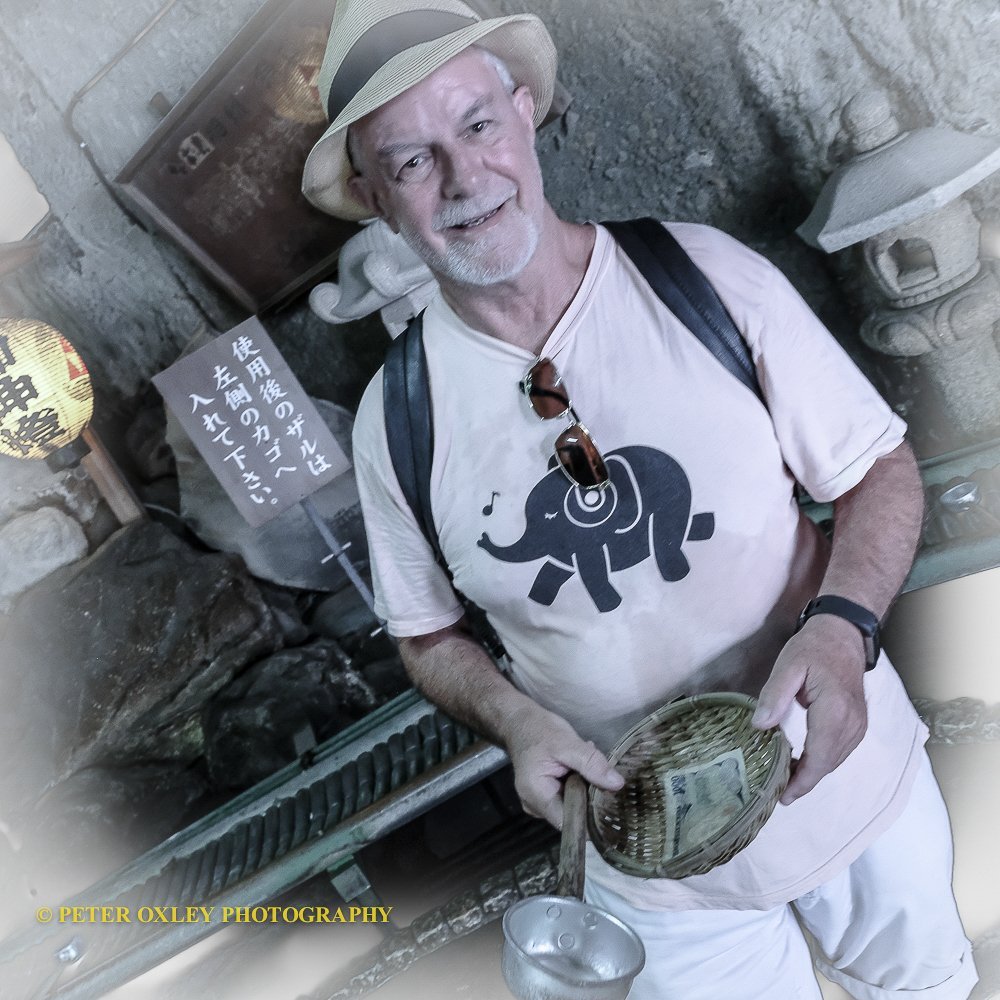 The author hoping for good luck 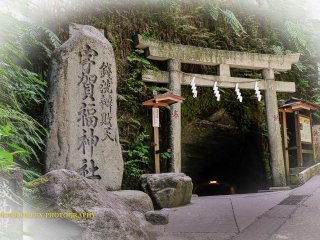 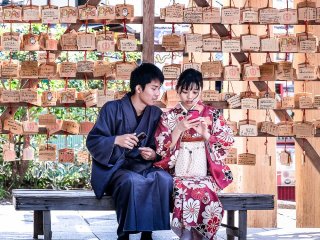 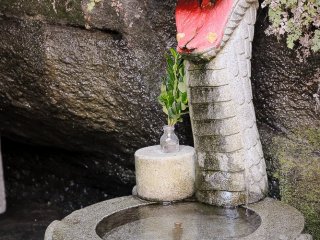 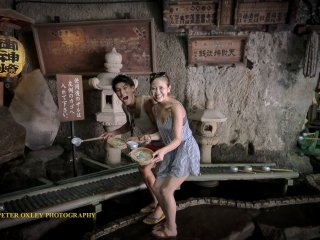 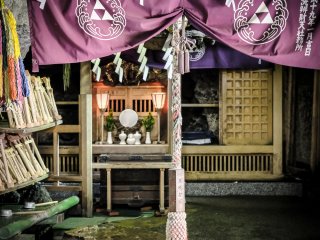 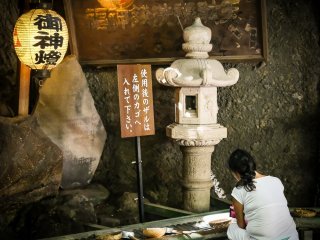 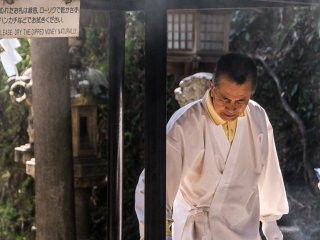 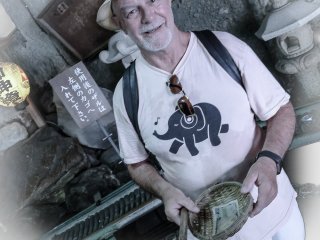 Officially known as Zeniarai Benzaiten Ugafuku Jinja, the shrine was built into the rocky hills of Kamakura as the result of a dream experienced in April 1185 by Minamoto no Yoritomo, the first shogun of Japan’s Kamakura Period (1185-1333). It was his way of thanking the god that visited him in his dream.

Legend has it that on the day of the snake, in the month of the snake, in the year of the snake, Ugafukujin, the Shinto god of harvest and fertility, appeared to Yoritomo in the guise of a human-headed serpent and instructed him to seek out a certain natural spring in a hidden valley to the west where he should pray to both Shinto and Buddhist gods. This, declared Ugafukujin, would bring peace and prosperity to the newly founded shogunate at a time when poverty and turmoil were rife.

For most of Japan’s history, until the Meiji Restoration in 1868, Buddhism and Shintoism existed side by side, with Buddhist temples often erected on sites where adherents worshipped thousands of local Shinto gods in a form of animism.

From 1868, under an edict from the restored imperial throne, Shinto was proclaimed the state religion with the emperor anointed as the divine figurehead. This was to support the revived role of the emperor as head of state, and at the same time diminish the power and the fortunes of the shoguns, warlords, and Buddhist monasteries that had ruled Japan for hundreds of years.

Besides, as Japan entered its newfound nationhood, Buddhism was increasingly seen as an imported religion, whereas Shinto was the homegrown belief. Historically, Buddhism was an offshoot of Hinduism that had taken root in some parts of the Indian subcontinent and Southeast Asia. It then spread to Japan through China, sporadically from the 6th century, gaining a pre-eminent foothold in the 11th and 12th centuries.

After the separation of religions (shinbutsu bunri) in 1868, many Buddhist temples were destroyed, but Zeniarai Benten survived and moreover prospered through an odd quirk of fate.

A Fusion of Gods

Getting back to the syncretic nature of the gods, Ugafukujin is a traditional Shinto spirit, while Benzaiten, also known as Benten, whose origin was the Hindu goddess Sarasvati, is the Buddhist god of anything flowing, like water, music, love, and poetry. Or perhaps a serpent! She is also one of Seven Lucky Gods of Japan, the only female one, and is often depicted with a white snake as her headdress. There is an old belief that should you encounter a white snake, you will meet with good luck. Not surprisingly, a snake tattoo in Japan is believed to protect the wearer against illness and misfortune.

As if it were not enough that peace and prosperity did descend on the land after the first shogun followed the god's instructions in his portentous dream, Hojo Tokiyori, the fifth regent of the Kamakura Period, visited the shrine in 1257, one year after he had given up the regency to become a Buddhist priest. He exhorted the faithful to wash their coins in the spring, as he himself did, in the belief that the coins would be purified by the gods and the devotee would be “rewarded with gold”. Zeniarai translates to coin washing in English.

Since then, Japanese and overseas visitors have come to the shrine to wash both coins and paper money in the hope that their fortunes will multiply in the future. The only caveat, and some say a brilliant marketing ploy, is that once you have washed your money, after it has dried, you should spend your laundered assets as soon as possible.

Zeniarai Benten shrine is a popular venue, particularly among young hopefuls starting out in life. The modus operandi is to buy a votive candle, make a prayer, place your money in a bamboo tray (zaru) lent by the shrine, and pour five or so ladlefuls of holy spring water on the money you wish to have blessed.

The shrine was built in what was a desolate spot approached only by a trail running through the mountains. Today, the trail is called the Kamakura-Daibutsu Hiking Trail. It was only recently in 1957 that a tunnel was constructed through the rocks to give visitors easier access. Perhaps the remoteness partly accounts for the shrine’s escape from shinbutsu bunri.

Inside the grounds you will see two paths passing under a torii, one from the tunnel and one from the trail. There are several Buddhist statues and scripture-related stelae, along with a pond full of carp, a bridge with stone dogs guarding the entrance to a shrine dedicated to the god of water (Mizuhame-no-kami), a hillside shrine devoted to the Seven Gods of Fortune, and a statue of a snake. Of course the main attraction is the spring running through a cave, where the main shrine (Okugo) is housed. Here, visitors line up to wash their money. The air is permeated with the scent of incense, and the grounds are surrounded by high rock walls.

Once your money has dried, there are several places where you can readily spend it, such as the official shrine shop selling amulets and souvenirs, and several concessions where you can buy snacks and, as luck would have it - praise the gods! - an ice-cold beer, one of the very few temples or shrines where this blessed beverage is available for poor thirsty mortals.

Maybe it's a reward from the gods for those of us who have labored the two kilometers uphill from Kamakura Station on a hot summer day. Maybe the shrine is lucky. Who knows? But remember to pray to both Ugafukujin and Benzaiten. That way, you will receive double good luck - at least I hope so.

In the words of the song Happy Talk from the hit musical South Pacific:

If you don’t have a dream,

How you gonna make a dream come true?

The shrine is a 25-30 minute walk from Kamakura Station.

Elizabeth S 2 weeks ago
The Kamakura Daibutsu Trail sure has its treasures.

I see the next Year of the Snake is 2025, and May is the month of the snake. Some luck to be had!
Reply Show all 1 replies

Peter Oxley Photographer 2 weeks ago
It’s amazing how they got to build whatever they built in the late 12th century. Without the tunnel, the area must have been very isolated.
Reply
2 comments in total

Elizabeth S 2 weeks ago
The Kamakura Daibutsu Trail sure has its treasures.

I see the next Year of the Snake is 2025, and May is the month of the snake. Some luck to be had!
Reply Show all 1 replies

Peter Oxley Photographer 2 weeks ago
It’s amazing how they got to build whatever they built in the late 12th century. Without the tunnel, the area must have been very isolated.
Reply
2 comments in total