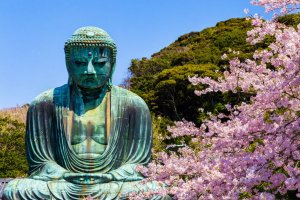 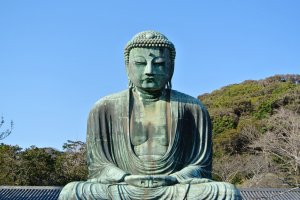 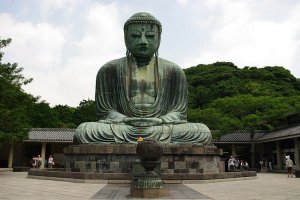 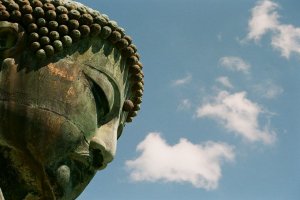 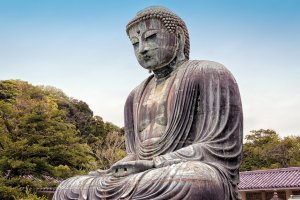 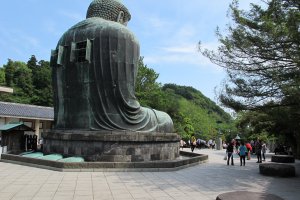 Kamakura's Daibutsu is a beautiful bronze statue of Amitabha Buddha that was erected in the Kotoku-in Temple in the middle of the 13th century (750 years ago). With a height of 11.3 meters, it is the second tallest bronze Buddha statue in Japan that only is surpassed by the statue in Nara Todaiji Temple.

The Buddha has been meditating in the open air for about 500 years after the temple hall in which it was originally housed was destroyed several times by tsunamis and typhoons.

When you visit, you might see him drenched in the rain, sweating under the blazing sun, or just enjoying the warm spring sunshine. Kamakura's daibutsu has been kept intact without major restorations since it was built.

See the fleck of gold leaf on the Daibutsu’s right cheek? The original Daibutsu was entirely covered in gold. Kamakura’s Daibutsu was made of bronze (68.7% copper, 9.3% tin, 19.6% lead) and so it was impossible to plate using the techniques of the era. Instead, they attached gold leaves directly to the body.

The length between the inner and outer corner of the eye is about one meter. The ears are 1.95 meters tall. This impressive statue is 13.35 meters tall and weighs 121 tons. It was created step by step, in more than ten incremental pouring, starting from the bottom and moving up to the head. You can even see the linear borders of each pouring.

You might notice the several stones scattered around the statue. The surface of these stones is flat. They are thought to have been the foundation stones of the building that once housed Daibutsu. That building was destroyed and rebuilt before they finally decided to leave Daibutsu outside under the moon and the sun. At one time, there were thirty-two bronze lotus petals at the base of the statue, but today only four remain, and they are no longer in place.

From 8 am to 4:30 pm, venture inside the Daibutsu for only 20 yen. Simply drop your coins in the box at the Diabutsu's back entrance. Marvel at the inner ringers of the Daibutsu and see how it was cast, layer by layer. Visit your own tranquility within this solemn interior.

You can reach Daibustu in three ways, by the Enoden (tram), by bus, and by foot. If you choose the Eno-den, please get off at Hase Station. After passing through the ticket gate, turn right and walk for 7 minutes. If you take a bus, the bus will leave from an East gate terminal (#1 or #6). Pay when you get off at the front of the bus. The fare will be 190 yen. Get off at the “Daibutsu-mae” stop, the one after Hase Kannon. This bus stop is a bit tricky. After you get off the bus, walk back in the direction your bus just came from, and cross the street at the signal. The entrance to Daibutsu is on the left. If you get there in the afternoon, you’ll be fine—just follow the crowds. But if you are an early bird, and no one is there in the morning, it might be confusing. Finally, if you follow a map, walking to Daibutsu is quite easy. You can enjoy a nice stroll. The back streets of Kamakura are beautiful!

The great Daibutsu of Kamakura is one of the greatest, most popular and most beloved statues in Japan, and indeed, of all the world...

Going to Kamakura? Then the Great Buddha might be the most obvious place to visit!

Visiting the Great Buddha in Kamakura brings peace and serenity.

The Great Buddha of Kamakura

The Great Buddha of Kamakura (Kamakura Daibutsu): Daibutsu has been a symbol and anchor for people in Kamakura, and now is lov..

If you visit Kamakura (and you should!) be sure that you do not miss seeing the famous Daibutsu - or Great Buddha - statue

The Making of Kamakura Daibutsu - 2

In this second article, we’ll look at some of the unique physical features of Kamakura Daibutsu and what they mean.

Inside the Kamakura Daibutsu

Are you planning to visit Kamakura as a side trip from Tokyo? If so, it must mean that you will visit the Daibutsu, or the Great..

The Making of Kamakura Daibutsu - 1

Knowing how Daibutsu was made (in the mid 13th century) is quite interesting and will help you appreciate your visit there much..

Morito Shrine: A Sacred Place by the Sea

Morito Shrine in the town of Hayama, Kanagawa Prefecture, is one of the most famous shrines in the Shonan area. With its beautiful..

On the coast about an hour south of Tokyo, Kamakura and Enoshima are popular with visitors to Japan. There are a number of ways..

The author takes a look at the Great Buddha in its historical and cultural context to give you a deeper appreciation of this greatly..

An atmospheric temple dedicated to the fox, messenger of the gods, Sasuke Inari Jinja is nestled in the hills of the Hidden Valley...

Established on the premise of a dream by the shogun to bring peace and prosperity to the land, Zeniarai Benten offers visitors the..

Taisen-kaku is a 100-year-old inn just seconds away from Hase Kanon Temple. The service they provide will leave you with a memorable..

Fujisawa is located close to such popular tourist destinations as Enoshima and makura. A traveler can get everything necessary for..

Enoshima's Iwamoto-ro is a Japanese ryokan inn situated on the right side of the main street, facing west. All of the rooms..

Discover the taste that Kamakura locals are in love with. New German's fluffy custard-filled sponge cakes are a dessert that is sure to impress. The..

Taste Aratama's famous fried pork cutlet and fall in love with the fresh flavors. Tonkatsu isn't all that's on the menu. Be sure to try Aratama's..

Kamakura’s Hasedera Temple, a sister temple to Nara’s temple of the same name, is renowned for its 11-headed statue of Kannon, the goddess of mercy...

Sasuke Inari Shrine is a Shinto shrine in Kamakura and the site of the Hidden Village of Kamakura. It is located very near the Zeniarai Benzaiten Ugafuku..