The Gems of Kyushu: Nagasaki and Kumamoto

Kyushu, located south-west of the main island Honshu, is Japan’s third largest island with Fukuoka as its capital. The seven prefectures of Kyushu offer a wide range of historic, modern, and natural landscapes. Compared with the bustling city of Tokyo and the often overcrowded historical Kyoto tourism area, Nagasaki and Kumamoto have the perfect balance of delicacy, scenery, and historic stories to uncover.

I took a short trip to Nagasaki and Kumamoto, located on the north-west part of Kyushu. For most tourists, the main purposes of heading to Nagasaki and Kumamoto are to visit the atomic bomb site from World War II and Kumamoto Castle. There are many recommendations for these common tourist attractions so I will not touch on those in this post. Instead, I would like to share several peculiar sites that might pique your interest!

By car, it takes around 2 hours at 100 km/h, but there is actually an alternative to commute between the two places!

The Ocean Arrow ferry, which links Shimabara port and Kumamoto port, cuts through the Ariake Sea directly. It takes only 30 minutes, and you can choose to board with your vehicle, perfect for road tripping around Kyushu. For adults, it costs 1000 yen for one way and 1,900 yen for a round trip. For children, they are 500 yen and 950 yen respectively. Depending on the size and capacity of vehicle, the costs start from 3,100 yen. There are around 7 departures in a day starting as early at 07:30 and ending at 18:30. For further information on times, check the official website.

The ferry is incredibly convenient and the interior design beautiful. There are a couple of seat types you can choose from: inclining seats with more leg room (extra charge), couches, sofas, individual seats that look out into the sea, and basic commuter seats. Souvenirs, food and beverages are also sold on the ferry at reasonable prices.

If the weather is nice, be sure to take in the sea breeze as you ride along. Flocks of seagulls will often follow your ferry creating a fun atmosphere. It was my first time seeing so many birds queuing for food! Experience the thrill of feeding seagulls with bread or crackers on the outdoor deck. They come at you. They really do.

This is a sloping road from near the seaside street to the hills. The Netherlands is called ‘Oranda’ in Japanese and it came from the world ‘Holland’. Nagasaki has a history of having Dutch merchants in the 17th century. However, there were many other Westerners in the 1800s from Britain, France, and America. Nagasaki citizens deemed them all the same and called them ‘Oranda-jin’ (Dutchman). This place is also near to the Glover Garden open-air museum.

I had a lunch at Oranda Bussankan (produce shop). You can get many Nagasaki-produced souvenirs here and on the second floor is a nice Nagasaki-style restaurant.

Nagasaki dishes resemble Chinese dishes a lot. The large plate of green and pink thing on the left is called the Chanpon, the most famous dish from Nagasaki. There were cabbages, dried noodles, bacon, vermicelli in the dish. Certainly a must-try.

If you walk downhill, there are many castella cake shops around. This is also one of the most famous omiyage (souvenir) in Nagasaki. I happened to walk in this one because it looked authentic, and the hospitable servers gave us some samples and made tea for us. According to a castella cake expert, the cakes here are of the right thickness and sweetness.

As mentioned above, there were many Westerners who came to Nagasaki as merchants since 1859 with the opening of Japan’s ports. Oura Catholic Church emerged as a place of worship for European residents arriving in Nagasaki. The church is especially significant considering the difficult history of Japanese Christians during the years when they were largely oppressed by the Tokugawa Shogunate.

I found the architecture and atmosphere to be quite interesting, and also greatly enjoyed the painting in the information center. This painting is a depiction of ‘Hell’ drawn in the 1900s, and it was my first time seeing how hell is depicted from a Japanese point of view. What was interesting is the Asian faces and Asian devils incorporated with the idea of western hell. As usual, faces in Japan are always painted uniformly.

If you refer to the first Google Map photo screenshot above, you can see two other destinations – Obama Onsen Hotto Futto 105 and Unzen Hell. No relation to the American President Obama, but it is written as 小浜温泉 with the two first Kanji characters pronounced as Obama.

This place is known for having the hottest and most active springs throughout Japan. The number 105 came from the fact that water temperature reaches 105 degrees Celsius. Obama hot springs contain sodium chloride and are known to cure neurological diseases, rheumatoid arthritis and fertility for women. Due to natural salt in hot water, food there is more flavorful! This is also a great place to catch a sunset. Immerse your legs into the hot-warmish water and enjoy the vast sea views.

About an hour and a half drive away from Nagasaki City, this is a good stop if you travel from Nagasaki to Kumamoto because Unzen is right in the middle. This is a great place for onsen and ryokan (Japanese style hotels). As this is in the mountainous area, it tends to rain frequently. When it rains, it gets misty and you don’t get very nice pictures. This time, I was lucky! The cloudless blue sky was my best friend.

I think Japanese really do like to exaggerate; they call hot water and gases spouting out of earth as hell -地獄, especially in the area of Beppu, where it is known as the capital of hot spring in Japan.

You get to walk around the steamy area with the company of sulfur in the air. In this place, the grandiose and fierceness of earth are mixed really well. The temperature here varies greatly in the seasons and at times can be quite humid or quite dry.

Twice I visited Unzen, twice I stayed in this Japanese-style hotel. The onsen is amazing and the food is nice. They also have the outdoors onsen where you can do star-gazing while soaking yourself in the hot water.

Be sure to enjoy a course dinner in Tatami banquet room. This was a great combination of seafood and nabe (hotpot) ingredients. Nothing in this world is better than enjoying great food and tea after onsen in Japan.

This must-stop-and-see shopping district is located right beside Kumamoto Castle, which is under renovation at this point of time due to the quake. Visitors can experience some of Kumamoto’s culture in a variety of hands-on and interactive exhibits.

I tried this Ginnan buffet restaurant out and it was fusion Japanese-western food restaurant. Only 1,500 yen per person for all you can eat and the food is pretty delicious.

The ambience of the place is elegant and chill. There is a variety of pizza, pasta, gratin, tempura, oden, miso soup, salad and more. I really liked the desserts they have too. There were at least 10 choices. There are also some very nice looking desserts.

If you are a fan of Kumamon, the big black bear of Kumamoto, you should definitely check this place out. They have the an expansive collection of merchandises and you get the chance to see real Kumamon. Admission is free.

Check the website (https://www.kumamon-sq.jp/en/) to view the schedule. Be sure to be there early because it is quite crowded, and there was another crowd outside this area just because they were not allowed in due to the quota constraints.

It can be quite refreshing to visit the obscure places of Japan. Flocking to Tokyo and Kyoto is a good idea, but they are often overly crowded and designed for tourists. The big cities are not representative of the real life of the country and the way of life in rural Japan. I have learned so much more travelling into the villages and cities of Japan and highly recommend getting out on your own and exploring the Kyushu area. 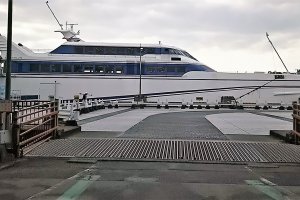 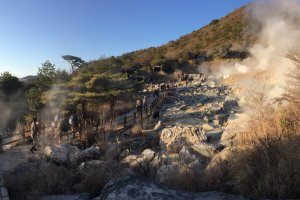 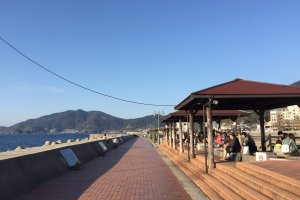 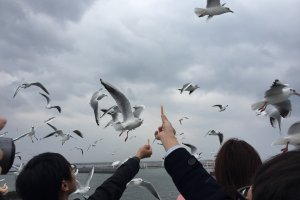 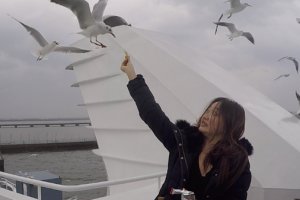 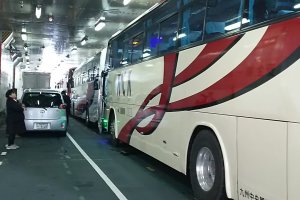 Yui Yamaguchi 3 years ago
Ocean Arrow is really convenient. We don't have to drive long way!
Reply Show all 0 replies
1 comment in total