If you're craving something above and beyond the typical conveyor belt sushi, it's worth seeking out the fish specialists at Uoichi in the back streets just south of Kumamoto's Lake Ezu.

While the residential neighborhood might seem a rather incongruous place to find a fine fish restaurant, the chefs at Uoichi source all of their menu items from the islands of Amakusa, just off the western coast of Kumamoto Prefecture. Some of their fish, coming direct from suppliers, are even kept alive in aquariums in the front of the restaurant, allowing diners to witness the tank-to-table journey of their meal. Uoichi only serves seafood that is "in season" so you might not find your typical sashimi choices here on any given day.

Many people come to Uoichi for a sample of their sashimi and the chefs have options to suit most budgets. A small plate of a variety of raw fish might only set you back ¥1050, though if you want a pricier fish or an even better cut, all you have to do it ask and they'll work within your budget to arrange your meal.

For a special occasion, however, the staff will arrange a full-course kaiseki experience for you, ranging from ¥3000 to ¥5000. I recently went with friends to a lunch at Uoichi that revolved mostly around ise-ebi (Japanese spiny lobster). The meal begin with the entire body of the spiny lobster being presented and the meat of the body offered as sashimi with a squeeze of lemon. It was accompanied by a few other selections of sashimi (the black sea bream was my favorite), a creamed pumpkin salad and some delicious baked fish. That was soon joined by tempura with freshly grated yam and an entire buri (yellowtail), chopped up and served in a thick syrupy sauce made of soy sauce, mirin and sake. Egg custard was next before we moved on to the head of the spiny lobster, presented in a soup. Rice and pickles rounded out the savory aspects of the meal and we were treated to a smooth black sesame pudding as dessert.

Whether you come to Uoichi for just a small plate of sashimi or one of their fine full course meals, I doubt you will walk away disappointed.

The restaurant is best reached by car (they have a tiny parking lot right next to the building) or can be reached via short taxi ride from nearby Lake Ezu or the Suizen-ji Park stop of the Kumamoto tram line. 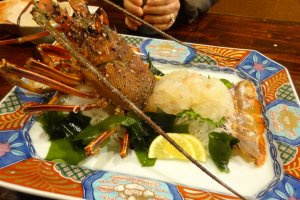 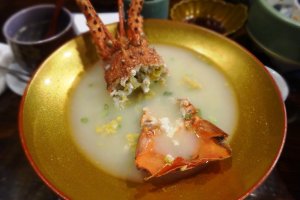 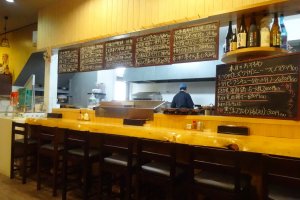